Significant progress continues to be made with regard to research on high capacity lithium ion batteries. In particular, the solid-solution xLi(Li1/3Mn2/3)O2-(1-x)Li(Mn1/3Ni1/3Co1/3)O2 has become the focus of attention as an active cathode material since it exhibits a high discharge capacity of 200 m×A×h×g-1 or greater by charging above 4.5 V vs. Li/Li+[1]. but loss of oxygen and Li2O occurred in the higher voltage region, which caused irreversible capacity and degradation of cycle performance. On the other hand, this system, however, is still characterized by many unknowns, including its crystal structure change during charge-discharge process and the origin of the high discharge capacity. So as to resolve this problem, in this study, we performed the neutron and synchrotron X-ray diffraction measurement for Li-rich solid solution cathode material Li7/6Mn3/6Ni1/6Co1/6O2, and analyzed the average structural change in the initial discharge process. Additionally, we tried to clarified changes of the local and electronic structures during the initial discharge process using pdf (pair distribution function)  method by neutron and synchrotron X-ray total scattering and X-ray absorption fine structure (XAFS).

We prepared Li7/6Mn3/6Ni1/6Co1/6O2 solid solution material by a copricipitation method. These samples were characterized by X-ray diffraction, ICP-AES. Their cathode properties were investigated by charge-discharge cycle tests. In order to clarify the average and electronic structures[2], we measured neutron (iMATERIA: J-PARC) and synchrotron X-ray diffraction (BL19B2, BL02B2: SPring-8), and then performed the Rietveld (RIETAN-FP, Z-code) and MEM (maximum entropy method) analyses (Dysnomia, Z-MEM). As for the local structure investigation, the PDF method was applied to the neutron(Nomad: SNS) and  synchrotron X-ray (BL04B2: SPring-8) total scattering patterns. In addition, XAFS spectra were measured (BL14B2: SPring-8, BL7C: KEK-PF ). These analyses were carried out for the cathodes of Li7/6Mn3/6Ni1/6Co1/6O2  in the initial discharge process changing discharge depth as well as pristine samples.

Li7/6Mn3/6Ni1/6Co1/6O2 is assigned to space group C2/m, which is associated with an ordered arrangement within the transition metal layer.  In order to study in detail the  structural change in the initial discharge process changing discharge depth(2.0, 3.3, 3.5, 3.8, 4.8 V vs Li/Li+ at the peak of dQ/dV plot), the average structures was analyzed by Rietveld method using neutron and synchrotron X-ray difrraction.  From the neutron diffraction results, a significant reduction of the a-axis and bond length of 2c(Li)-4h(Li) were only show by in the first discharge process and not show. In the second dischrage process.

This work was supported by JSPS KAKENHI Grant Number 25420718 and Tokyo Ohka Foundation for the Promotion of Science and Technology. 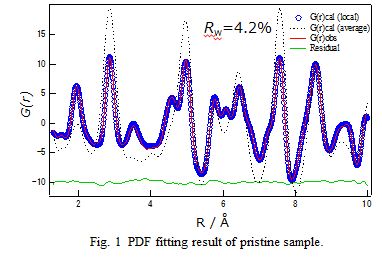