Sunrise, 2nd Floor, Star Ballroom 1 (Moon Palace Resort)
M. A. McArthur, N. Hordy, S. Coulombe, and S. Omanovic (McGill University)
Much research has gone into the advancement of products containing carbon nanotubes (CNTs).  However, very little-to-no CNT-containing devices actually make it to the commercial distribution stage.  This is surprising as multi-walled CNTs (MWCNTs) have excellent mechanical and electrical properties and have potential use in a myriad of applications; specifically, electrochemical energy storage devices.

It is well known that carbonaceous materials are good electrodes for electrochemical capacitors (supercapacitors (SCs)) owing to their relatively large double-layer potential region (ca. 1 V in aqueous electrolytes), global abundance, possibility of achieving structures of high surface area, and their low cost.1  However, in the case of MWCNTs, specific capacitance (Csp) values are quite low (ca. 30-50 F g-1).  Hybrid capacitors, whose capacitance is derived from both electrochemical double-layer and pseudocapacitive properties, are being developed to increase the Csp of various carbons.  Hybrid MWCNT SC electrodes have achieved specific capacitances upwards of 130 F g-1.2  However, larger values are still desirable to decrease size/volume, mass, and overall cost of electrodes.

In this talk, a presentation of our work on the development of a simple, two-step method to synthesize an improved hybrid SC electrode is given along with the results of preliminary surface and electrochemical analyses and performance data.  We show that grafting stably immobilized oxygen-containing functional groups to MWCNTs grown on stainless steel surfaces leads to the largest specific capacitance for any binder-free electrode reported to-date.

Thermal-chemical vapour deposition (t-CVD) was used to grow MWCNTs directly onto a 316 stainless steel mesh (400 series) according to the method presented in ref.3  The MWCNTs were then exposed to a low pressure Ar/C2H6/O2glow-discharge to immobilize oxygen-containing functional groups onto their surface, thus forming plasma-functionalized MWCNTs (f-MWCNTs).

The f-MWCNTs were characterized by XPS while the f-MWCNT SC electrodes were characterized using galvanostatic charge/discharge (GCD) cycling and electrochemical impedance spectroscopy (EIS) to determine the electrode’s specific capacitance.  Fig. 1a displays surface chemistry survey results from XPS showing the presence of oxygen-containing surface groups on the f-MWCNT SC electrodes.  Further, the results show that the functional groups are stably bound even after 300 GCD cycles.  Figs. 1b and 1c support the survey scan by examining the C1s peak before and after plasma functionalization (b) as well as after 100 and 300 GCD cycles (c).  Stability of the f-MWCNT SC electrodes is excellent even after many GCD cycles.

Fig. 2 shows typical Csp values with GCD cycle number (a) and the potential curve used to compute these values (b).  From GCD, a maximum of ca. 200 F g-1 was recorded at 0.2 mA cm-2 after stabilization of the electrode.  Using EIS, a similar Csp value of 251 F g-1was determined.

We believe the reason that the Csp of our own f-MWCNT SC electrodes is so large is due to the large number of MWCNT defect sites introduced during t-CVD growth combined with the large surface-to-volume ratio of f-MWCNTs.4  These defect sites act as excellent anchor points to immobilize oxygen-containing functionalities.  It is these functionalities that lead to a source of additional charge which increases the total capacitance of the material. 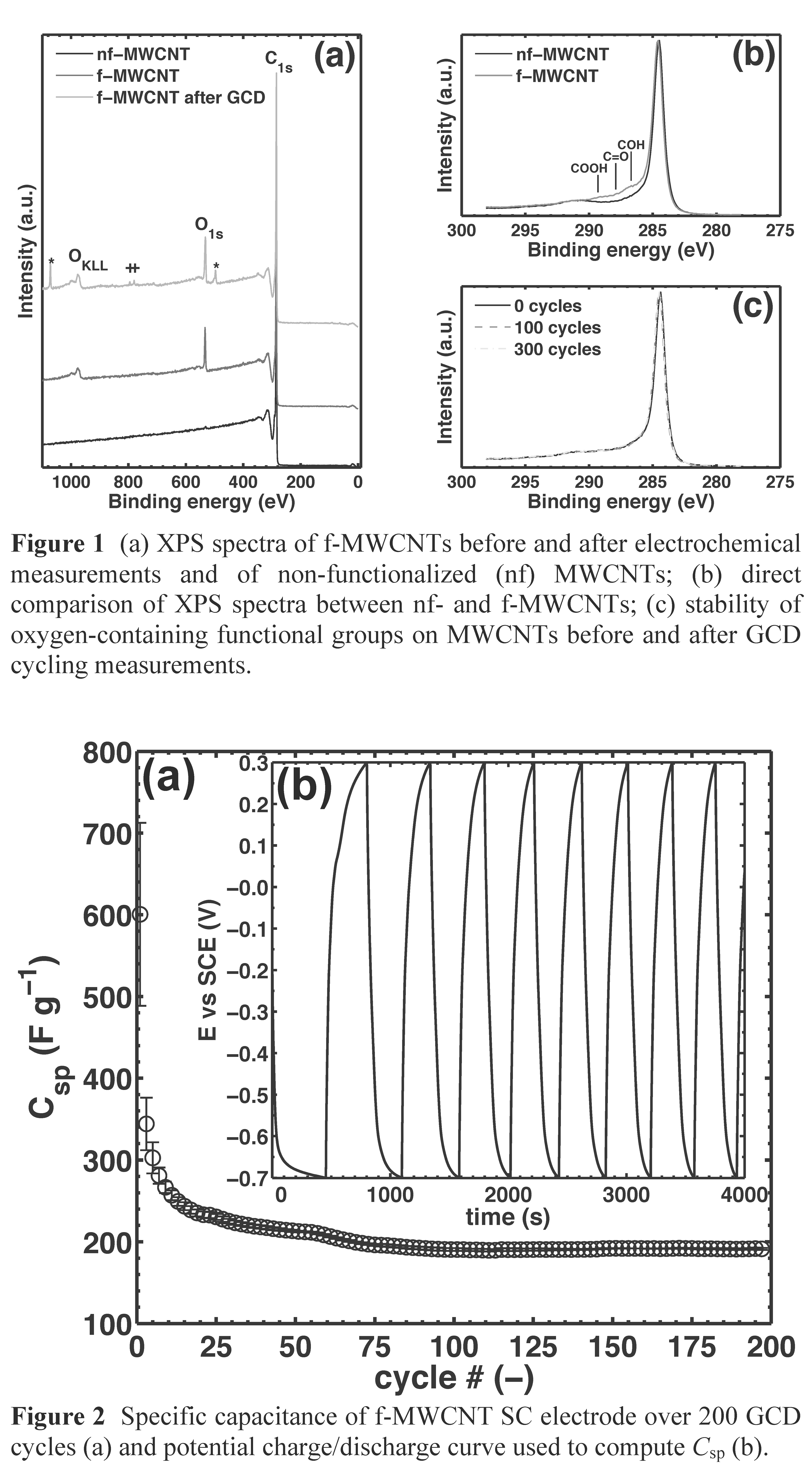