Sunrise, 2nd Floor, Star Ballroom 8 (Moon Palace Resort)
M. Chisaka (Depertment of Electronics and Information Technology, Hirosaki University) and H. Muramoto (Toyohashi University of Technology)
Among the non- platinum-group-metal catalysts for polymer electrolyte fuel cells (PEFCs), only oxide and oxynitride catalysts containing either group 4 or 5 metals have been found to be stable in acid media using inductively coupled plasma-atomic emission spectroscopy.1,2 The high stability motivated us to investigate the active sites for oxygen reduction reaction (ORR). To date, ORR-active sites either in the oxide or oxynitride catalysts have been acknowledged as anion defects.3,4 The charge neutrality of the defect-incorporated oxides is compensated by a decrease in the valence of the metal, which results in dissolution as the oxides are stable in acid media when the valence of either group 4 or 5 metals is the highest.5 The substitution of oxygen by an anion with larger valence (below 2–) such as nitrogen and metal by a cation with lower valence (below 4+ and 5+ for group 4 and 5 metals, respectively) are the possible routes to incorporate oxygen defects into oxides without decreasing the valence of either group 4 or 5 metal. The first route has been investigated by several groups, whereas the second one has not been reported so far for either group 4 or 5 metal oxide catalysts. In this study, we report the synthesis of aluminum-doped hafnium oxynitride catalysts supported on carbon black (Hf1-δAlδOxNy-C) and its ORR activity.

Hf1-δAlδOx-C catalysts were synthesized using a previously reported impregnation method for obtaining HfOx-C (denoted as IM-Cl23) with the modification of addition of powdered AlCl3·6H2O precursor into a dispersion.6 The δ was varied over the range of 0.03–0.3. Only Hf0.8Al0.2Ox-C catalysts which showed the maximum activity were doped with nitrogen by heating them at 1273 K for 6 h under flowing ammonia gas to obtain Hf0.8Al0.2OxNy-C. The catalyst morphologies, crystal structures, and surface chemical states were evaluated using field-emission transmission electron microscopy (FE-TEM), X-ray diffraction (XRD), and X-ray photoelectron spectroscopy (XPS). The ORR activities were evaluated by measuring rotating disk electrode (RDE) voltammograms in 0.1 mol dm–3 H2SO4 solution.

Figure 1 shows a FE-TEM image of Hf0.8Al0.2OxNy-C. The energy dispersive X-ray (EDX) spectra (not shown) revealed that the black particles contained both Hf and Al atoms whereas grey area contained only C atoms. The Hf0.8Al0.2OxNy particles’ size shown in Figure 1 were nanometer-order; however, it is noted that some particles aggregated into ~15 nm. All the Hf1-δAlδOxNy-C catalysts were synthesized using the impregnation method previously reported for the synthesis of Al-free HfOxNy-C catalysts in which the HfOxNy particle size was about a few nanometers,4 lower than that of Hf0.8Al0.2OxNy. The experimental differences between the previous4 and current studies are the ammonia-treatment conditions and presence of Al precursor. Because the former did not affect the particle size,2 the latter could be the source of size enhancement. XRD and XPS analyses confirmed that the trivalent-Al atoms were successfully doped into tetravalent-Hf sites in HfOx-C without lowering the Hf-valence, thereby yielding the cubic-HfO2 phase with oxygen defects. Both the content of the cubic phase and ORR activity showed a volcano type dependence on δ, with an optimum value of 0.2. Nonetheless, the N-doping into O-sites enhanced the activity further. The durability of Hf0.8Al0.2OxNy-C catalyst was investigated using an accelerated degradation protocol recommended by the U.S. Department of Energy.7 It showed high durability: a decay of only 50 mV at 1 mA cm–2 after the 20,000th potential cycling without significant changes in the chemical bonding states on their surfaces confirmed by XPS spectra obtained after the accelerated degradation tests. 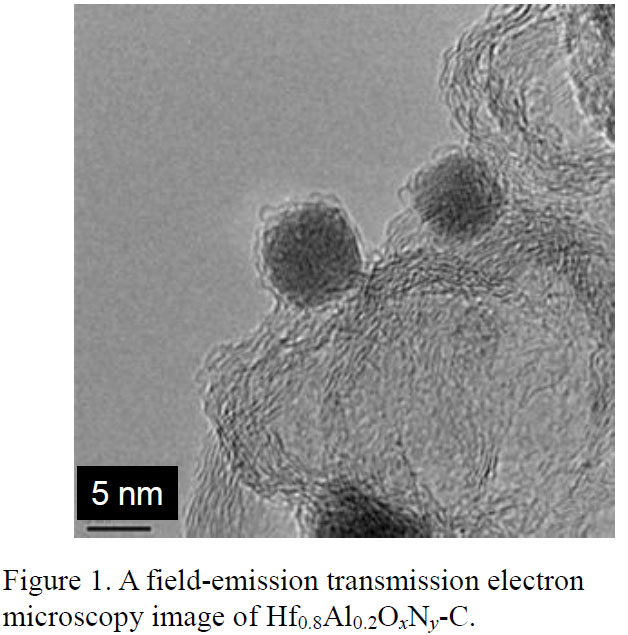