Development of non-noble metal cathode is required to commercialize polymer electrolyte fuel cells. We focused on group 4 and 5 transition metal oxide-based cathodes, because of their high chemical stability in acidic media (1,2). We have investigated the possibility of the oxide-based cathodes from two viewpoints such as activity and durability.

Regarding the enhancement of oxygen reduction reaction (ORR) activity, we used carbon materials such as deposited carbon derived from starting materials and multi-walled carbon nanotube (MWCNT) to obtain sufficient electrical conductivity. We prepared the oxide-based cathodes with high ORR activity by heat treatment of organic complexes such as oxy-metal phthalocyanine or oxy-metal tetrapyrazino porphyrazine under low oxygen partial pressure. Nano-sized oxide-based compounds were successfully obtained to have high ORR activity.

On the other hand, regarding the durability, we prepared the oxide-based compounds without carbon to examine the durability at high potential region.

In this paper, we introduce the status of development of the oxide-based cathodes from these two viewpoints.

For the ORR activity, oxy-titanium tetrapyrazino porphyrazine (TiOTPPz) and oxy-titanium phthalocyanine (TiOPc) were used as different starting materials. Multi-walled carbon nanotube (MWCNT) was used as catalyst support. TiOTPPz or TiOPc and MWCNT were conducted ball-mills in dry process. The powder was heat-treated for 0.5~10 h at 900oC under N2 containing 2% H2 + 0.05% O2 to prepare oxide-based catalyst powder. Ti-CNO(TPPz) and Ti-CNO(Pc) were designated oxide-based compounds made from TiOTPPz and TiOPc, respectively.

For the durability, TiO2 and Nb2O5 were mixed to conduct dry ball-milling to prepare all oxide-based cathodes. The obtained powder was heat-treated at 1050oC for 40 h under 4% H2 to obtain reduced complex oxide (TixNbyOz) on Ti4O7.

All electrochemical measurements were performed in 0.1 mol dm-3 H2SO4 at 30oC with a 3-electrode cell. Slow scan voltammetry was performed at a scan rate of 5 mV s-1 from 0.2 to 1.2 V under O2 and N2 atmosphere. A current density was based on the amount of catalyst powder. Triangular potential cycling between 1.0 and 1.5 V vs. RHE with a scan rate of 0.5 Vs-1 was used as degradation test. During degradation test, the SSV was performed, and the durability was evaluated by degradation rate of ORR current at 0.7 V.

Figure 2 shows the degradation rate of the Ti4O7+TixNbyOz and the Zr-CNO(Pc)/MWCNT (zirconium oxide-based compounds prepared by heat treatment of oxy-zirconium phthalocyanines under low oxygen pressure with MWCNT as support) during triangular potential cycling between 1.0 and 1.5 V vs. RHE. The Zr-CNO(Pc)/MWCNT violently deteriorated. On the other hand, Ti4O7+TixNbyOz maintained ORR activity during degradation test. The durability of Ti4O7+TixNbyOz was much higher than that of Zr-CNO/MWCNT in high potential region. 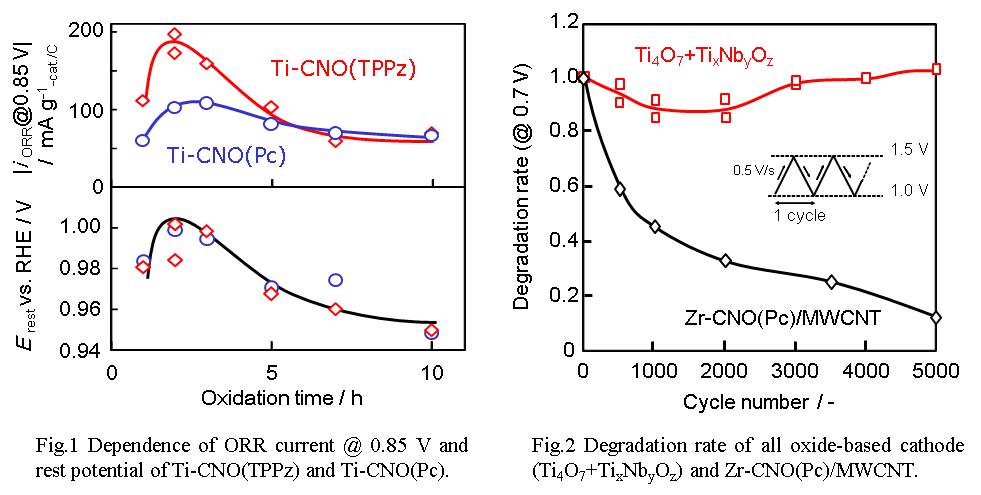