Expo Center, 1st Floor, Universal 18 (Moon Palace Resort)
T. Watanabe, R. Kuriyama, M. Hashiguchi, R. Takahashi, K. Shimura (Waseda University), A. Ogura (Meiji University), and S. Satoh (University of Hyogo)
Implementation of high-k/metal gate stack poses a challenge in controlling the threshold voltage (VTH) of MOSFET devices. Recent studies have shown that an electric dipole layer formed at high-k/SiO2 interface is responsible for anomalous VTH shifts. The origin of the dipole layer has been explained by several mechanisms, such as the areal density difference of O atoms [1], electronegativity difference [2], and contact induced gap state [3]. Among these models, the first model proposed by Kita and Toriumi [1] is noteworthy because of its simplicity and potential to be applicable to wide variety of high-k materials. The model states that the interface dipole is formed by the movement of negatively charged O ions from higher oxygen-density side to a lower one.

Recently, we performed molecular dynamics (MD) simulations of high-k/SiO2 interfaces and succeeded in reproducing the O atom migration across the Al2O3/SiO2 interface [4]. The O ion moves one-sidedly from Al2O3 side to SiO2 one, but opposite movement never occurs. The simulation result implies that the O ion migration is induced by some drift forces, but not by a simple diffusion due to the O density gradient across the high-k/SiO2. In this paper, we discuss the driving force of the O ion migration across the high-k/SiO2 in terms of the multipole moment around oxide cation.

The MD simulation was performed by a commercial simulation package SCIGRESS ME from Fujitsu Ltd. Al2O3/SiO2 interface model was constructed by sandwiching amorphous Al2O3 blocks in between amorphous SiO2 blocks as shown in Fig.1. The hetero-oxide structure was annealed by the isothermal-isobaric MD calculation for 100 ps, thermostated at 1000 K by a velocity scaling with keeping the pressure at atmospheric pressure. The Born-Mayer-Huggins potential is employed in the MD simulation.

Figure 2(a) shows a charge density profile across the SiO2/Al2O3 interface. Electric dipole layer appears at the interface, and it is directed from the SiO2 side to Al2O3 side. Figure 2(b) shows the electric potential profile around the interface, which is obtained by solving one-dimensional Poisson’s equation. The built-in potential at SiO2/Al2O3 interface is about 0.5 V, which matches the experimental value of the flat-band voltage shift [1]. Thus the direction and magnitude of the dipole moment in our model agrees with the experimental result. Figure 3 shows the magnified image of the SiO2/Al2O3 interface, in which the O ions originated from Al2O3 are colored by green. It can be clearly seen that the O ion moves one-sidedly from Al2O3 side to SiO2 one.

The simulation result indicates that the O ion is driven by some drift forces, but not by a simple diffusion due to the density difference at the interface. It is inferred that the O ions in Al2O3 are attracted to the strong positive charges of Si ions. The positive charges of Si ions must be canceled by the negative charges of O ions in SiO2, but at very close distance, there is an appreciable octupole moment around the Si ion which is located at the center of SiO4 tetrahedron (see Fig.4). On the other hand, there is an hexadecapole moment around the Al ion which located at the center of AlO6octahedron. The electrostatic field induced by the octupole moment around the Si ion is stronger than that of the hexadecapole moment around the Al ion, and thus O ions in the vicinity of the interface can be attracted to Si ions in specific directions. Opposite dipole formation at SiO2/Y2O3interface can also be explained by the difference in the multipole moments around Si and Y ions [4].

This work is supported by JST-CREST, and a Grant-in-Aid for Scientific Research (B) from the MEXT Japan. 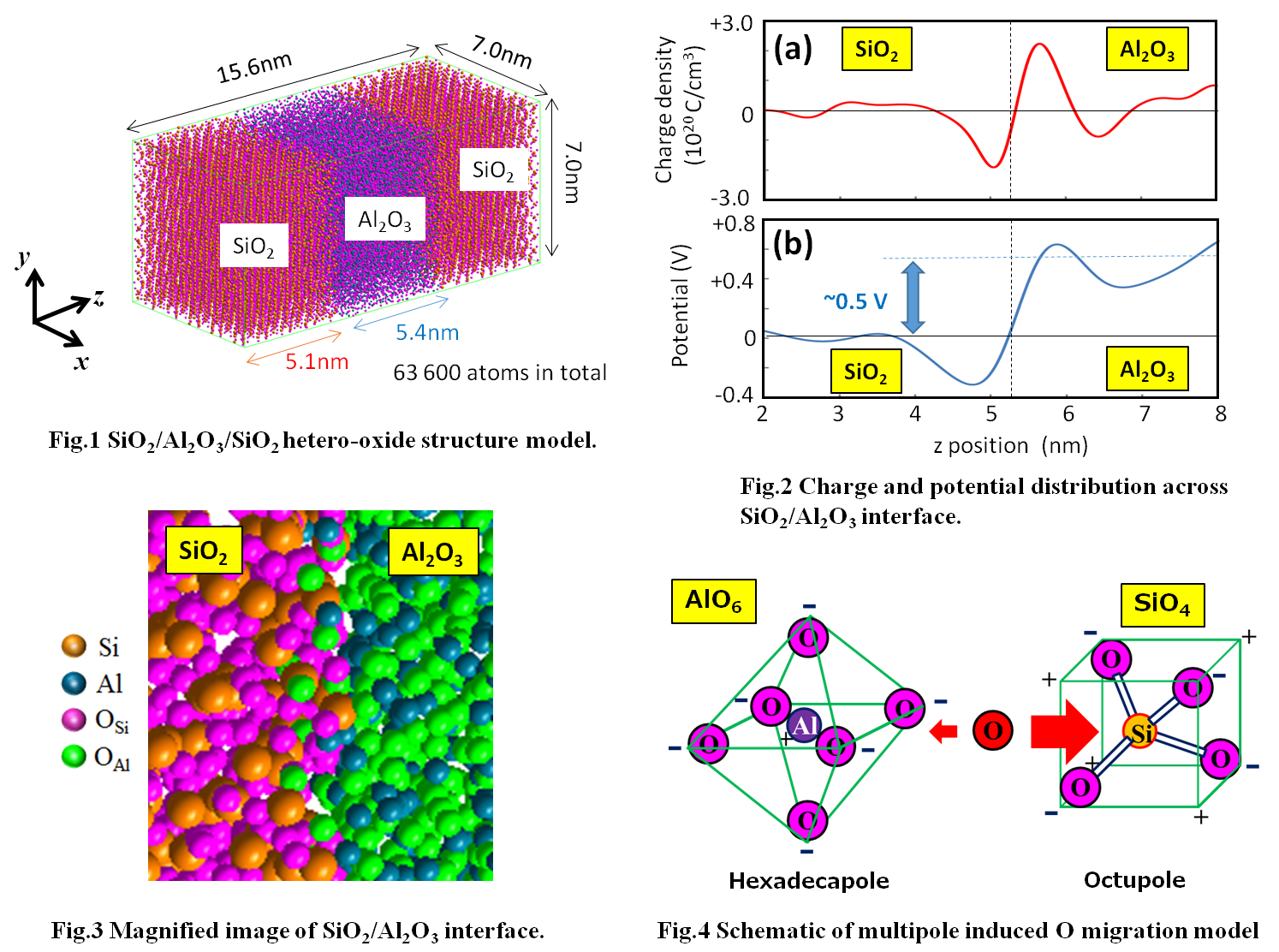