Expo Center, 1st Floor, Center and Right Foyers (Moon Palace Resort)
E. A. Baranova (University of Ottawa) and O. Kuznetsov (Dniprodzerzhins’k State Technical University)
Transition elements of d-group (Fe, Co, Ni) and f-group (Gd, Tb, Dy, Ho, Er, Tm), which are ferromagnetic elements, show a spontaneous magnetization. Under their anodic dissolution the magnetization of domains changes. The immitance of the simple model of the anodic dissolution of polycrystalline ferromagnetic materials in a constant magnetic field is presented. Moreover, the expressions describing the impedance and admittance of this model are developed.

When alternating current flows through a ferromagnetic material with a magnetization different from zero, there must be appearance of Emf of electromagnetic self-induction E [1]:

where Ψ is magnetic flux-linkage and t is time.

The magnetic flux-linkage can be determined from the following equation [2]:

The integration is carried out over the whole volume of the ferromagnetic material v.

From equation (2) it can be seen that in constant external magnetic field, H = const, the magnetic flux-linkage is a function of current and magnetization only:

Then in the linear approximation, for the complete differential  Ψ, we obtain:

After substituting expression (4) to equation (1) we get:

By definition,(∂Ψ/∂I)M is nothing else but inductance of ferromagnetic L[1]:

where MB = eh/(4πme) is Bohr magneton [1];
kMB is magnetic moment of the atom, which consists of k number of Bohr magnetons;
NA is Avogadro number
n is mole number.

Material balance of metal ions in the vicinity of the electrode layer is:

where F is a Faraday constant.
z is a number of electrons during the ionization of ferromagnetic atom.
Taking into account the expressions (6), (7) and (8), the equation (5) takes the form:

When the system is perturbed by an harmonic current of small amplitude, one can use the Laplace transform, and then equation (9) in phasor variables [3] can be written as:

Thus, for the immittance of the considered model of anodic dissolution of ferromagnetic materials the following expressions are obtained:
For the impedance:

An electrical equivalent to the expressions (11) and (12) is a series connection of an inductance, L and an active resistance, R = a (Figure1).

In the present work the immittance of the simple model of the anodic dissolution of polycrystalline ferromagnetic materials in a constant magnetic field is developed. The ferromagnetic materials that include transition elements of d (Fe, Co, Ni) and f(Gd, Tb, Dy, Ho, Er, Tm) groups show spontaneous magnetization. The expressions for the impedance and admittance of this model are obtained. The electrical equivalent of the impedance model is a series connection of inductance and active resistance. 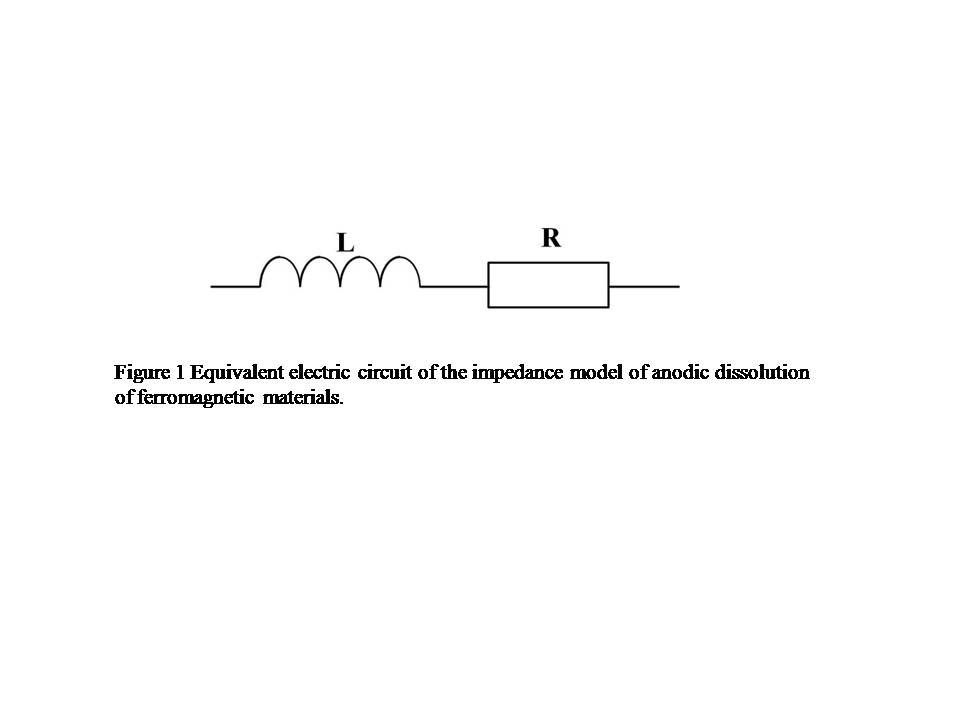