Expo Center, 1st Floor, Center and Right Foyers (Moon Palace Resort)
N. De Almeida and G. Goward (McMaster University)
Proton exchange membranes fuel cells (PEMFCs) are excellent energy carriers for numerous applications such as automobiles.  Current standard operating conditions (<80°C) of PEMFCs are unfortunately optimized in a way that leads to catalyst poisoning by carbon monoxide.  Higher operating temperatures (>120°C) are desirable, and can be achieved with alternative materials that conduct protons anhydrously via a Grotthuss mechanism.  Alternative materials for an electrolyte would be ionic salts such as solid acids.  Solid acids are chemically, thermally and electrochemically stable and conduct protons under anhydrous conditions. 1-3  Previous solid acids studied contained phosphate functional groups where it was shown that these systems have good conductivity in anhydrous conditions.4  Such phosphates possess substantial proton conductivity; however high temperatures can promote an irreversible condensation into pyrophosphates, which lowers conductivity.  In this study sulfonate-based solid acids are used.  Heterocycles such as imidazole are paired with acids such as trifluoromethanesulfonic acid to produce acidic salts, e.g. imidazolium trifluoromethane sulfonate (IFMS).  These conductive salts cannot be placed into a fuel cell since they do not have the capability to form thin films therefore, a polymer support must be used.  Previous investigations focused on non-ionic polymers, such as Teflon,, where decent proton conductivity was obtained.5  The polymer support chosen here is sulfonated polyetheretherketone (sPEEK), a well-known proton-conducting polymer, which offers a host architecture for cooperative proton transport.  By itself sPEEK requires a high degree of sulfonation to be ionically conductive; however it is known to swell excessively in water at high degrees of sulfonation.6  Preliminary proton conductivity measurements at 120°C and 0% RH show 4.4x10-4 to 5.9x10-3 S/cm with degrees of salt loading between 32-50 percent, as determined by thermal gravimetric analysis.  Initial ion exchange capacity (IEC) studies showed that sPEEK itself possesses 2.1±0.2 mmol/g of available sulfonate groups with the loading of 32% IFMS the IEC increased to 3.8±0.2 mmol/g.  With the addition of the salt, there is a proportional increase the number of available sulfonate groups that can contribute to proton conductivity.

Solid state nuclear magnetic resonance (NMR) methods can investigate dynamics on a localized scale to probe mobility of proton sites.  Methods include 1H magic angle spinning (MAS) NMR and 2H static NMR studies, which reveal details of timescale and geometry of exchange processes.  Deuterium solid state NMR is a good probe of dynamic processes in the solid state, as the characteristic static lineshapes are highly sensitive to the dynamic processes such as molecular reorientations, and can be accurately modeled to extract rates of chemical exchange.2  These measurements will compare dynamics and conductivity in the salts themselves, sPEEK and the salt-sPEEK composites.  Figure 1 depicts IFMS at 300 K and 350 K. When the temperature is increased the line shape narrows and additional features are observed.  These features correspond to an increased jump rate from the ring flip within the salt.  Jump rates can be fitted to extract activation energies of the ring flip. 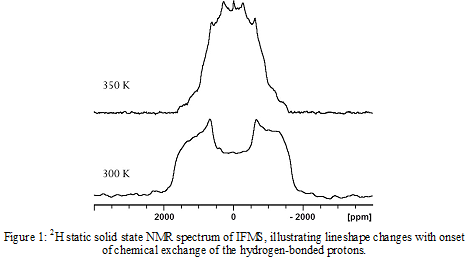