Proton exchange membrane fuel cells (PEMFCs) are promising alternative devices for electrochemical energy transformers. In the PEMFCs, electrolyte materials are one of the key components. So far, perfluorinated sulfonic acid (PFSA) membranes, such as Nafion®(DuPont), have been used as the electrolyte membrane in the PEMFCs. Recently, sulfonated polyetheretherketone copolymers (SPEEK, Fig. 1) have been synthesized as low-cost and high-temperature-resistant alternative polymer electrolyte membranes [1], and the SPEEK copolymers exhibited high proton conductivity and excellent thermal stability.

Oxygen gas permeability is an important property for the electrolyte. For example, it is widely recognized that oxygen gas crossover from the cathode to the anode through the electrolyte membrane leads to membrane degradation [2, 3]. In contrast, high oxygen gas permeability is required for ionomer which is added in the catalyst layer and cover Pt NP catalysts, influencing the PEMFCs performance. In this study, oxygen transport across the SPEEK thin film electrolyte was investigated. We used a Pt microelectrode (ME) covered with recast SPEEK thin film electrolyte. Oxygen diffusion and oxygen dissolution rates were determined from the limiting currents across the films of different thicknesses. The rate dependence on temperature was investigated to understand the mechanism for the gas transport across the SPEEK thin film electrolyte.

Pt ME (100 μmφ) working electrode (W.E.) and Pt ME (250 μmφ) counter electrode (C.E.) were sealed in a glass rod (8 mmφ). A dynamic hydrogen electrode (DHE) consisting of two Pt MEs (250 μmφ) was used as a reference electrode (Fig. 2). SPEEK was dissolved in N,N-dimethyl-formamide (DMF) and casted onto the glass rod surface, followed by heat treatment at 120°C for 3 h in air. The resultant rod was soaked in 0.5 M H2SO4at room temperature for 24 h and repeatedly washed by DI water. The thickness of the SPEEK thin film electrolyte formed on the Pt ME W.E. was measured by contacting surface profile meter.

The rod was set up in a solid-state electrochemical cell placed in temperature-humidity-controllable chamber. Cyclic voltammograms (CVs) were measured in the chamber under atmospheric pressure. Oxygen transport parameters, DCeq/d and kCeq, were determined from the limiting current (Ilim) for oxygen reduction reaction (ORR) on the Pt ME W.E. using eq. (1) [3], where F is the Faraday constant (96485 C/mol), kCeq is the oxygen dissolution rate (mol/cm2/s), d is the thickness (cm) and DCeq is the oxygen permeability (mol/cm/s), respectively. 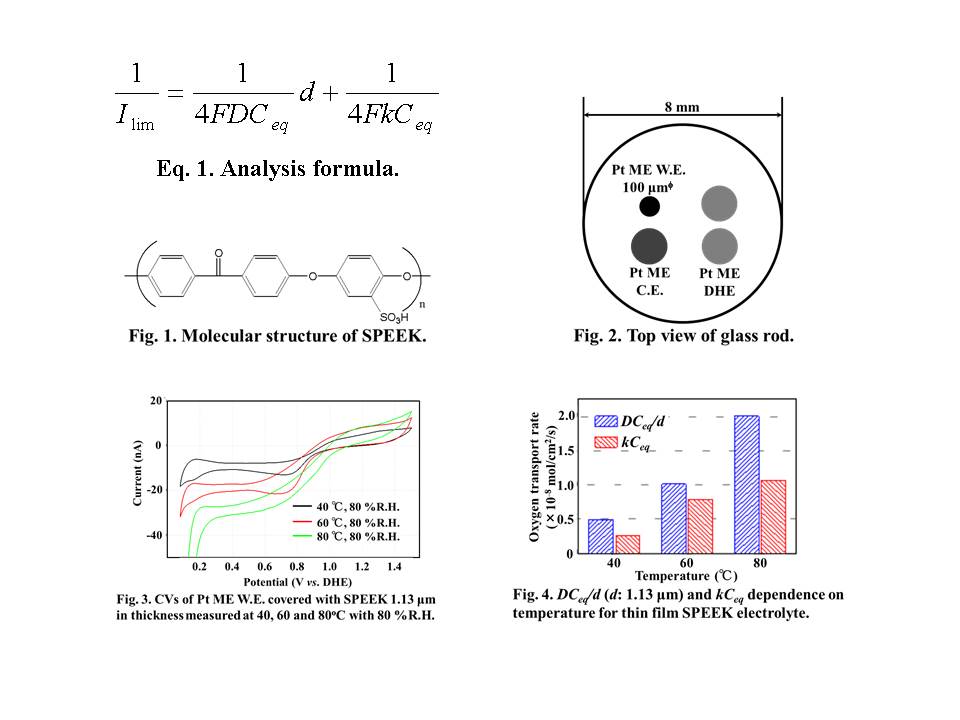