Lithium ion batteries (LIBs) are rechargeable batteries widely used in portable devices such as laptops, mobile phones and other electronic devices.  Owing to their success and promising properties, LIBs are now being considered for storage and distribution of renewable energy sources, and in the automotive industry, for powering hybrid and plug-in vehicles.  The increasing demands on batteries has stimulated the development of advanced materials, diagnostic tools and battery models that could lead to better performance in terms of storage capacity, kinetics, and long-term cyclability.

A real-time quantification of Li transport using a non-destructive neutron method to measure the Li distribution upon charge and discharge of a Li-ion cell is reported here.  In situ Neutron Depth Profiling (NDP) provides temporal and spatial measurement of Li and visualization of its transposition to guide materials development for efficient storage.  Using in situNDP, we probed the onset of lithiation in a model Sn electrode and visualized the enrichment of Li atoms on the surface while monitoring the propagation of Li into the bulk.

Energy density requirements for larger-scale applications would require higher storage capacity from both anodes and cathodes.  Current graphite anode material in Li-ion batteries offers numerous advantages including good cycle life and relatively low cost.  Increasing the storage capacity anodes require higher capacity materials.  Sn, with its relatively high theoretical specific capacity of 959 mAh/g is a promising alternative anode material among other group IV elements.  These intermetallic forming materials experiences volumetric expansions of ~300% upon charge, resulting in drastic capacity fade with time.  Improvements in the complex architectures such as nanowires, 3D architecture, inactive core/active shell structures are often attributed to enhanced accommodation of the transformations that occur during cycling.  However, the transport properties of lithium and their resulting distribution within the material are largely inferred using ex situand often invasive techniques.

This paper will discuss recent efforts in using neutron depth profiling (NDP) to probe the distribution and dynamics of Li transport in Sn anodes during lithiation and delithiation processes.

Half-cells with Sn foil as the working electrode (0.0125 mm thick, 97.4%, Goodfellow) in disk geometry (12 mm in diameter), metallic lithium (Chemetall Foote Corp) disc (12 mm in diameter) as a combined counter and reference electrode, a Celgard® separator (~ 25 mm), and electrolyte (1 M LiBF4 in 1:1 ethylene carbonate: dimethyl carbonate from Sigma Aldrich) were assembled in a modified CR2032 coin cells (MTI Corp) as depicted in Figure 1.  Coin cell components were cleaned in acetone (≥ 99.5%) and methanol (≥ 99.8%) in sequence followed by overnight drying at 55 oC under vacuum.  The coin cells were crimped using a manual hydraulic crimping machine (MSK-110, MTI Corp) equipped with a CR2032 die at pressures of 1100 – 1200 psi.  The coin cells were modified with a 9.5 mm diameter hole on one of the casings to allow the placement of a Kapton® film (7.5 mm thickness) adhered to the casing via Kapton® tape (Bertech). The design of a “leak” free electrochemical cell is critical to the success of the experiment.  The electrochemical cell remains functional and air free for weeks and remains “leak” free under vacuum (10-6 torr) for days.  The handling and assembling of materials were performed in an Argon-filled glovebox (mBraun) with continuous detection of H2O  < 0.5 ppm and O2< 0.5 ppm.  After assembly, the coin cells were transported in a sealed, argon-filled desiccator.  Electrochemical measurements were performed on a Gamry Potentiostat (Reference 600, Gamry Instruments).  The mass of the electroactive Sn electrode was determined by weighing.

While the data presented in this paper was obtained using a “cold” neutron depth profiling ( NDP) facility at the National Institute of Standards and Technology’s (NIST) Center for Neutron Research (NCNR) (Gaithersburg, MD, USA), the preliminary testing and the optimization of the in situ electrochemical design were initially performed at the Ohio State University Research Reactor (OSURR) with a thermal equivalent fluence rate of 8.6 × 106 cm-2s-1 and a maximum beam diameter of 30 mm. The facility at NIST provides a well-collimated “cold” neutron (~5 meV) with thermal equivalent fluence rate of 1.0 × 109 cm-2s-1 and a nominal beam area of 110 mm2. 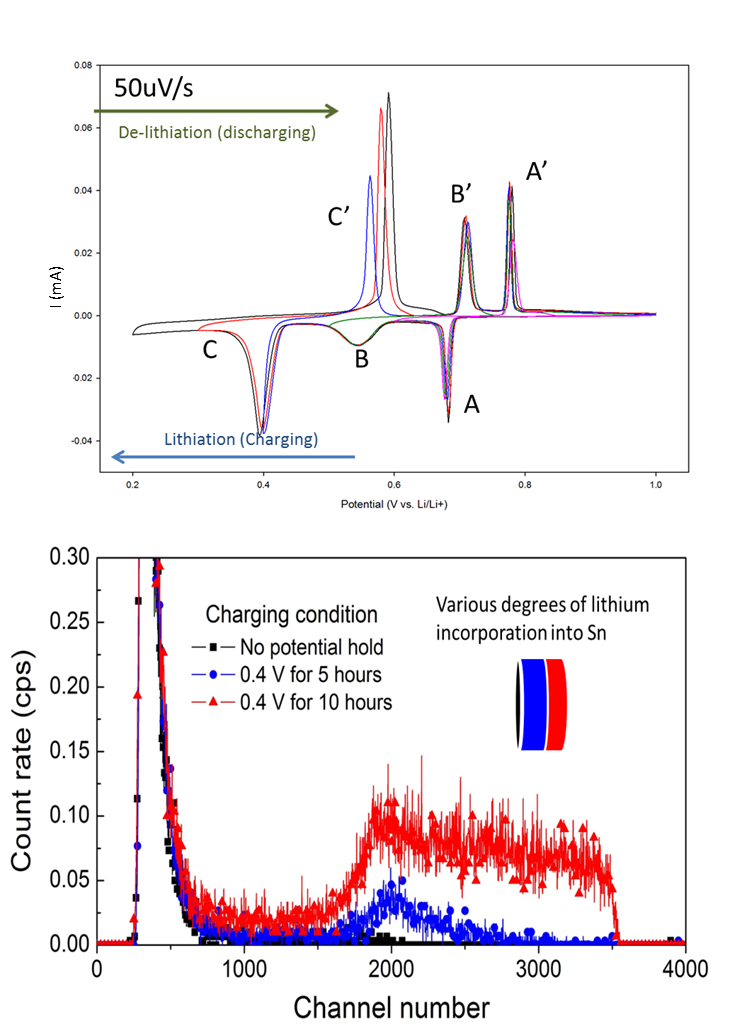