40
Kinetic Studies on State of the Art Solid Oxide Cells

The Solid Oxide Fuel Cell (SOFC), which converts hydrogen as well as hydrocarbon fuels directly into electricity, has demonstrated almost comparable performance when operated reversely as Solid Oxide Electrolyser Cell (SOEC) for electrical energy storage as fuels. In both applications of the technology, cell optimization and eventual commercialisation requires a sound understanding of the mechanisms that affect performance and stability. These mechanisms depend on operation conditions like temperature, gas composition, fuel utilisation and current load as well as on gradients along cell and stackand cell microstructure. This increases the complexity of the systems, such that deconvolution and analytical description of the involved mechanisms becomes a major challenge, especially if both macroscopic trends as well as fundamental chemistry are to be accommodated. The electrode reaction kinetics is one such mechanism.

The cells were characterised through electrochemical impedance spectroscopy at open circuit voltage and under current load. Current/voltage characteristics were recorded at different temperatures and gas compositions. The fuel utilization and current density range were chosen to emulate practical conditions.

Figure 1 displays the Distribution of Relaxation Times (DRT)1 of spectra recorded at varying current densities in SOFC mode at 700- and at 800oC ensuring a maximum fuel utilization of 60% in three different fuel electrode gas mixtures. Considering that the area beneath a peak represents the Area Specific Resistance (ASR) of the given dynamic process, it is clear that depending on operation temperature and fuel composition the processes make varying contributions to the overall cell resistance.

The ASRs of the processes were obtained through Complex Non-linear Least Squares fit of the spectra with an equivalent circuit model2. The DRT was used for pre-identification of initial fit parameters.

By integration of the ASRs vs current density, the corresponding overpotential curves were obtained, as displayed in Figure 2 for the electrochemical oxidation of H2 at the Ni/YSZ electrode. (f > 103Hz in Figure 1)

Figure 2 reveals that the overpotential associated with the electrochemical oxidation of H22 (and CO) at the Ni/YSZ electrode at all current densities increases from H2/H2O to H2/CO2 and CH4/H2/H2O fuel compositions. This is probably because in the reformate cases, H2 has to be replenished through the water gas shift reaction2 and also at equilibrium the H2/H2O case contains more H2O. The cooling effect of the endothermic steam reforming may contribute to a higher overpotential in CH4/H2/H2O mixture. Relative to the overall potential drop in the investigated current density range, it can be claimed though that under these conditions and within the limits of accuracy, the Ni/YSZ electrode displays comparable performance in the three different fuel gas compositions.

In this work experimental results of investigations on cells with varying microstructure of the fuel electrode operated in H2/H2O and reformate mixtures will be presented. Detailed impedance analysis will be used to determine the current/overpotential relationships and corresponding partial pressure dependencies. This will provide a solid basis for discussion of the highly debated analytical description of the electrochemical reaction overpotential of the Ni/YSZ electrodes. 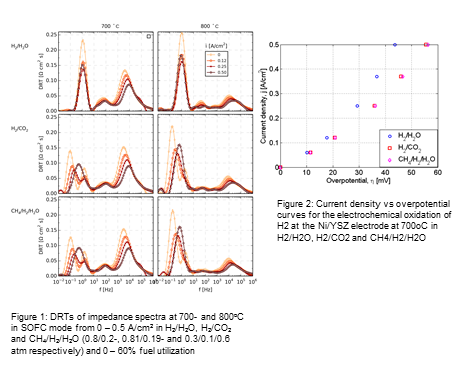