Sunrise, 2nd Floor, Galactic Ballroom 4 (Moon Palace Resort)
S. W. Donne, J. A. Allen, and M. Glenn (University of Newcastle)
Coal is an important natural resource for the Australian economy and continues to be used worldwide despite growing concerns over the effect of carbon pollution. In order to reduce current consumption and emission trends, alternative low carbon and renewable technologies are required.

The direct carbon fuel cell (DCFC) is a possibly transformative technology under development which is able to generate electrical energy directly from carbon based fuels, including both coal and biomass. The DCFC can theoretically transform 100% of the chemical energy bound in the carbon fuel fed to the DCFC to electrical energy, although parasitic reactions such as Boudouard corrosion [1] can act to reduce this.

Coal has been suggested as an ideal candidate for the DCFC due to its high fixed carbon content. Coal also consists of a volatile component however, which is unstable under DCFC operating conditions (in excess of 500°C) and will evolve gaseous products including methane, hydrogen and carbon monoxide as the coal thermally degrades. Coal used in the DCFC must therefore be pre-treated to remove the volatile content and allow production of a pure CO2 flue. The loss of the volatile material constitutes a reduction in the efficiency of the coal conversion process as approximately 20% of the coal HHV (dependent on specific coal rank and properties) is not transferred to the DCFC for direct conversion to electrical energy [1]. Coal of different rank and origin will vary in terms of volatile composition and will therefore have varying yield following pyrolysis. Maximizing char production is key for overall process efficiency and therefore coal types with low volatile content could well be favored over low volatile content coal. The ash character will also vary, however, and this, along with differences in chemical structure and fixed carbon composition/functionalization, could lead to different electrochemical behavior in a DCFC arrangement.

In this work, several coals of varying origin have been compared for electrochemical activity in a DCFC half-cell arrangement. Coal was pre-treated initially under identical pyrolysis conditions and thermogravimetric behavior examined in detail for each coal using TGA/DTA. The most active coal was then examined in the DCFC following different pyrolysis conditions, including heating rate and HHT, in order to examine the effect of this pre-treatment on the final electrochemical activity.

Electrode investigations for coal pyrolysed at 700°C were made using an anode pellet consisting of 25wt% pyrolysed coal with SFG(44) graphite making up the remainder. Graphite is far less electrochemically active than coal and behavior observed is therefore predominantly that of the coal present in the anode pellet. The pellet was then inserted into an alumina tube and examined using the electrochemical arrangement shown in Figure 1. This cell arrangement allows investigation of the electrode kinetics at the carbon surface without limitation by mass transport issues which predominate in slurry based cells. Each electrode was subjected to an identical electrochemical procedure which involved measurement of the system open circuit potential as well as linear sweep voltammetry at different sweep rates and chronoamperometric measurements to compare stability of the current density under a held potential.

Results vary for the seven coal types examined as shown in Figure 2. Interesting electrochemical response is observed for highly active coals where an apparent inhibition/activation process is observed – possibly as a result of carbon dioxide gas evolution and blocking of active surface sites. This is most clearly seen in potential holding experiments (Figure 2) and the passive/active pattern observed closely resembles electrochemical corrosion seen commonly in systems like the corrosion of iron in acidic systems [2]. 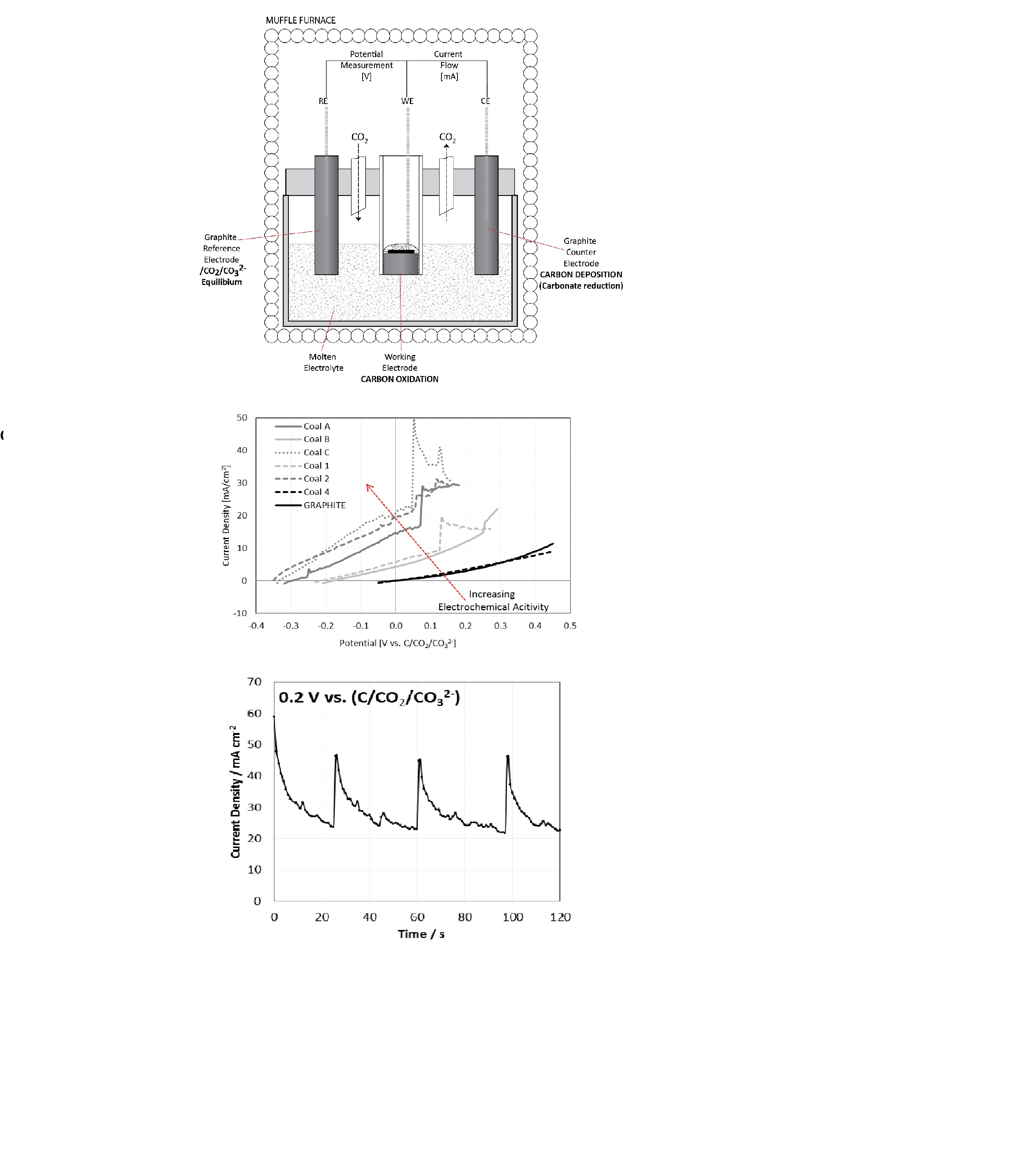