Positive electrode material, Li(Ni,Co)O2 system, of Li-ion battery has been attractive because it has the advantage in low environmental load due to low Co content. There are many previous works about the Li(Ni,Co)O2 and the aluminum-substituted one because of high heat stability. However, detail structural changes during electrochemical processes are still ambiguous for site occupancy, local structures, and electronic structures even though these would play important roles on the battery characteristics. In this research, we used several quantum beam techniques to reveal the crystal structures, electronic and nuclear densities, and local structures of LiNi0.8Co0.2O2 during charge process.

To synthesize the LiNi0.8Co0.2O2, the precursor was prepared by co-precipitation method. The co-precipitated material was annealed at 800 °C in air for 15 h. The product was identified by powder XRD and ICP-OES. To study change of crystal and electronic structure of this cathode material during electrochemical process, cathode materials were prepared by four charge depths, and were investigated using the synchrotron X-ray diffraction (BL02B2, SPring-8) and neutron diffraction (BL20, J-PARC). The data was analyzed with the Rietveld technique using Rietan-FP and Z-Rietveld, and by the MEM using the Dysnomia and Z-MEM programs. To examine the local structures, X-ray absorption spectroscopy (BL14B2, SPring-8) and X-ray total scattering (BL04B2, SPring-8) were measured.

The neutron diffraction patterns were measured for the cathode after 2nd discharge process as well as the pristine electrode. It was demonstrated that the crystal structure analysis by ex-situ measurement could be successfully performed even for the electrode with an amount of about 10 mg. The values of 3b-6c bond length decreased and λ2, which expresses the distorted degree of the Li-O6 and M-O6 octahedra, were increased with increasing charge depth. Synchrotron-based experiments using high energy X-ray total scattering and pair distribution function (PDF) analysis (Fig. 1) indicated that the oxygens arranged to crystallographic a-b plane were disturbed in the charge state of 4.3 V after 2nd cycle (Fig. 2).

This research was supported by the RISING-project of the New Energy and Industrial Technology Development Organization (NEDO), Japan. 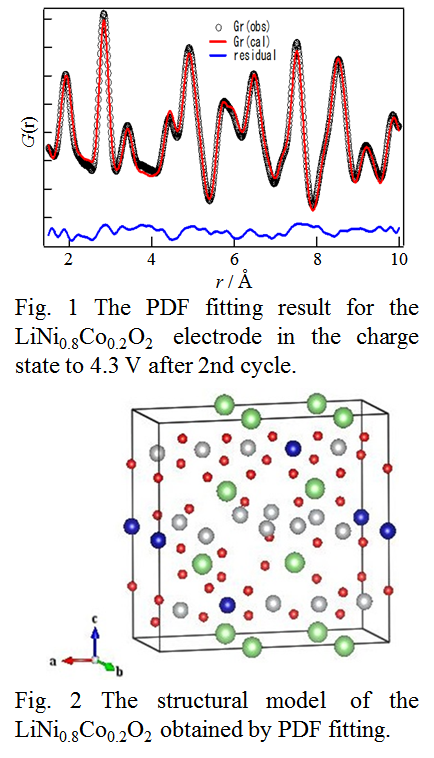