Expo Center, 1st Floor, Center and Right Foyers (Moon Palace Resort)
I. Laresgoiti, S. Käbitz, M. Ecker, and D. U. Sauer (Chair for Electrochemical Energy Conversion and Storage Systems, Institute for Power Electronics and Electrical Drives (ISEA), RWTH Aachen University, Jaegerstrasse 17-19, 52066 Aachen, Germany, Juelich Aachen Research Alliance, JARA-Energy, Germany)
Understanding the ageing phenomena in the Li-ion batteries is of great importance nowadays for their successful commercialization. Li-ion degradation under storage conditions has been widely studied and the causes are well established. However, ageing during cycling remains still unsolved nowadays. Mechanical degradation is recognized as the main ageing mechanism of the battery due to volume changes of the electrodes during the cycling process. So far, many investigations have been published where the stresses on single particles have been analyzed [1]. Others, in more recent publications, have modelled the propagation of the fracture surface and combined it with the chemical degradation in order to explain the break and repair effect [2] and the electrical isolation of the active material [3].

In this research, S-N curve fatigue approach has been followed to describe the fracture of the active material. By means of this method, gradual decrease of the particle size has been reproduced. Furthermore, a parametric analysis has been carried in order to clarify the role of the stress factors (i.e. DOD, Crate, SOCmean, etc…) as well as the design parameters on the cycling ageing mechanisms.

The mechanical degradation model has been integrated in a one dimensional physicochemical model of a Li-ion battery [4], all implemented in Matlab/Simulink®. Figure 1 shows the scheme of the mechanical model.

The stresses are calculated based on the diffusion induced stress phenomenon (DIS) [1]. Due to the cyclic nature of the stress profile, during the cycling of the battery, a fatigue approach is employed to predict the fracture of the active material. The stress profile is first processed using a rain flow cycle counting method. Subsequently, a probabilistic S-N curve [5] is applied, which describes the relationship between the stress and the number of cycles to failure. Finally, damage accumulation is computed using Palmgren-Miners’ rule [5] to estimate the fracture of the active material particle.

The model shows that most of the mechanical degradation takes place in the first cycles, later the effect becomes smaller and smaller, a fact that has been verified experimentally by other authors [6]. Using the simulation model, this behavior has been identified to be due to the initial larger particle size which produces larger stresses. As particle size decreases due to particle fracture the induced stress decreases (see Figure 2).

This work is an attempt to qualitatively study the mechanical degradation and its effect on the performance degradation of Li-ion batteries.

Figure 2: The stresses in the graphite in the area close to the separator versus cycle number. The evolution of the particle size is shown in the graph. Smaller particles produce smaller stresses.

The project upon which this publication is based is funded by the Impuls- und Vernetzungsfond der Helmholtz-Gemeinschaft e.V. through the framework of the research initiative HGF Energie Allianz. 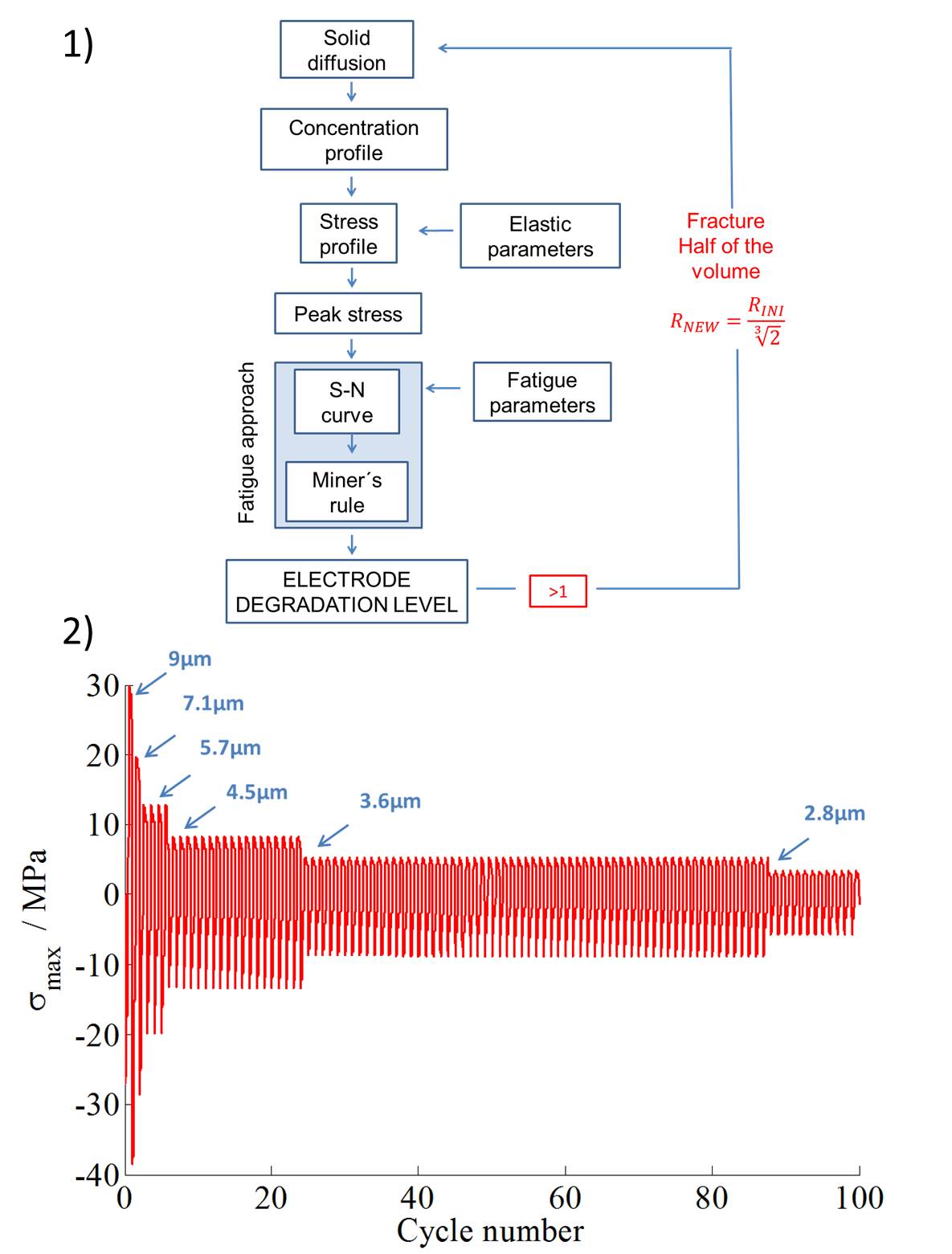