Expo Center, 1st Floor, Center and Right Foyers (Moon Palace Resort)
Y. Si, Z. Xiong, and M. Li (College of Chemistry and Pharmaceutical Engineering, Sichuan University of Science and Engineering)
A non-precious metal catalyst for oxygen reduction reaction was prepared by heat-treating a precursor from the mechanical mixture of acetylene black, hexamethylenetetramine and MnCl2.4H2O. The precursor contains 1.0g of acetylene black, 1.0g of hexamethylenetetramine and 0.50g of MnCl2.4H2O. The precursor was heat-treated at 700℃ for 2 hours. In the heat-treating, a nitrogen gas was used as protective gas to get an inertia atmosphere. And the protective gas was controlled as following two modes: one is that the protective gas was shut after 30 minutes and before heat-treating, the other is that the protective gas was not shut in the thorough heat-treating process. The resulted products were labelled as MnHMTA/C(A) and MnHMTA/C(B), respectively.  Figure 1 shows the catalytic activity towards oxygen reduction reaction of the two catalysts. It can be seen that the MnHMTA/C catalyst exhibits good activity to oxygen reduction reaction with an onset reduction potential of 0.55V (vs. SCE). In addition, the activity of MnHMTA/C(B) is better than MnHMTA/C(A). The reason is that the decomposed product of hexamethylenetetramine will exhaust with nitrogen gas in the preparation of MnHMTA/C(A), which affects the formation of active sites and worsens the catalytic activity of the MnHMTA/C(A) catalyst.

This work was supported by the Specialized Research Fund for the Doctoral Program of Sichuan University of Science and Engineering (No. 2012RC16) and the Opening Project of Key Laboratory of Green Catalysis of Sichuan Institutes of High Education (No. LYJ1206, LYJ1401). 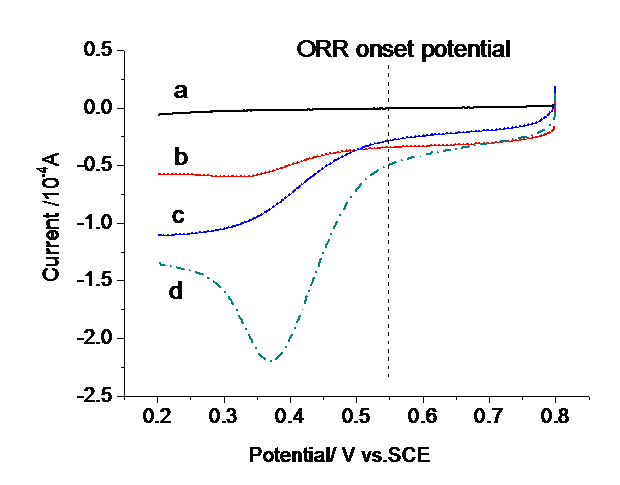