PEFCs are attractive energy source because their total well-to-wheel efficiency is higher than that of internal combustion engine [1]. However, the usage of Pt cathode catalyst must be reduced for widespread commercialization. Core-shell structured catalyst is a strong candidate for the reduction, and it has been reported that the ORR activity of a Pt monolayer (PtML) formed on Pd single crystal and on Pd NPs core can be enhanced [2, 3]. So far, we have prepared carbon supported Pd core (Pd/C) by an impregnation and the resulting Pd NPs have a wide size distribution. It was found that the ORR activity of Pd core-Pt shell structured catalyst (Pt/Pd/C) was declined when the catalyst was synthesized using Pd/C core with a smaller mean diameter [4]. In this study, we developed a method removing small Pd NPs to improve the ORR activity of Pt/Pd/C catalyst. The method uses equilibrium potentials of Cu2+/Cu and of O2/H2O (Cu-air treatment), which mimics potential cycling using a potentiostat. The ORR activity of the Pt/Pd/C catalysts synthesized using Pd/C core after the Cu-air treatment was investigated.

A Pd precursor was impregnated on a carbon support and thermally reduced under N2 atmosphere. 300 mg of the Pd/C core (Pd mean diameter: 3.8 nm, 34 wt.%) was dispersed in 0.1 M H2SO4 containing 10 mM CuSO4 and stirred at 30°C for 5 h with and without coexistence of a metallic Cu sheet under air bubbling (Cu-air and air treatments, respectively). The treated Pd/C core was re-dispersed in 0.05 M H2SO4 containing 10 mM CuSO4 and stirred for 5 h at 5°C with coexistence of a Cu sheet under Ar bubbling to form Cu shell on the Pd core surface (Modified Cu-UPD method [5]). Then, the Cu mesh was removed and K2PtCl4 was added at 5°C to replace Cu shell with Pt, obtaining Pt/Pd/C catalyst. The Pt/Pd/C catalyst was characterized with TG, XRD, XRF, TEM and CV. ORR activity of the catalyst was evaluated with the RDE technique in O2 saturated 0.1M HClO4 at 25°C. Accelerated durability tests (ADTs) were performed using rectangular potential cycling (0.6 V 1.0 V vs. RHE) in Ar saturated 0.1 M HClO4at 80°C for 10,000 cycles. 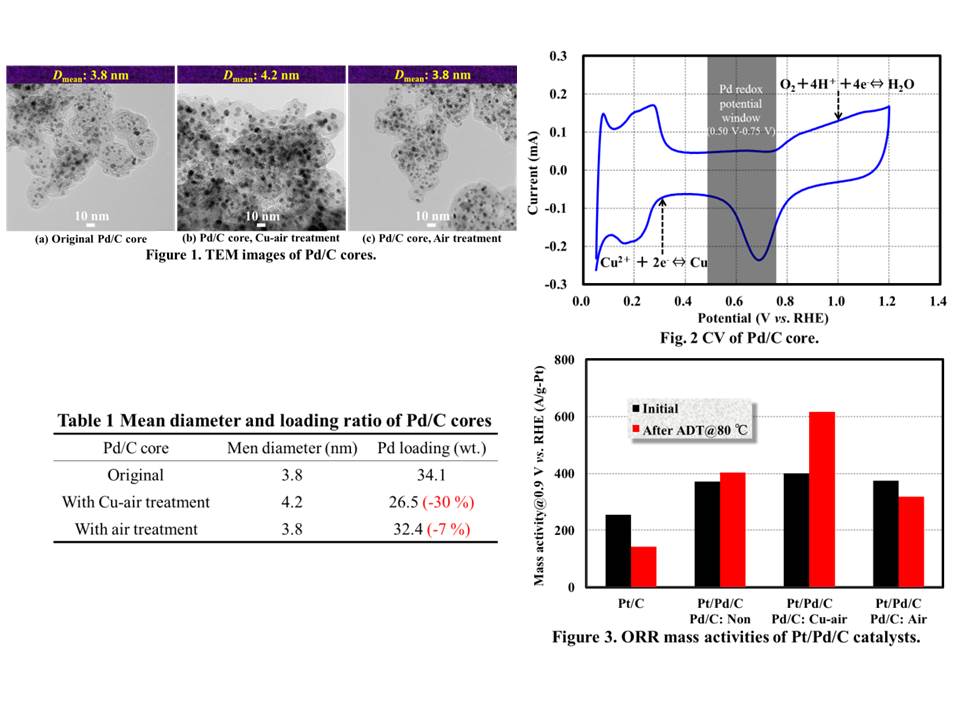