210
Analysis of Ion Transport in Solution Electrolytes for Electrochemical Capacitors

Sunrise, 2nd Floor, Star Ballroom 1 (Moon Palace Resort)
M. Saito (Division of Applied Chemistry, Institute of Engineering, Tokyo University of Agriculuture and Technology), S. Kawaharasaki (Tokyo University of Agriculture and Technology), K. Hayamizu (University of Tsukuba), and S. Seki (Central Research Institute of Electric Power Industry)
In recent years, electric double layer capacitors (EDLCs) have attracted much attention not only for small electric devices as smart phone and tablet PC, but also for large power sources in electric vehicles. The advantage of EDLCs is a high-rate capability and good cycleability, which are due to the fast charge/discharge mechanism by using electric double layer regardless of Faradaic reaction with electrodes. Also, lithium ion capacitors (LICs) with Faradaic reaction electrodes such as graphite anode on the one side have been intensively developed to solve the small energy density of EDLCs. The performances of capacitors (EDLCs and LICs) strongly depend on the electrolyte properties, i.e. the ionic conductivity and electrochemical stability. In this study, we separately measured self-diffusion coefficients D of ions and solvent in the solution electrolytes for EDLCs and LICs by a pulse gradient spin-echo (PGSE) NMR. The viscosity and ionic conductivity were also examined to discuss the relationship with D values. Moreover, the interactions between ions and ion-solvent were evaluated from the DFT calculations.

1 M solutions of (C2H5)4NBF4(TEABF4) and LiBF4 in propylene carbonate (PC) were obtained from Kishida Chemical Co, Ltd. TEAPF6 (99%, Aldrich), TEATfO (98%, Wako Pure Chemicals) and (C2H5)3CH3NBF4 (TEMABF4) (98%, Tokyo Chemical Industry Co., Ltd.) were used as supporting salts, and dissolved in PC (Wako Pure Chemicals) as a solvent in an Ar-filled dry box to prepare their 1 M solutions. The solution electrolytes were subjected to the PGSE-NMR for measuring the D values of cations (Li+(7Li), TEA+(1H), TEMA+(1H)), anions (BF4-(9F), PF6-(9F)) and solvent (PC(1H)) [1]. The viscosity and ionic conductivity of electrolytes were evaluated by a viscometer (anton paar) and an AC impedance analyzer (Bio-Logic), respectively. The interaction energies between cation-anion and ion-solvent were estimated by DFT calculations with Gaussian09.

This study was supported by JST “A Tenure-track Program” from MEXT, Japan. 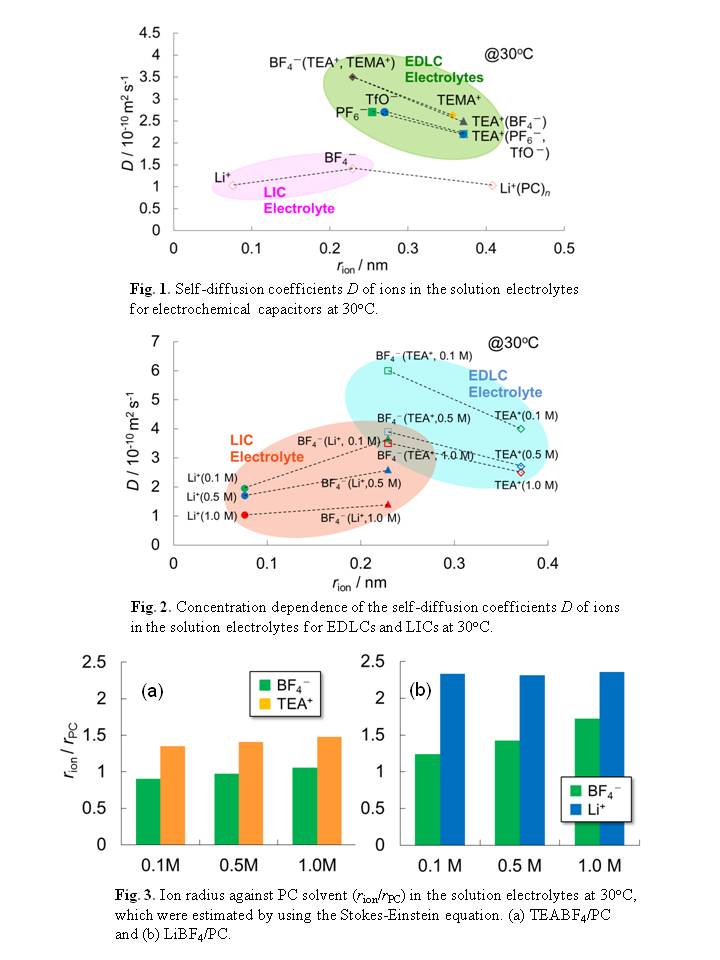