HOPG substrate was scraped by Scotch tape in air and cleaned by annealing at 773 K for 30 min in ultra-high vacuum (UHV; ~10－8). Pt-Ni NPs were synthesized by APD on the HOPG at 773K. Pt and Ni were synchronously deposited from respective arc plasma sources (ALVAC ARL-300). The deposited mass of Pt and Ni were estimated by quartz-crystal-microbalance installed in APD chamber. To control Pt-Ni NPs alloy compositions, arc voltages of Pt and Ni are changed independently from 100 to 180V. The Pt-Ni NPs compositions were evaluated by XPS and their microscopic structures were observed by HAADF-STEM. The Pt-Ni/HOPG samples were transferred from UHV to electrochemical (EC) setup without exposure to air: cyclic voltammetry (CV) was conducted in N2-purged 0.1M HClO4. After that, linear sweep voltammetry (LSV) was applied by using rotational disc electrode (RDE) method. The ORR activity was evaluated from jkvalues at 0.9 V estimated from Koutecky-Levich Plots.

By controlling Pt and Ni arc voltages, we synthesized Pt-Ni NPs with Pt:Ni compositions of 82:18, 47:53 and 17:83. Then, electrochemical dealloying [2] of the APD synthesized three samples was conducted in N2-purged 0.1M HClO4 by applying potential cycles between 0.05 and 1.0 V (sweep rates: 500mV/s). Fig.1(a) shows CV curves for the APD-Pt-Ni/HOPG (PtxNiy) ­after electrochemical dealloying. Although dealloyed-Pt82Ni18 and Pt47Ni53 show lower- and higher-potential-shifts of hydrogen- and hydroxyl-related regions relative to APD-Pt/HOPG (Pt100), the Pt17Ni83 exhibits marked extension in both regions. Fig.1(b) summarizes ORR activities: the dealloyed Pt17Ni83 shows highest ORR activity among the evaluated samples: its mass activity is 10 times higher than Pt/C catalyst [3]. A HAADF-STEM image of dealloyed-Pt17Ni83was shown in Fig.1(c). The image clearly shows that 2 to 3 nm nanoparticles are piled up on the substrate with thickness of ca. 20 nm. Alloy composition of the dealloyed Pt17Ni83 is estimated to be Pt:Ni = 73:17 by EDX. These results suggest that the nanoparticle-layered ultrathin film of Pt-Ni could be one of the highly-active and cost-effective ORR catalysts.

This study was supported by NEDO of Japan. 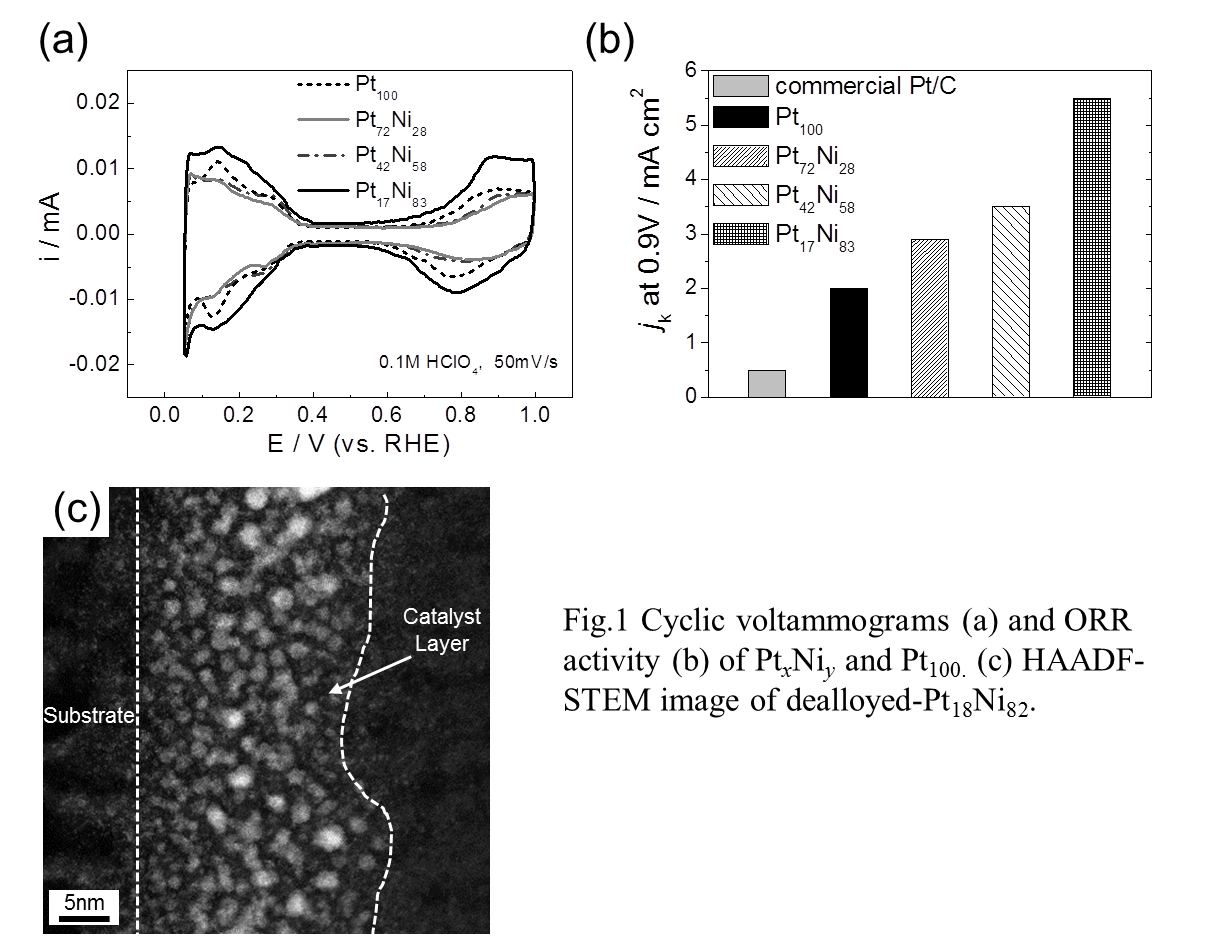