Sunrise, 2nd Floor, Galactic Ballroom 2 (Moon Palace Resort)
N. C. Rosero-Navarro, T. Yamashita, M. Higuchi, and K. Tadanaga (Division of Materials Chemistry, Faculty of Engineering, Hokkaido University)
The ceramic solid-electrolyte Li7La3Zr2O12 (LLZO) with a garnet crystal structure has developed as a promising solid electrolyte material. Positive properties: high ionic conductivity (4x10-4 Scm-1at 25ºC) [1], electrochemical stability with Li metal, and thermal and chemical stability. However, the conductivity of this material remains about two orders of magnitude lower than that of a common liquid organic electrolyte. The main disadvantage is related with the loss of lithium produced during the sintering process up to 1200ºC to obtain the cubic structure, responsible of produce the high conductivity. From this point of view, using a solution process for the development of this kind of electrolyte materials is a very attractive alternative in order to obtain lower thermal treatment. In this work, we explore the use of sol-gel process to obtain Lithium garnet-type oxides Li7La3(Zr2−X, NbX)O12(LLZNbO, X=0–1) at low temperatures. The partial substitution of Nb in the typical LLZO improves the ion conductivity based in their dependence on the lattice parameter [2].

The sol-gel synthesis was developed using lithium nitrate, lanthanum nitrate, zirconium butoxide and niobium ethoxide as precursors. Ethylacetoacetate was used as a stabilizing agent for the alkoxides and ethanol as solvent. Firstly, the lithium and lanthanum salts were dissolved in ethanol. Separately, the zirconium and niobium alkoxides were reacted with stabilizing agent. The molar relation between Zr/Nb and stabilizing agent was adjusted in order to prevent the fast reaction with the Li/La solution. After 1 hour, the solutions were mixed and then, the final solution was stirred at 25ºC during 1 hour until a white gel was obtained. The gel was dried at 80ºC for 24 hours. Further, the powder was ground and calcined at 700ºC for 5 hours. The calcined powders were attrition milled with 4 mm diameter ZrO2balls in a toluene media at 300 RPM for 6 hours. The powder were pressed into pellets and sintered at 900ºC for 10 hours.

The powders obtained after calcination showed wide particle size distribution between few microns until ~10µm, and some agglomerates were observed with sizes of ~20µm. The incorporation of niobium in the pristine LLZO produces bigger particles with regular shape; the effect was more evident with higher concentration of niobium, as shown in Figure 1. Pellet using unmilled powder produce materials with low relative density, 45% and 55% for LLZO and LLZNbO, respectively. The reduction of the particle size using ZrO2 ball milling resulted in an increase of the relative density upto 75% for Li7La3(Zr1.75, Nb0.25)O12. Figure 2A shows the small and regular particle shape obtained for the LLZO after milling (compare Fig.1A). However, the individual particle observed after sintering is an evidence of lack of pellet densification. Large particles and open pores were observed in the surface view, Figure 3A. On the other hand, the incorporation of Nb in the garnet crystal structure produces the binding of the particles, Figure 2B-D. Figure 2B displays the good sintering of the sample Li7La3(Zr1.75, Nb0.25)O12 with low presence of pores. Sintering is also verified on the surface of the pellet, Figure 3B, where the presence of individual particles was minimum. Higher Nb doped concentration presented low relative density (~60%). XRD patterns of undoped LLZO displayed tetragonal phase, while all LLZNbO compositions showed cubic phase and a small peak assigned to La2Zr2O7 was observed in Li7La3(Zr1.75, Nb0.25)O12. The Lattice parameter varied from 12.9463Å to 12.9203Å with the increase of Nb concentration (12.9682Å for LLZO sintered at 1230ºC[1]).  The conductivity obtained was in the order of 10-6 to 10 -7S/cm at 50ºC. 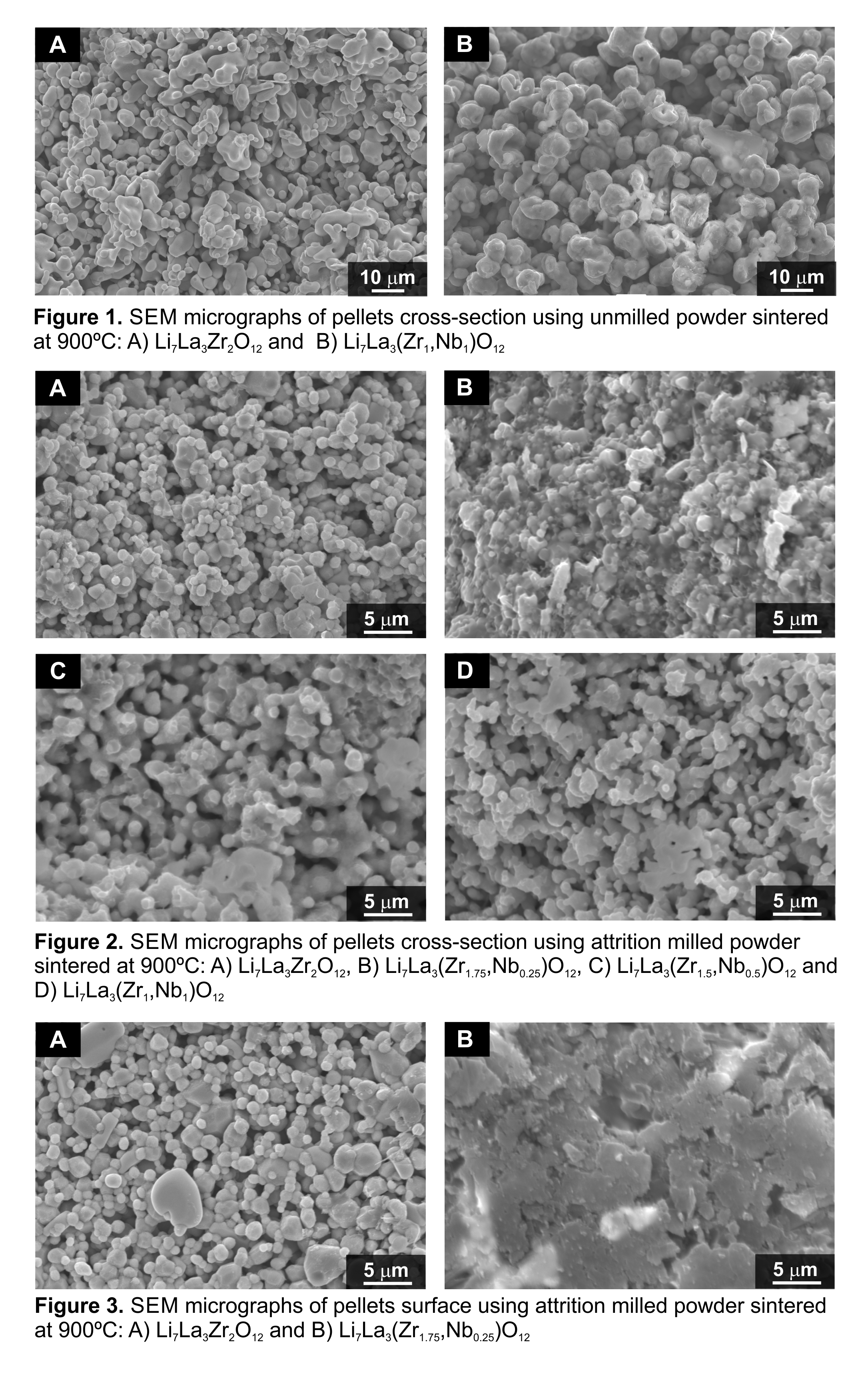