Solid state batteries offer increased safety, high voltage stability, and simpler electrolyte chemistry than organic electrolytes. Their inherent protection from dendrite growth gives the capability to use metallic lithium anodes. Recent advances have improved conductivity to within an order of magnitude of organic electrolytes at room temperature. However, interfacial resistance between electrodes and the electrolyte remains a pressing concern. In a typical planar battery, this high resistance per area is magnified by low interfacial surface area.

Li7La3Zr2O12 garnet was produced in a conventional solid state method. 10% excess LiOH-H2O and stoichiometric amounts of La2O3 and ZrO2were ball milled in ethanol for 24 hours. The milled materials were added to an alumina crucible, calcined at 900 ºC for 4 hours, and milled again.

A colloidal deposition of this slurry is prepared with polyvinyl butyral (PVB), benzyl butyl phthalate (BBP), and Solsperse dispersant in ethanol.

Calcined powder is added to toluene and ethanol solvents with a binder system containing PVB, BBP, and menhaden fish oil as a dispersant. This preparation is milled for two days, then degassed in preparation for tape-casting.

After tape-casting, tapes are drop-coated with the colloidal slurry and another tape is applied on top. This structure is held at 500ºC for 1 hour to burn off binders then heated to 1100 ºC for 1 hour. This produces a three layer porous-dense-porous scaffold of electrolyte that will maintain electronic isolation between electrodes.

Symmetric cells with two cathodes are produced by infiltrating a glycine/metal-nitrate solution into the pores of each side and combusting. For two-anode symmetric cells, lithium is lightly pressed into both sides at 350 ºC.

Electrochemical impedance spectroscopy was performed between room temperature and 300 ºC using a 10 mV amplitude between 10 MHz and 100 mHz.

Figure 1 shows a cross section of a lithium-penetrated Li-garnet scaffold showing the fracture plane of the garnet(light) fully coated by the lithium (dark). Figure 2 shows the Nyquist plot of a full cell made with a lithium-penetrated scaffold. The bulk conductivity shown in the inset is fairly low at 20 Ω compared to the 1000 Ω overall cell impedance. 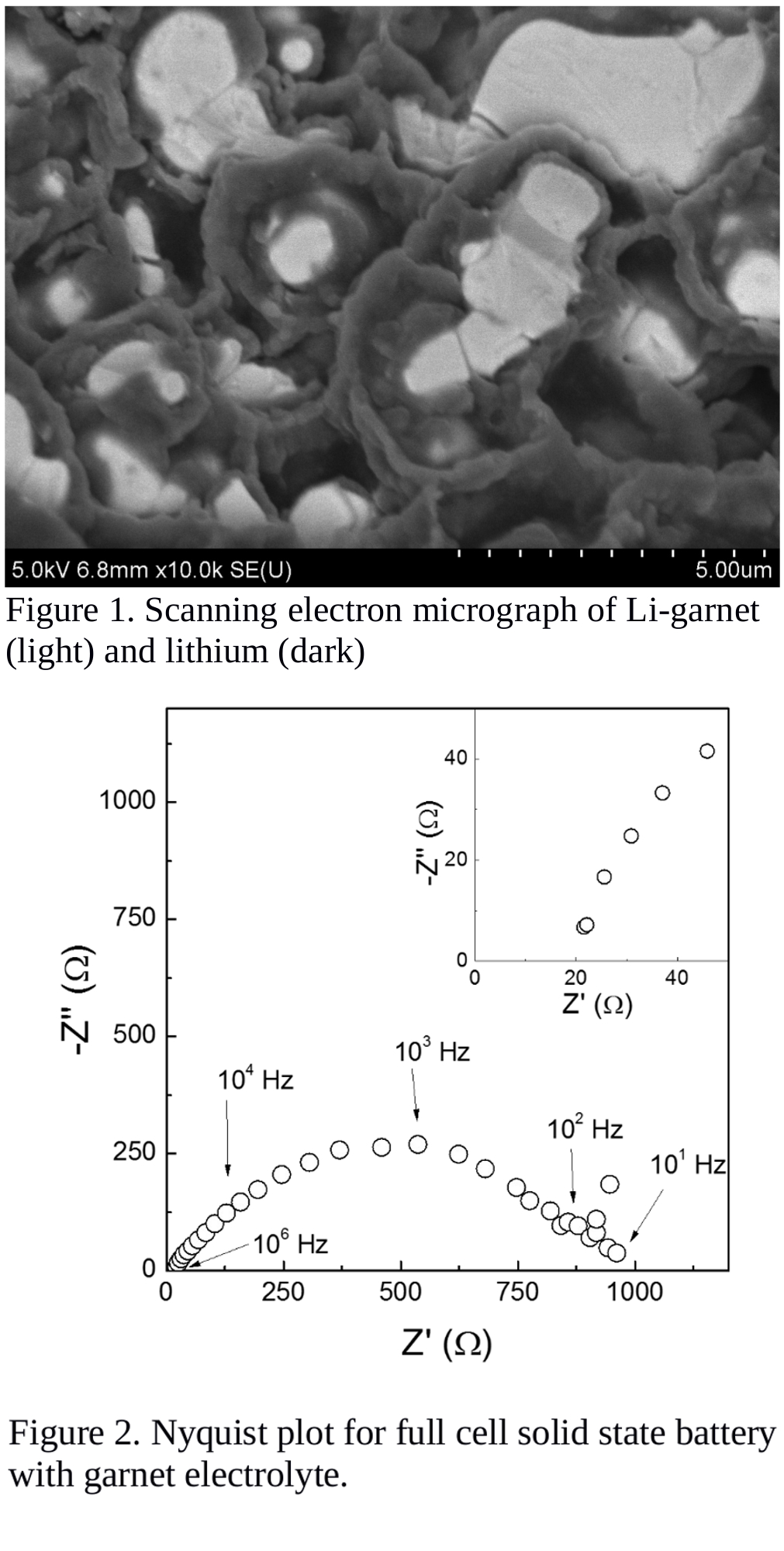