Sunrise, 2nd Floor, Galactic Ballroom 2 (Moon Palace Resort)
A. M. Haregewoin, E. G. Leggesse, B. J. Hwang, J. C. Jiang (National Taiwan University of Science and Technology), F. M. Wang (National Taiwan University of Science and Technology, Taipei, Taiwan), and S. D. Lin (National Taiwan University of Science and Technology)
One of the major concerns in lithium ion battery is the composition of the electrolytes as it governs some of the vital physicochemical properties of the electrolytes such as viscosity, ionic conductivity, thermal stability and wettability. Most important properties of lithium ion batteries are related to the properties of the solid electrolyte interface (SEI) layer formed on the electrode surface. The SEI in turn is mainly dependent on the electrolyte composition [1]. Therefore, understanding the nature, mechanism and property of the SEI formation in different electrolyte composition is crucial in selecting electrolytes. In this work,  we  report  a  direct  comparison  of  the  reduction  of propylene  carbonate  (PC), ethylene carbonate  (EC) and diethyl carbonate  (DEC) as a single, binary and ternary solvent  systems. Battery performance test, cyclic voltammetry (CV), electrochemical impedance spectroscopy (EIS), and scanning electron microscope (SEM) is employed to study the nature of the surface films formed.

The reduction products are determined by  using  ex-situ  attenuated  total  reflectance  Fourier  transform  infrared  spectroscopy (ATR-FTIR),  in  the  glove  box,  after  employing  linear  sweep  voltammetry  (LSV)  to certain  potential  regions.  EC/PC/DEC  based electrolyte shows  better  capacity  retention  and less  impedance  than  the  EC/PC  system.  In  all systems, the FTIR results indicate  the  formation of (CH3CH2OCO2Li)2  and  Li2CO3  due  to  the reduction  of  PC.  EC  is  reduced  to (CH2OCO2Li)2  and  Li2CO3  in  both  the  binary and  ternary  solvent  system.  The  FTIR  result  at the potential where DEC reduction occurs shows the  formation  of  (CH2=CH-OCO2CH2CH3)Li which is less stable and forms a less-passivating layer  in  the  first  cycle.  However, this product can further react with another species in the subsequent cycles and form a stable SEI. 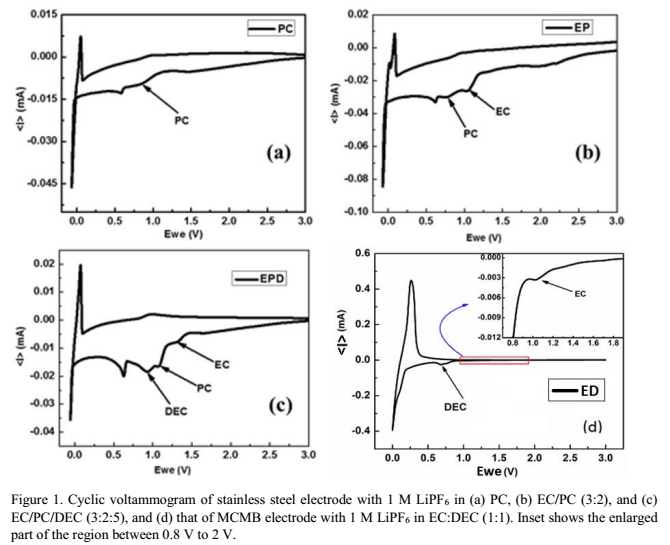