Ethylene sulfite (ES) has been widely studied by many researchers and has been regarded as an effective SEI-forming additive, especially in PC based electrolytes. Wrodnigg et al. [2] found the introduction of 5 vol % ES to a PC-based electrolyte could suppress or even prevent PC co-intercalation into graphite. Ota et al [3] suggested that when ES was used as an electrolyte additive, the SEI film on the graphite anode contained both inorganic materials like Li2SO3 and organic materials like ROSO2Li. The bulk of the studies on ES have focused upon its effect on the carbon electrode.

In this presentation, a detailed study of ES and/or VC as electrolyte additives for Li[Ni1/3Mn1/3Co1/3]O2/graphite pouch cells was investigated using UHPC [4] and a precision storage system at Dalhousie University [5].  Gas evolution during formation and cycling, coulombic efficiency (CE) and charge endpoint capacity slippage during cycling as well as charge transfer resistance before and after cycling were examined and compared.

Dry Li[Ni1/3Mn1/3Co1/3]O2 (NMC)/graphite pouch cells (225 mAh) were obtained from Whenergy (Shandong, China). Before electrolyte filling, the cells were cut just below the heat seal and dried at 80°C under vacuum for 14 h to remove any residual water.  Then the cells were transferred immediately to an argon-filled glove box for filling and vacuum sealing.

Cells cycled using the UHPC were tested between 2.8 and 4.2 V at 40.0 ± 0.05 °C using currents corresponding to C/20 for 15 cycles where comparisons were made. Electrochemical impedance spectroscopy (EIS) measurements were conducted on NMC/graphite pouch cells before and after cycling on the UHPC.

Figure 2 shows the Nyquist plots for NMC/graphite pouch cells with different amounts of ES and/or VC after formation and after UHPC cycling measured at 3.80 V and 10°C. Figure 2 shows that cells containing only ES show obvious impedance growth during cycling. When ES (1% or 2%) is used in combination with VC, the impedance was dramatically decreased both before and after cycling.  Cells with 2% VC + 2% ES have the lowest impedance after cycling, only half of that of cells with 2% VC.  Therefore, there appear to be significant benefits of the combination of VC and ES for high power cells. 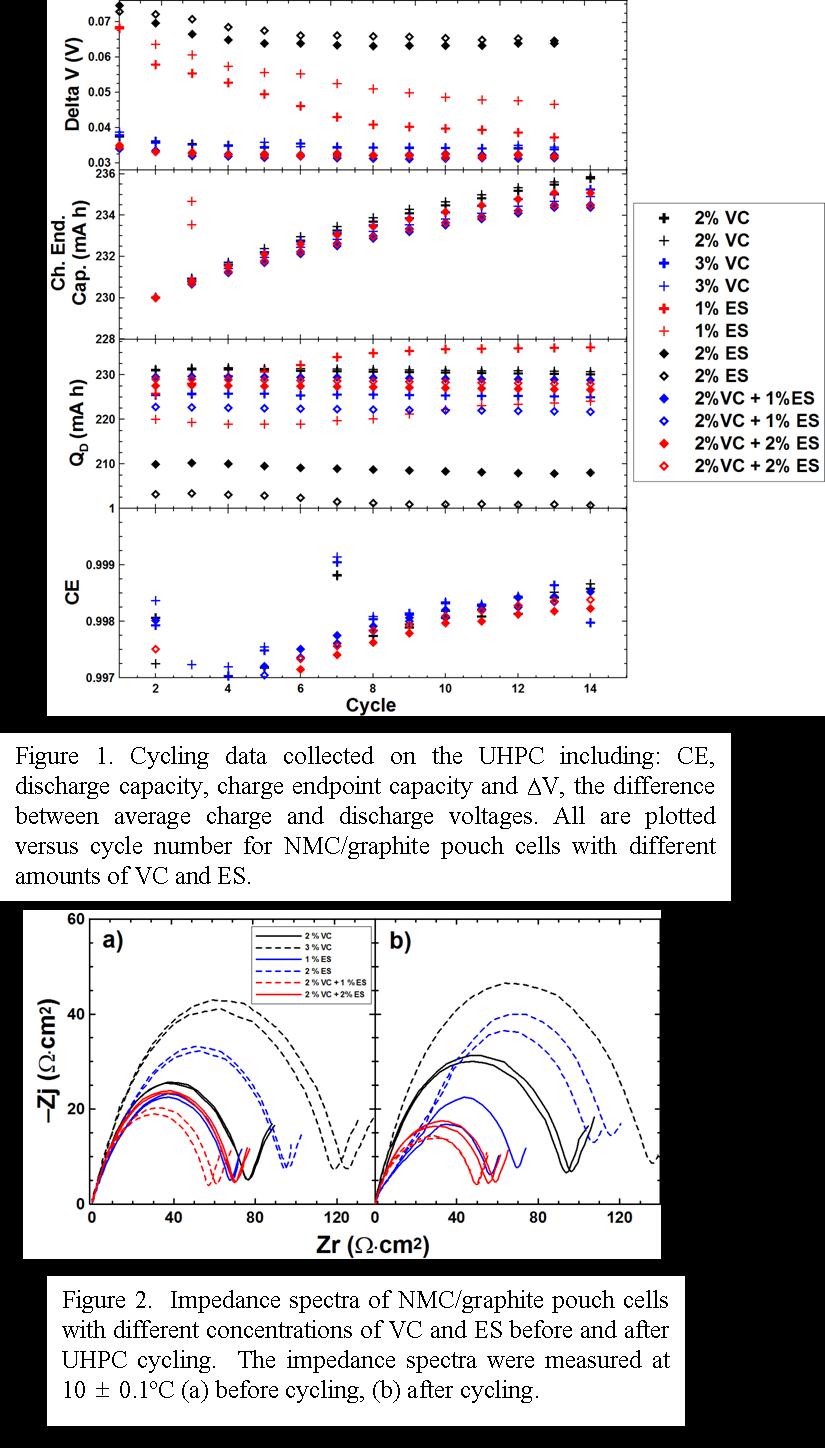