SPE-bl-1 [3,5,6] and SPK-bl-1 [4,7] membranes (Fig. 1) were obtained by casting on a PET substrate, and the membrane surfaces attached to the substrate were used for the CS-AFM measurements. GDEs were prepared as in our previous papers, and membranes were hot pressed with the GDEs. [5-7] On the surfaces, CS-AFM measurements were carried out under 5% H2atmosphere at controlled temperature and humidity to obtain morphology and current images simultaneously. For investigating the influence of the proton current, a tip bias voltage, -0.4, -0.6, or -0.8 V (negative voltage at the tip), was applied between the AFM tip and the GDE. For the influence of hot water, the membranes were treated in Milli-Q water at 60 °C for 60 min.

Fig. 2 shows the topographic (A)-(C) and current (A’)-(C’) images at different tip bias voltages on SPE-bl-1 to understand the influence of proton current. The surface was flat with only nanometers of corrugations. Notably, the three images at different voltages were identical. In current images, proton-conductive areas as bright spots approximately 5 - 25 nm in diameter were seen on the surface, indicating a phase-separation of hydrophobic and hydrophilic domains developed on the SPE-bl-1 surface. [5,6] The current images greatly changed at different bias voltages. With increasing the applied bias voltage, the conductive areas observed at a lower voltage became larger and brighter, whereas new conductive areas also appeared. After the tip bias voltage changed back from -0.8 V to -0.6 and -0.4 V, the conductive areas were still much larger than those at the same bias voltages before the high voltage treatment.  Fig. 3 shows the topographic (A)(B) and current (A’)(B’) images before and after hot water treatment on SPK-bl-1. After the hot water treatment, the surface morphology on the membrane surface changed; round-shaped structures were newly formed with diameter of 50-100 nm and height of 5-15 nm (Fig. 3(B)). By the hot water treatment, the conduction area largely increased from 54% (Fig. 3(A’)).to 97% (Fig. 3(B’)). The average pseudo-current density(defined in ref [5]) became three times higher.

By using CS-AFM, the positive influences of proton current and hot water, both essential during conditioning, were shown on the conductivity at surface. The detailed analyses will be presented.

Acknowledgement  This study was supported by “HiPer-FC Project”, NEDO, JAPAN 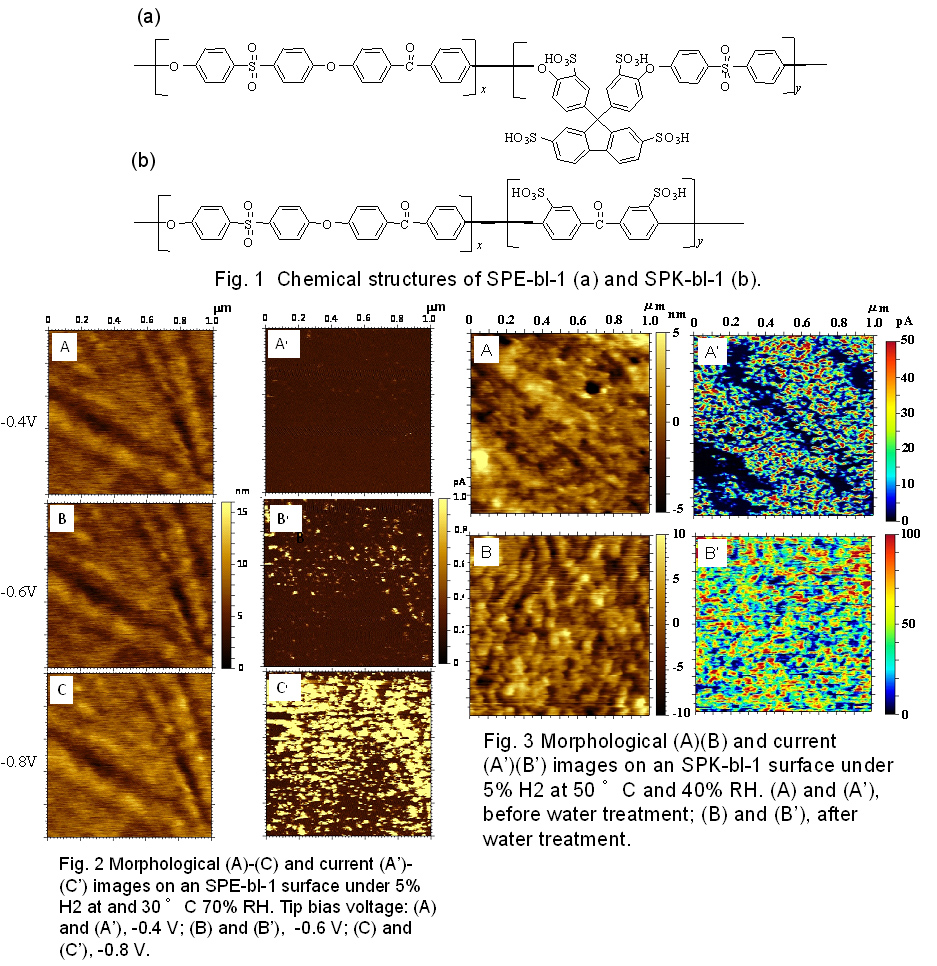