Sunrise, 2nd Floor, Jupiter 4 & 6 (Moon Palace Resort)
D. K. Paul (University of calgary), Y. Zou, J. Li (Automotive Fuel Cell Cooperation), and K. Karan (University of Calgary)
Understanding the nanostructure and morphology of perfluorosulfonic acid (PFSA) ionomer and its correlation to functional properties are extremely important for designing new ionomer materials. A number of structural models of ionomer (mainly Nafion®) have been proposed based on x-ray scattering data to explain the impact of morphology on its water swelling and transport properties. One of the earliest models is cluster network model where spherical ionic clusters, connected by a narrow channel are embedded by amorphous fluorocarbon matrix.1 Alternatively, Gebel and coworkers have proposed fibrillar model, which consists of fluorocarbon crystallites surrounded by ionic groups.2 Most recently, parallel water channel model is proposed by Schmidt-Rohr et al. where large fluorocarbon crystallites consists the parallel channel that are decorated with the sulfonate group inside.3The common element to these models is a phase separated morphology – fluorocarbon phase and ionic cluster phase. However, disagreement regarding the shape, size and behaviour of the phases remain. To resolve the controversy, direct imaging technique such as electron microscope have been employed but never been successful to resolve the real nanostructure and morphology. In our approach, we have employed transmittance electron microscope (TEM) to directly image the well-defined crystalline phase (fluorocarbon matrix) and amorphous phase (ionic cluster).

The ionomer film was prepared on the spongy carbon film supported by Cu grid adopting self-assembly method4,5. Both free-standing and carbon-supported films ranging in thickness of around 4 to 50 nm were generated and investigated by the instrument Tecnai TF20 G2 FEG-TEM (FEI, Hillsboro, Oregon, USA) at 200kV acceleration voltage. The image was captured by Gatan UltraScan 4000 CCD (Gatan, Pleasanton, California, USA) at 2048x2048 pixels.

Although a number of research papers have discussed the crystalline phase in ionomer structure but found it challenging to image because of the high degree of disorderdness of the ionomer materials. Therefore, researchers mostly relied on SAXS/SANS data to depict the structural morphology. Hence, it is very exciting to present images where the crystalline phase is clearly evident by direct TEM imaging of Nafion® ionomer Nanofilm without any chemical modification and treatment (Figure 1).  The highly ordered crystalline phase consists of a number of lamellae that are surrounded by the amorphous phase. The crystalline phase varies from 4 to 6 nm in size. The d spacing of those lamellae was calculated to be 0.37 nm. This particular structure of ionomer is consistent with the Fibrillar model proposed by Gebel et al.2where the majority of hydrophobic, Teflon-like phase stay in the high density crystalline region and amorphous phase consist of ionic domains (Figure 2). These results may help resolve the debate around ionomer structure model.

It is also interesting to see that the crystalline phase is evident regardless of equivalent weight of ionomers whereas the size, shape and extent of the crystalline phase depends on the equivalent weight. We plan to discuss the thermal annealing and dispersion effect on the morphological change of the ionomer in the nanofilms. The morphology of supported film comparing with freestanding nanofilm also will be discussed. 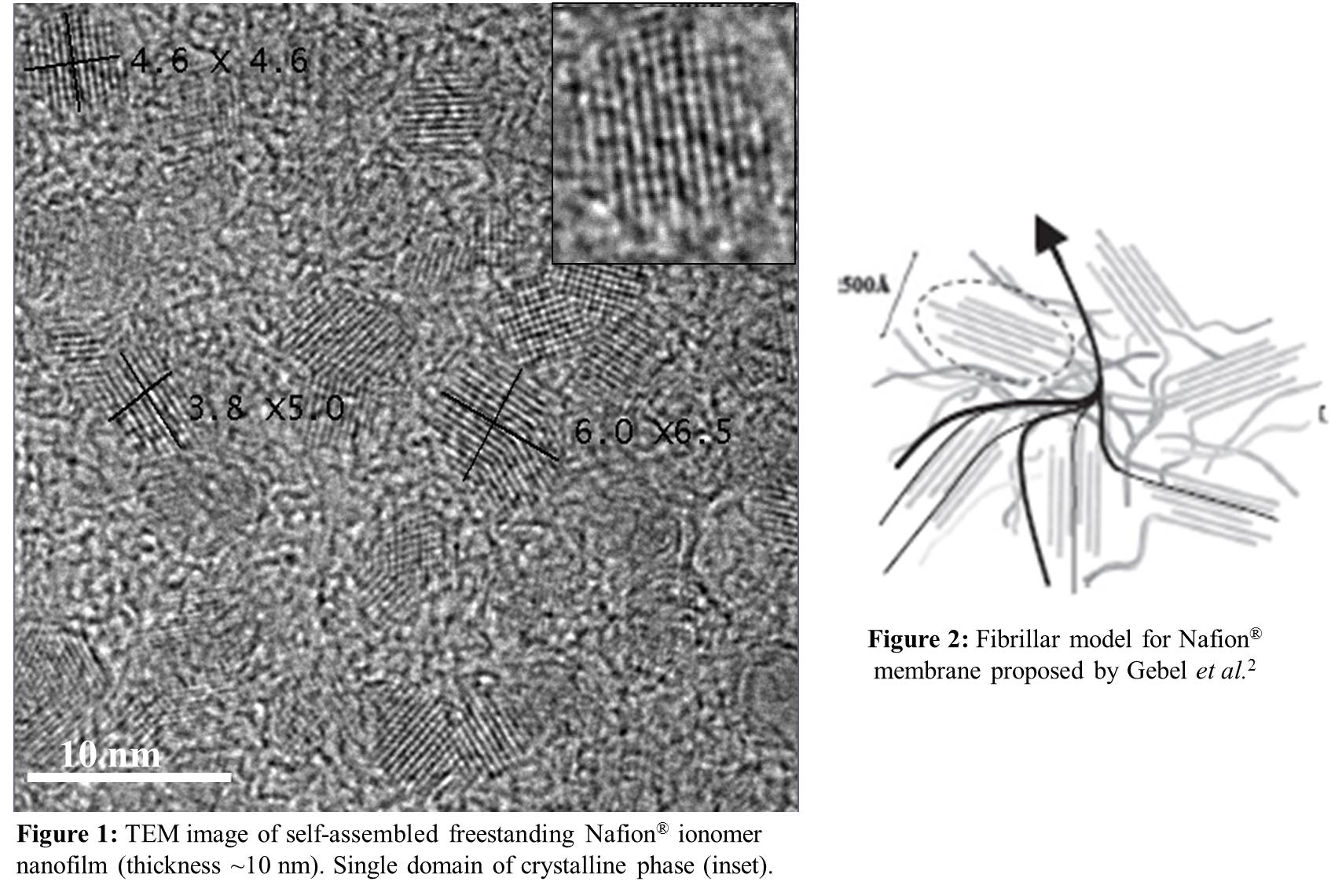