Expo Center, 1st Floor, Center and Right Foyers (Moon Palace Resort)
Y. Minamida, Z. Noda, A. Hayashi, and K. Sasaki (Kyushu University)
Polymer electrolyte fuel cells (PEFCs) have recently been paid great attention owing to commercialization of fuel cell vehicles (FCVs) since 2015. However, PEFCs still have some problems to be overcome, such as improvement of cost and durability for the next generation. In our study, improvement on durability of electrocatalysts is targeted by reducing the mobility of Pt particles on the carbon support. Particularly, Pt particles are introduced into the nano-space of Mesoporous Carbon (MC), which has the nano-channel structure with a diameter of ca. 10 nm. Such encapsulation of Pt in the carbon nano-space leads to successfully reducing the mobility of Pt. MEAs have been prepared with such electrocatalysts as cathode materials, and the sufficient performance has been confirmed, so far. In this study, we have particularly focused on  the triple phase boundary formed inside the carbon nano-space. The methods of Nafion introduction were controlled in order to study how they influence on IV performance and durability.

Electrocatalysts were synthesized from platinum (Ⅱ) acetylacetonate as a precursor by supporting ca. 30 wt% Pt on our original MC, and named as Pt/MC. Pt/MC was used only for the cathode. For the anode, a commercial Pt/Ketjen black catalyst (TEC10E50E, TKK Corp.) was in use. Then, MEAs were prepared by spraying the slurry of electrocatalysts and Nafion on the both sides of Nafion membrane, followed by hot-pressing. The solvents for introducing Nafion into carbon nano-space were controlled by ethanol or hexafluoropropanol.

Based on our previous research work, introduction of Nafion into carbon nano-space is known to depend on the kind of solvents[1]. Therefore, in this study, MEAs were made using hexafluoropropanol, which was thought to be more suitable for introduction of Nafion than regular ethanol. Besides the initial performance of MEAs, their durability was also evaluated, using the cycle test at the potential range where the dissolution and re-precipitation of Pt particles occurs[2]. As a result, the initial activity was higher for MEAs made with ethanol, whereas durability was higher for MEAs made with hexafluoropropanol. Successful formation of the triple phase boundary has led to the increase in durability. Further, we are now working on improving the initial activity by optimizing introduction methods of Nafion. 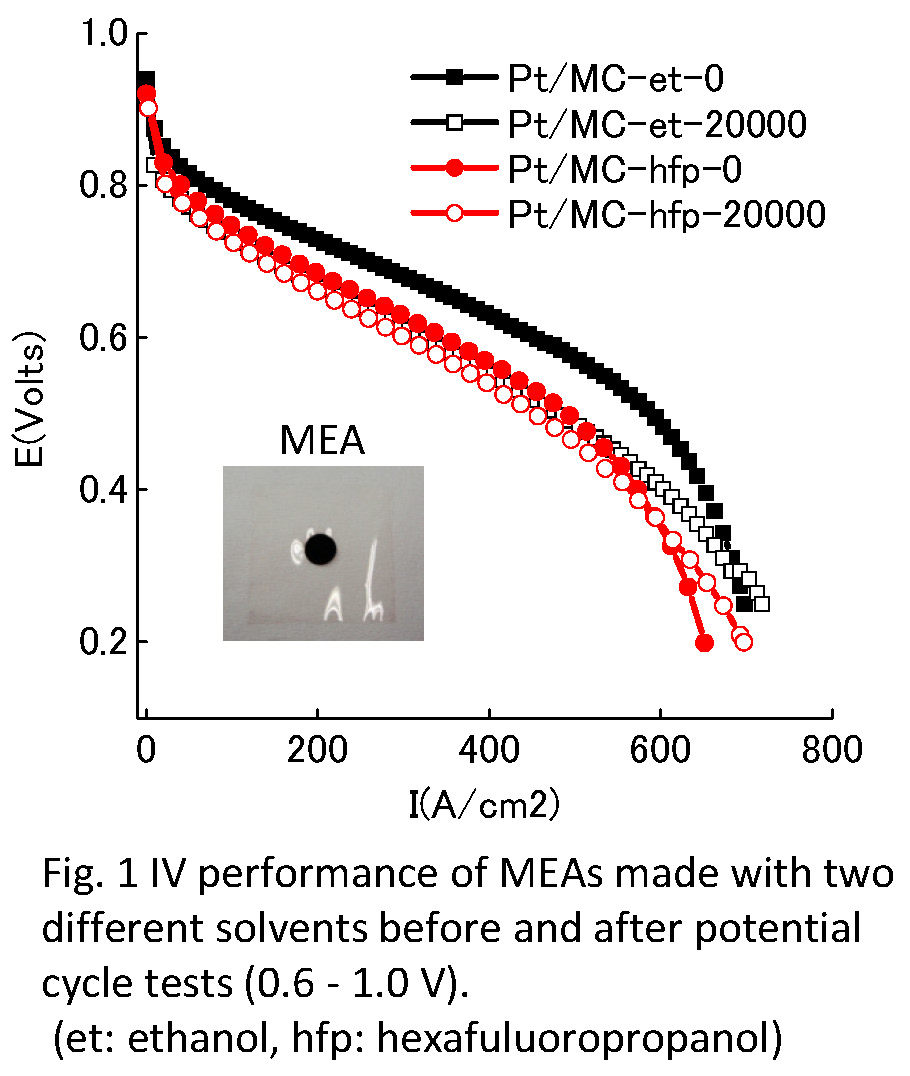