1154
Investigation of Performance and Durability of MEAs at Higher Temperature

Expo Center, 1st Floor, Center and Right Foyers (Moon Palace Resort)
M. Kitamura, Y. Minamida, X. Zhao, Z. Noda, A. Hayashi, and K. Sasaki (Kyushu University)
Polymer electrolyte fuel cells (PEFCs) recently attract more attention because fuel cell vehicles (FCVs) are commercially available from 2015. Even though the technology for the first generation FCVs has been mainly established, for the next generation FCVs, the operation at high temperature is desired in order to improve the power generation efficiency and durability. The target operating temperature is about 120 °C for FCVs. Since there are still technological problems for electrolyte membranes over 100 °C, almost no report is found about either performance or durability under such a condition at present. Here, the objective of our study is to extract the problems on the catalytic degradation at higher temperature. In this study, we have evaluated performance and durability of MEAs under higher temperature like 105 °C and low humidity such as RH57%.

MEAs were manufactured using a standard Pt/Ketjen black catalyst (TEC10E50E, TKK Corp.) and Nafion. Then, their IV characteristics were examined. Regarding to the durability evaluation, two protocols[1]  recommended by Fuel Cell Commercialization of Japan (FCCJ), “load cycles” and “start-stop cycles”, were in use. Three different conditions of operation temperature and humidity (80 °C/RH100%, 105 °C/RH57%, and 80 °C/RH57%) were applied. Then, the effects of such conditions on both performance and durability of MEAs were evaluated.

On evaluation of IV performance in three different conditions before and after the load cycle durability tests, the operation at 105 °C greatly deteriorated the performance than at 80 °C. Also, by comparing two different humidity conditions at 80 °C, the lower humidity led to the smaller degradation. Moreover, the change in electrochemical surface area (ECSA) was examined at the same time, and then the retention of ECSA was lower under both higher temperature and higher humidity, likewise. In addition, SEM observations were performed to see the change in Pt particle size. As a result, Pt grain growth was confirmed after the load cycle durability tests. The average particle size became larger at both higher temperature and higher humidity. In other words, a similar trend to the deterioration of IV performance was obtained. Here, we believe that one possible reason why the deterioration was suppressed at lower humidity comes from the existence of less water relating to the diffusion of Pt ions. Similarly, the examination on the start-stop cycle durability tests will also be reported. 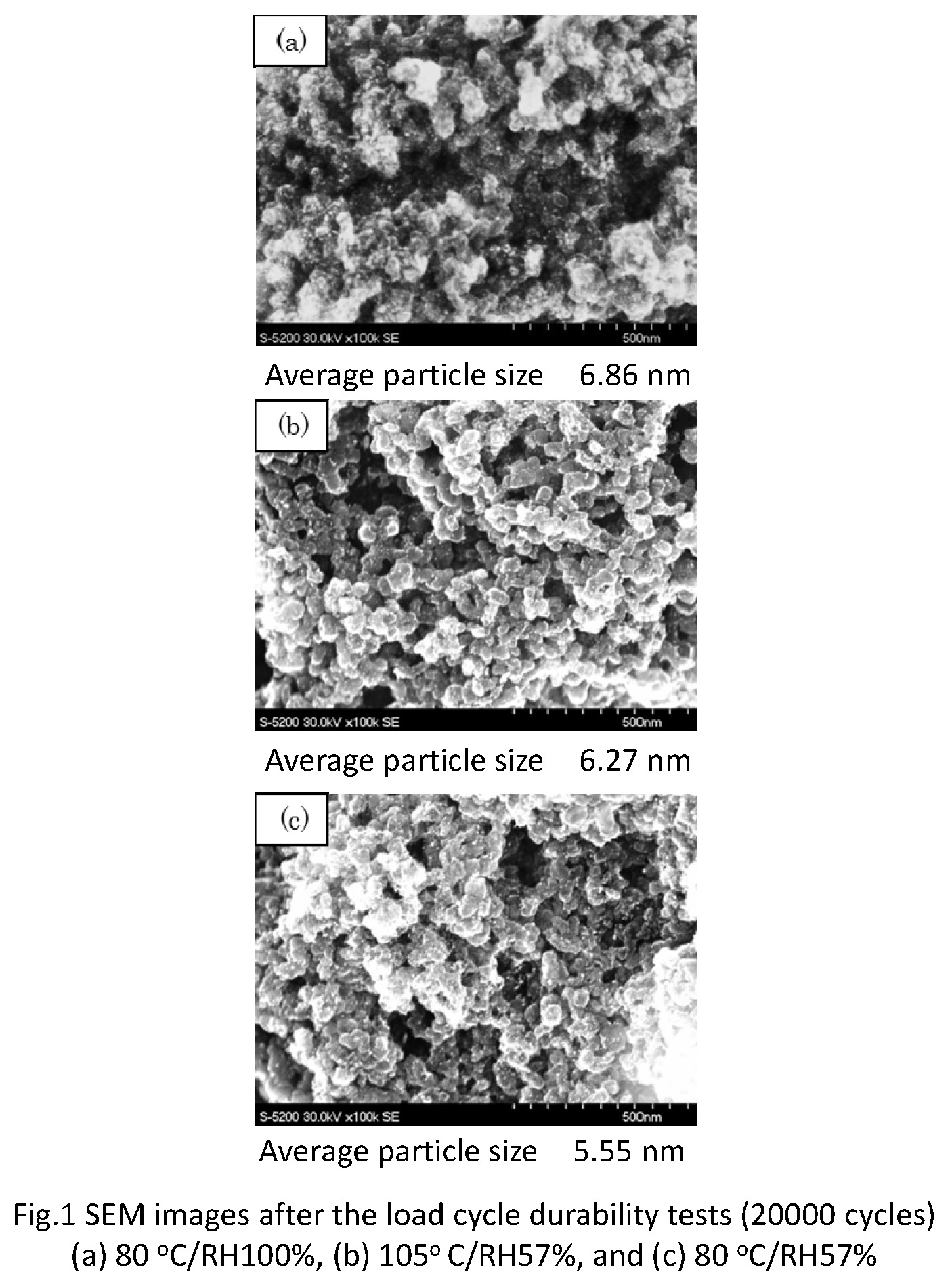