Expo Center, 1st Floor, Center and Right Foyers (Moon Palace Resort)
Y. Yamashita (Interdisciplinary Graduate School of Medicine and Engineering, University of Yamanashi), S. Itami, J. Takano (Honda R&D Co., Ltd., Automobile R&D Center), M. Kodama, K. Kakinuma, M. Hara (Fuel Cell Nanomaterials Center, University of Yamanashi), H. Uchida (Clean Energy Research Center, University of Yamanashi), M. Watanabe, and M. Uchida (Fuel Cell Nanomaterials Center, University of Yamanashi)
In polymer electrolyte fuel cells (PEFC), Pt nanoparticles on high surface area carbon black (CB) supports are used as the cathode catalyst. However, it has been found that Pt/CB catalysts are degraded under PEFC operating conditions due to a combination of processes, which include loss of electrochemically active surface area (ECA) due to agglomeration or dissolution of Pt nanoparticles, and corrosion of the CB supports1). During the start-up of fuel cell vehicles (FCVs), the cathode potential can momentarily climb to more than 1.5 V due to the “reverse current mechanism”, which significantly accelerates the carbon corrosion2). In order to reduce the cost of PEFCs, it is necessary to reduce the amount of Pt by improving the durability, especially for the cathode catalysts. To mitigate the corrosion of the carbon support, the use of graphitized carbon blacks (GCB), for which there is a high degree of graphitization, was found to be effective3).

In this study, we investigated the cathode catalyst durability during a start-up process like that in actual FCV operation. Pt/graphitized carbon black catalysts were tested in this practical start-up process, i.e., the anode gas was successively cycled between air, hydrogen, and nitrogen. First, air was flowed to the anode and cathode for 90 s. Second, H2 gas was flowed to the anode to start up the fuel cell for 90 s. Finally, N2 gas was flowed to the anode and cathode for 60 s. These three steps are defined as one cycle. The effect of the start-up process on the cell performance was evaluated using three types of catalysts (commercial 50 wt% Pt/GCB and commercial 30 wt% Pt/GCB supplied by Tanaka Kikinzoku Kogyo K.K., and 30 wt% n-Pt/GCB prepared in house by the nanocapsule-method). The average Pt particle sizes of 50 wt% Pt/GCB, 30 wt% Pt/GCB and n-Pt/GCB were 3.4 ± 0.7 nm, 3.3 ± 0.5 nm and 2.6 ± 0.4 nm, respectively. All of the catalysts were tested for 1000 cycles. The I-V performances were evaluated under O2 and air at 65 °C with 100% RH before and after the durability test, which consisted of given numbers of start-up cycles (N). Cyclic voltammetry (CV) was also examined to estimate the ECA under N2 at the cathode and H2at the anode at 65 °C and 100% RH every 200 cycles.

Figure 1 shows the changes of ECA values for each catalyst. Before the durability test, n-Pt/GCB showed the highest ECA. This is due to the highly uniform dispersion of small Pt particles on the surface of the GCB support by the nanocapsule method. After 1000 cycles of durability testing, the ECA advantage of n-Pt/GCB was maintained.

Figure 2 shows the changes in mass activity at 0.85 V before and after the durability test for each catalyst. The 30 wt% Pt/GCB and the n-Pt/GCB showed nearly the same initial mass activity. However, n-Pt/GCB exhibited a higher mass activity than that of Pt/GCB after 1000 cycles.

From these electrochemical measurements, it was found that n-Pt/GCB had higher performance and durability compared with those for both commercial Pt/GCB catalysts. It is considered that the both Pt/GCB easily underwent agglomeration and/or increase of particle size by electrochemical Ostwald ripening, because the Pt particles were situated quite closely together. However, the particle agglomeration of n-Pt/GCB was relatively suppressed due to the uniformity both of the Pt dispersion and of the Pt particle size, as described in our previous report4).

This work was supported by funds for the “Research on Nanotechnology for High Performance Fuel Cells (HiPer-FC)” project from the New Energy and Industrial Technology Development Organization (NEDO) of Japan. 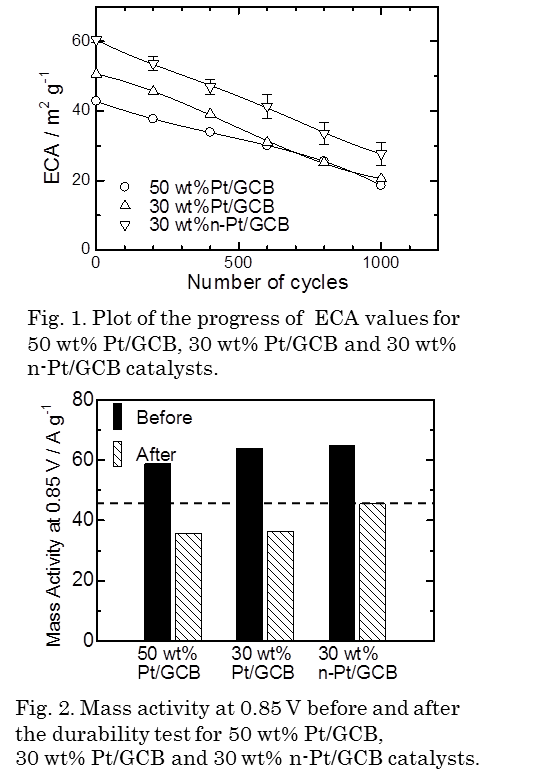