As electrocatalysts for electrochemical hydrogen pumps, carbon-supported Pt nanoparticles have been widely used for hydrogen compression [1] and hydrogen separation from gas mixtures [2, 3]. However, as Pt surfaces can be severely poisoned by the strong adsorption of CO molecules that are generated through the reverse water-gas shift reaction of CO2 and adsorbed hydrogen [4], the Pt catalyst in the anodes can be largely deactivated when H2/CO2gas mixtures are supplied to electrochemical hydrogen pumps.

In this study, we synthesized Ir-based nanocatalysts for the application of hydrogen separation from CO2-rich mixture gas and characterized them by XRD, XPS, TEM, and TGA. The electrochemical characteristics of Ir-based nanocatalysts were investigated by half-cell and single-cell tests, focusing on poisoning under CO2 atmosphere. The Ir-based catalyst demonstrated higher HOR/HER activity than the commercial Pt catalyst, and, by CO2 stripping analysis, it was confirmed that the CO poisoning under CO2 atmosphere was much smaller for Ir-based catalysts. As a result, enhanced hydrogen pump performances could be achieved with the anode feed of H2/CO2mixture. 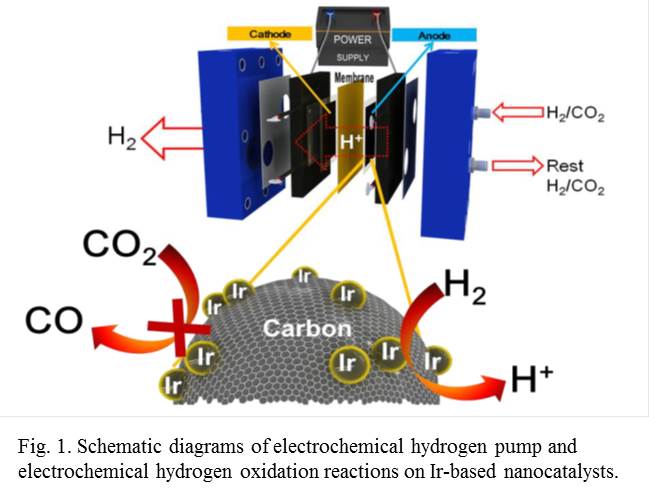