Polymer Electrolyte Fuel Cell (PEFC) is expected as  a new power source in automobiles with high power density and low emission. Although PEFC has many advantages compared with internal combustion engines, the cost reduction and the improvement of performance and durability are needed for its practical application. For improvement of PEFC, it is important to understand the mechanism inside it under various operating and structural conditions and to feedback into the design of membrane electrode assembly (MEA) and bipolar plate constituting fuel cell stack.

In order to visualize inside PEFC, we have been developed a numerical simulation tool calculating the cell and stack performance and physical distributions and a nondestructive, real-time/space visualization technique for oxygen partial pressure in the cathode flow channel and the GDL using oxygen-sensitive luminescent dye film [1].

In this study, as for the first step of our numerical modeling development, the effects of operating condition, for example, cathode flow rate on the test cell as well as commercial-sized cell and stack were investigated.

Inside the fuel cell, multi-physical and multi-scale of phenomena such as multi-component gas, liquid water and heat transport inside the flow channel and the GDL, electrochemical reactions and proton/water transport in the MEA are nonlinearly coupled [2]. These phenomena require too much calculation cost to be solved in high resolution by fully 3-dimensional equations based on computed fluid dynamics (CFD), so it is necessary to apply simplified models. In our modeling, macroscopic models are applied for microscopic phenomena in the catalyst layer and electrolyte such as electrochemical reactions (HOR/ORR) and proton/water transport. And these models are coupled with multi-dimensional heat, gas and liquid water transport equations in which effective parameters such as gas diffusivity and permeability in the GDL and equivalent hydraulic diameter  in the flow field of bipolar plate and the manifold of stack are included [3].

First of all, the performance of 25cm2test cell with single serpentine flow channel was carried out. Hydrogen and air flow rate is 300ml/min, relative humidity is 60%RH, cell temperature is 353.15K and back pressure is 1atm, respectively.

The distribution of oxygen partial pressure in cathode flow channel and on the GDL surface at cathode utilization 80% (0.58 A/cm2) are shown in Figure 1 compared to the measured data by a nondestructive visualization system. The results are good agreement with the measured data and indicate that the numerical prediction of current density distribution is valid in our model.

Applying the validated model, the effect of cathode flow rate on the performance of short stack with 20 cells (max. 5kW) was carried out. As for the other operating conditions, relative humidity is 50%RH, cell temperature is 343.15K and back pressure is 1.5atm, respectively. Figure 2 shows the effect of cathode utilization on the distribution of normalized in-flow rate and ORR gain for each cell at 0.5A/cm2. As cathode utilization increases, in-flow rate decreases and ORR gain increases remarkably near the dead end of stack. This is because liquid water accumulates in the flow channel and the GDL.

In addition, the performance of full-scale PEFC stack for automobiles under various operating conditions will also be discussed in this meeting. 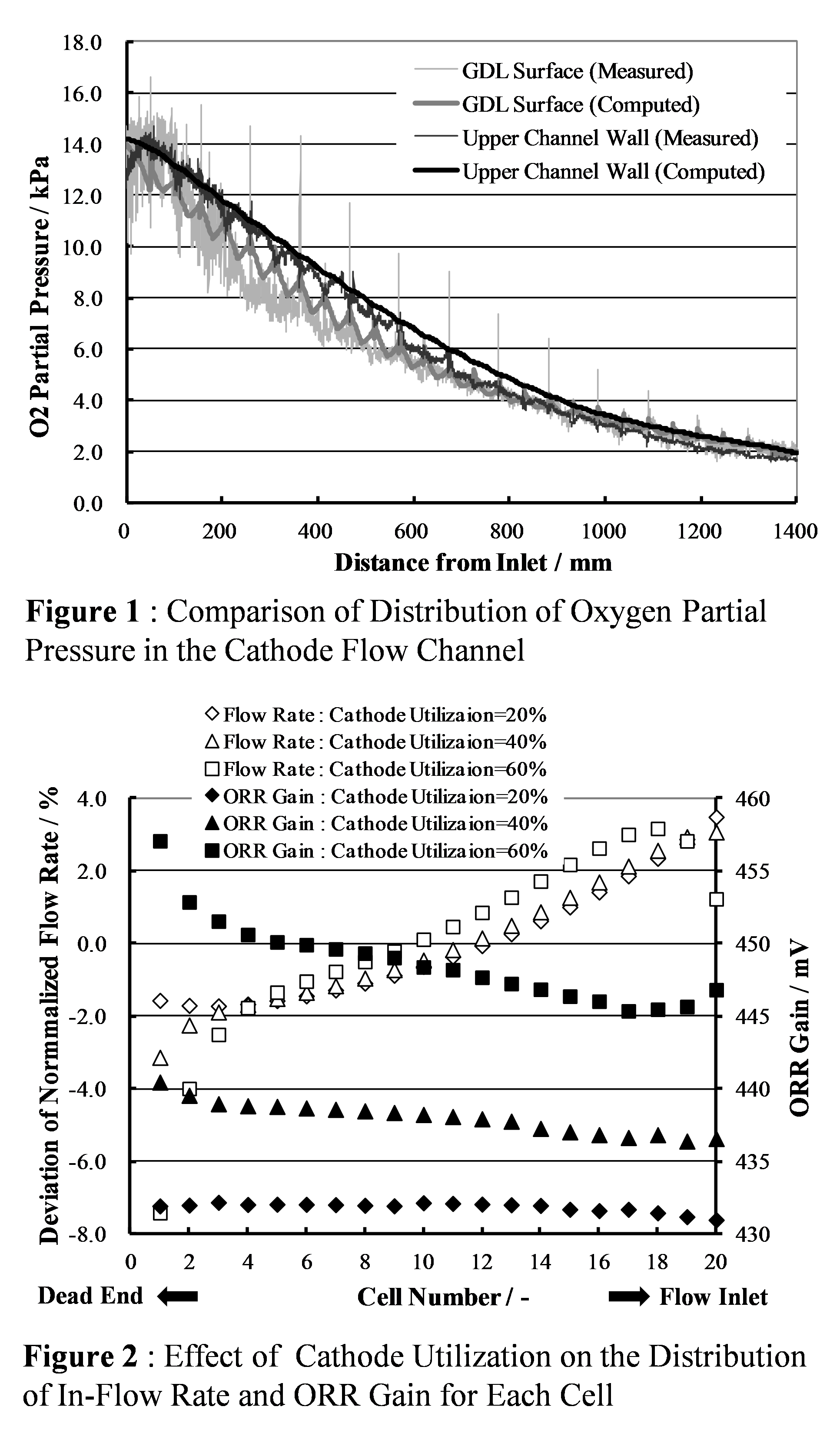