Sunrise, 2nd Floor, Jupiter 1 & 2 (Moon Palace Resort)
R. O. Stroman (Naval Research Laboratory) and G. S. Jackson (Colorado School of Mines)
Hydrogen peroxide – direct borohydride fuel cells (H2O2-DBFCs) have high theoretical energy density and cell voltage [1-3], yet these desirable characteristics have not been demonstrated in a practical system.  Parasitic chemical reactions competing with the desired electrochemical reactions are partly to blame [4].  Efforts to improve H2O2-DBFC performance have been hindered by its complexity; the reactions have many intermediate steps and pathways that are difficult to resolve experimentally [5, 6].  Furthermore, the relative rates of electrode reactions are influenced by transport in the reactant flow channels, where advection, diffusion, and migration occur [7].  A numerical model can make the complexity manageable and offer new insights by revealing relationships that are difficult to measure.  To this end, a H2O2-DBFC model has been developed and calibrated to experiments with a single-cell H2O2-DBFC.  The calibrated model was used to investigate the relationships between transport in the flow channels, parasitic side reactions, and DBFC performance.

In the H2O2-DBFC shown in Fig. 1, a Nafion 117 membrane separates parallel flow channels.  The channel walls are graphite electrodes coated with electro-deposited catalysts.  Fuel (1-50 mM NaBH4 / 2 M NaOH) is oxidized at the Au anode and oxidizer (10-40 mM H2O2 / 1 M H2SO4) is reduced at the Pd:Ir cathode, while Na+ and H2O cross the membrane.

The steady-state finite-difference model includes diffusion, migration, and advection in the flow channels, transport across the membrane, multiple charge transfer reactions at each electrode to yield mixed potentials, and chemical parasitic reactions at each electrode.  It is formulated in MATLAB and solved by a modified Newton solver in SUNDIALS.

Model features were chosen to reflect experimental observations.  For example, experiments showed that low cathode potential caused by oxidizer-lean stoichiometry can lead to H+ reduction at the cathode, therefore this reaction was included in the model.  The model was calibrated to experiments by fitting predicted polarization curves to measured curves.  Electrode reaction rates were modeled with global expressions that summarized many intermediate steps, and the fitted parameters were the rate constants in those global expressions.  Predicted vs. measured polarization curve comparisons showed good agreement (R2 ≥ 0.920) over the fuel cell operating space.  The predicted and measured limiting current densities agreed, indicating transport was modeled accurately.

Results from the calibrated model show compact concentration boundary layers in both channels, which limit reactant utilization and current density.  Transport limits are most pronounced at the cathode because BH4- has higher diffusivity than H2O2, BH4- transport is aided by migration, and BH4- can provide up to 8e- while H2O2 only consumes up to 2e-.  Decreasing inlet concentrations, flow rates, and cell voltage result in lower losses to parasitic side reactions as these changes decrease reactant concentrations near the electrodes, which favors charge transfer reactions.  Peak conversion efficiency coincides with peak power density because thermodynamic efficiency and parasitic reaction rates both decrease (relative to charge transfer reaction rates) with increasing current density.

This work shows that advection, migration and diffusion must be included in H2O2-DBFC models, and that global reactions are sufficient to capture the essential features of complex H2O2-DBFC reactions. 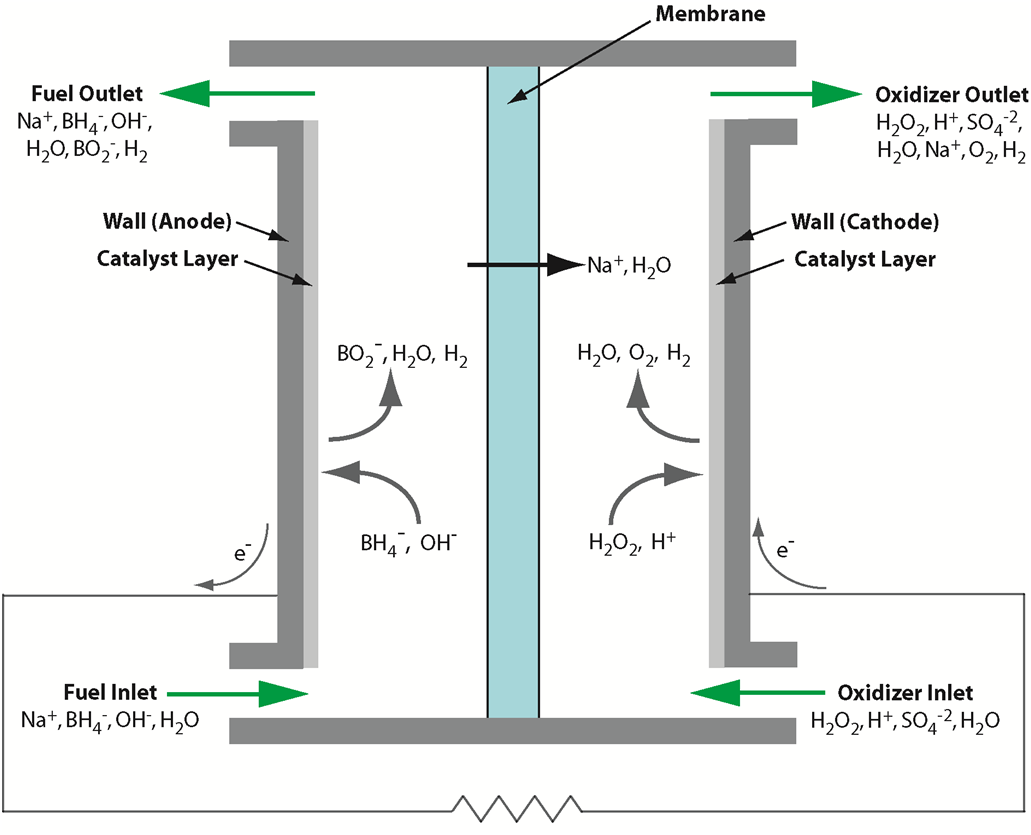