Expo Center, 1st Floor, Center and Right Foyers (Moon Palace Resort)
D. S. Maltsev, V. A. Volkovich, E. N. Vladykin, and B. D. Vasin (Ural Federal University)
Pyroelectrochemical methods are considered as prospective technique for reprocessing spent nuclear fuels (SNF).  These methods have a number of obvious advantages in comparison with the existing aqueous extraction processes.  The advantages include significantly lower volumes of liquid radioactive wastes, high radiation stability of alkali chlorides used as working media, absence of neutron moderators.  The eutectic mixture of lithium, potassium and sodium chlorides is one of possible low melting solvents  (Tf= 529 K) that can be employed for practical realization of the process.  However, there is no information concerning uranium behavior and properties in this melt.  In the present work we studied the behavior and determined main electrochemical and thermodynamic properties of uranium in LiCl-KCl-CsCl eutectic melt.  The measurements were performed between 573–1073 K employing potentiometry, chronopotentiometry and cyclic voltammetry.

Uranium formal standard electrode potentials in LiCl-KCl-CsCl eutectic were determined using electromotive force method.  E*U(III)/U(0)linearly increases with temperature and between 576-1067 K can be described by the following equation:

From the results of the electrochemical measurements the Gibbs free energy change of the formation of uranium trichloride in LiCl-KCl-CsCl melt at 576-1067 K was calculated:

The results (Е*U(III)/U(0), ΔG*UCl3) obtained in the present work for LiCl-KCl-CsCl melt are in a good agreement with the available literature data for the melts of other cationic composition, Fig. 1.

Uranium (IV)/(III) electrochemical reduction was studied using cyclic voltammetry and chronopotentiometry.  Examples of the experimental results are shown in Figs 2 and 3.  Analysis of the cyclic voltammograms showed that U(IV) → U(III) reduction is a reversible one-electron diffusion controlled process, and this conclusion was confirmed by chronopotentiometric data.  The diffusion coefficients of U(III) and U(IV) ions were obtained using both techniques, Fig.4-5, and they are satisfactorily described by the equations [3-6]: 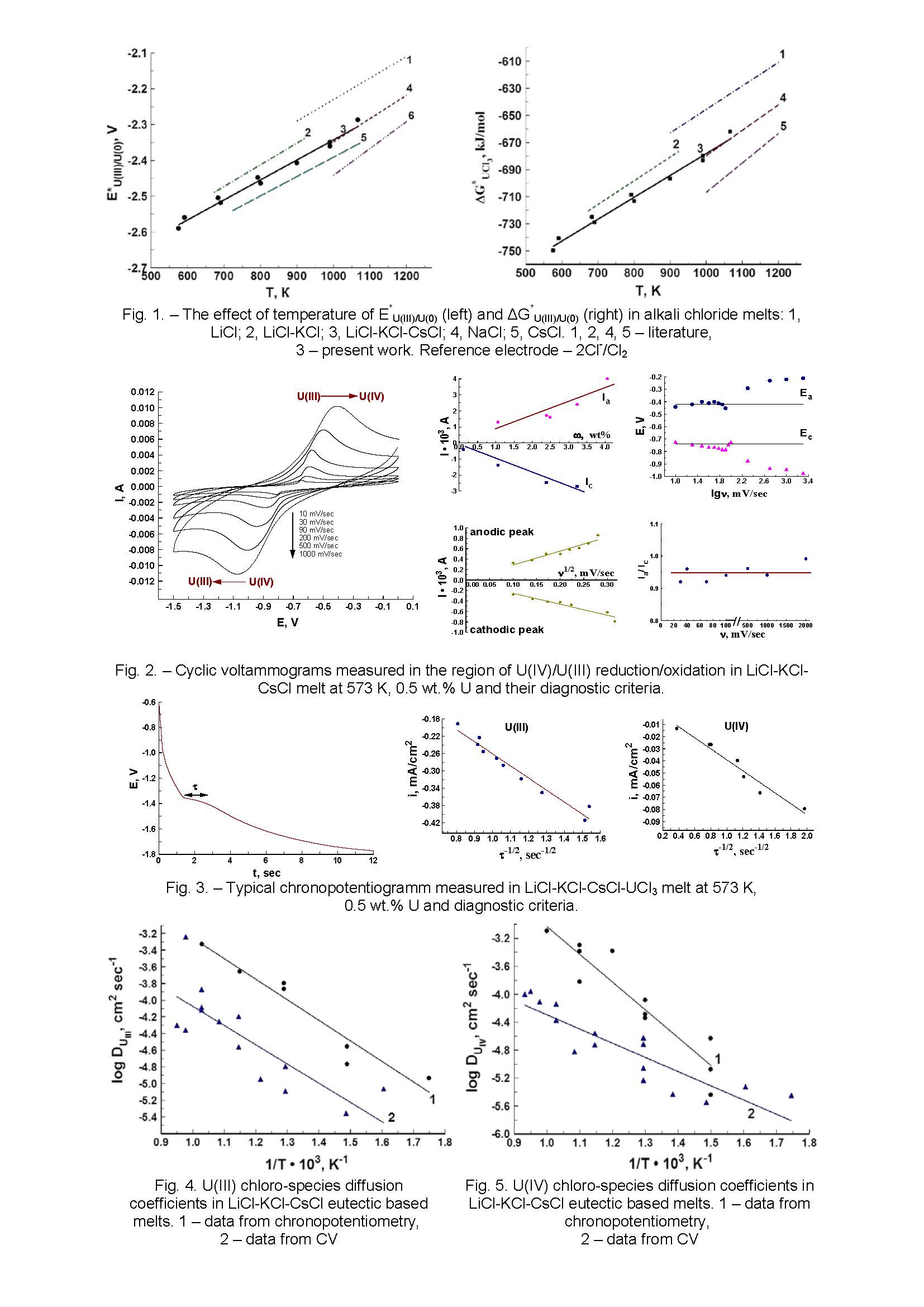