Core/shell structured catalyst is a promising candidate for the decrease and it has been reported that ORR activity of the Pt shell can be enhanced with Pd core [1]. Recently, we have reported that the ORR activity of carbon supported Pd core/Pt shell structured catalyst (Pt/Pd/C) is improved after an accelerated durability test (ADT, 0.6-1.0 V vs. RHE at 80°C, 10,000 cycles) [2]. Morphology of the catalyst changed into a spherical shape and more than 50 % of the Pd core dissolved out after the ADT, which are considered to be important factors for the improvement of the ORR activity. However, since the Pd is also an expensive precious metal, inexpensive alternatives to the Pd core are the key for further cost reduction of the PEFCs. We selected Ag as the alternative, because it has a redox potential close to that of Pd in addition to its lower material cost. However, since Ag has the lowest melting point in precious metals, it is difficult to synthesize fine size Ag core. In this study, carbon supported AgPt alloyed catalyst (AgPt/C) was synthesized to obtain AgPt NP with a size less than 5 nm. Change in the ORR activity of the AgPt/C alloy catalyst with the ADT was studied.

The C17H35COOAg and Pt(acac)2 were dissolved into dibenzyl ether at 80°C and oleylamine (OAm) was added as a stabilizer. The solution was heated to 180°C under N2 atmosphere and kept for 1 h while stirring [3]. The AgPt NPs were collected by centrifugation and washed with EtOH. The AgPt NPs were re-dispersed in n-hexane and stirred with a carbon support (Ketjen black EC300J) to obtained the AgPt/C catalyst. The AgPt/C catalyst was heat-treated at 400°C under 15 % H2/Ar for 1 h to remove OAm.

The composition of an as-made AgPt/C catalyst was Ag64Pt36 (in at.%) and the mean diameter was 3.6 nm. The mean diameter of the catalyst slightly increased to 4.7 nm after heat treatment at 400°C. XRD patterns of the AgPt/C catalysts are depicted in Fig. 1. The (220) diffraction showed an asymmetry peak with a swelling toward higher diffraction angle, suggesting the presence of Pt-rich portions in the AgPt NPs. Ag has a lower surface energy (1.3 J/m2) than that of Pt (2.5 J/m2), which could cause surface segregation of Ag after the heat treatment. CVs of the AgPt/C catalyst are demonstrated in Fig. 2.  The Ag oxidation wave is observed at ca. 0.7 V in the first cycle. However, the oxidation wave disappeared and HUPDwave increased after repeated CV cycles.  These fact indicate that Ag existed in the topmost surface of the as-made AgPt NPs and that Pt-rich shell was formed due to dissolution of the Ag after the repeated CV cycles. 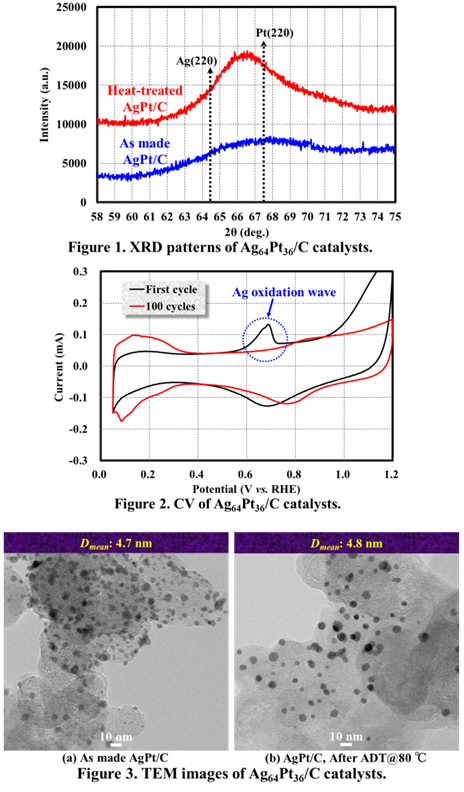