The usage of the expensive Pt cathode catalyst in PEFCs must be reduced for their worldwide commercialization. Core-shell structured catalyst, in which Pt monolayer (PtML) is formed on the other metal core surface, is one of the key technologies for the reduction of the Pt usage. Furthermore, it has been shown that the ORR activity of PtML formed on Pd core NPs is enhanced [1, 2]. Conventionally, the PtML has been formed on a core surface through Cu under potential deposition (Cu-UPD) followed by Pt replacement reaction. However, the Cu-UPD requires a precise potential control and weight of treated core on glassy carbon (GC) electrode is extremely small (several tens mg). Recently, we have developed a new method for the Pt shell formation which needs no precise potential control and is suitable for scale-up synthesis toward the core-shell structured catalyst (modified Cu-UPD/Pt replacement method [3]). We further demonstrated that the ORR mass activity of a carbon supported Pd core/Pt shell structured catalyst (Pt/Pd/C) synthesized by the modified Cu-UPD/Pt replacement method is drastically enhanced with an accelerated durability test (ADT) performed at 80°C [3]. TEM observation revealed that the mean diameter of the catalyst decreased and the morphology changed into a spherical shape after the ADT associated with oxidative dissolution of the Pd core. It was presumed that the ORR activity enhancement after the ADT was caused by a rearrangement of the surface Pt atoms and a decrease in Pt atoms with lower coordination numbers. In this study, we tried to correlate the change in ORR activity with the surface micro-structural change in the Pt shell using Bi3+cation as a probe, which specifically is adsorbed on the Pt (111) face [4].

Pt/Pd/C catalyst was synthesized with the modified Cu-UPD/Pt replacement method [3]. Pd/C core and Pt/Pd/C catalyst were characterized with TG, XRF, XRD, TEM and CV. ORR activity of the catalyst was measured by RDE technique in O2 saturated 0.1 M HClO4 at 25°C. ADT was performed using a rectangular wave potential cycling (0.6 V (3 s)-1.0 V (3 s) vs. RHE) in Ar saturated 0.1 M HClO4 at 80°C for 10,000 cycles. The Pt has a fcc crystallographic structure and the (111) face is energetically the most stable. Since Bi3+ is specifically adsorbed on the (111) face of Pt [4], we selected the cation as a probe for an evaluation of the (111) ratio on the surface. A GC electrode casted with the Pt/Pd/C catalyst was immersed into 0.05 M H2SO4 containing 0.5 mM Bi2O3 to be adsorbed. After washing the GC electrode with DI water, CV was recorded in Ar saturated 0.05 M H2SO4 at 25°C. The amount of the adsorbed Bi3+was converted into the surface Pt atomic ratio of the (111) face [4].

Table 1 summarizes the ratio of the Pt(111) area to the total one for each catalyst. The ratio was calculated using the Bi3+ adsorption and HUPDwaves [4]. It should be noted that the surface Pt(111) ratio on the Pt/Pd/C catalyst increased after the ADT. Although the decrease in the ratio for the Pt/C catalyst after the ADT has not been clarified, it is strongly suggested that the surface Pt rearrangement during the ADT influences the ORR activity of the Pt/C and Pt/Pd/C catalysts. 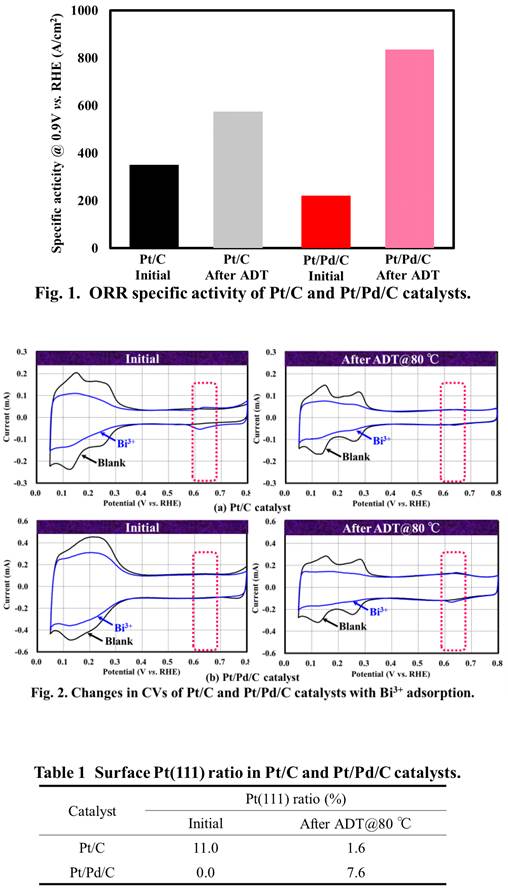