Sunrise, 2nd Floor, Jupiter 1 & 2 (Moon Palace Resort)
A. Tavassoli, C. Lim (Simon Fraser University), J. Kolodziej, M. Lauritzen, S. Knights (Ballard Power Systems), G. Wang, and E. Kjeang (Simon Fraser University)
Membrane degradation is a key lifetime limiting factor in polymer electrolyte membrane fuel cells (PEMFCs). Observation of microstructure evolution in aged membrane electrode assemblies using scanning and transmission electron microscopy has shown a non-uniform degradation across the membrane surface [1]. It is known that under typical automotive operating conditions of PEMFCs, the membrane functional properties and stability decrease due to chemical and mechanical degradation mechanisms [2-3]. However, it is largely unknown why some distinct regions of the membrane experience remarkably more severe degradation, resulting in local thinning and pinhole formation and ultimately fuel cell failure due to significant hydrogen leaks. On this account, several studies have been performed on performance and failure analysis of PEMFCs due to pinhole formation [1, 4-5]; however, very limited knowledge is available on possible causes and initiators of this local phenomenon. In the present work, three new hypotheses are introduced, followed by an extensive experimental validation and analysis, with the aim of understanding the fundamental mechanism of this localized process.

A comprehensive review of historical membrane failure analysis data from field operated Ballard MEAs was conducted to determine possible causes of localized membrane degradation and correlations with the MEA structure.  Based on this review, it was proposed that catalyst layer delamination and cracks may play a significant role in accelerating the membrane degradation in PEMFCs. Therefore, customized MEAs were designed and fabricated in order to artificially create these two catalyst layer related defects. MEAs were tested under two different in-situ accelerated stress test conditions and extensive post mortem analysis was done on the end-of-life samples with the aim of developing an improved understanding of the relationships between pre-existing catalyst layer delamination and cracks and the localized membrane degradation process. Two possible cases of catalyst layer delamination were simulated, with and without a thin coating of Pt particles on the membrane surface. Figure 1 shows a cross sectional SEM image of the customized MEA. Delamination was simulated by precisely placing a small, thin, highly porous and hydrophilic polycarbonate film between the membrane and the catalyst layer. Also, Figure 2 shows the manipulated MEA with cracks in the cathode catalyst layer.

The third hypotheses considered in this study was pinhole formation generated by local sources of Fenton’s reagents. In order to investigate this hypothesis, Iron oxide particles (Iron II and III oxides) were inserted at the membrane-catalyst layer interface. Figure 3 shows a cross sectional SEM image of this setup.

The observations suggested a significant accelerating effect for iron contamination on the chemical membrane degradation process in a global nature, leading to remarkably shorter lifetimes, but dismissed the local traces of iron oxide as the local initiators or accelerators of this phenomenon. Studying the potential effects of catalyst layer delamination revealed that having this defect on the anode side can lead to an increasingly thinned membrane, while the same anomaly, if placed at the cathode catalyst-membrane interface, has a negligible effect on the rate of membrane thinning under identical operating conditions. Moreover, a substantial mitigating effect for platinum remainders on the site of delamination was observed in both tests. This was in agreement with comparable observations made by the same group [6]. In the case of artificial catalyst layer cracks, it was verified that anode and cathode cracks had no significant impact on local membrane degradation phenomena. In sum, anode delamination was found to be the most significant MEA feature resulting in accelerated local membrane thinning, while Fenton’s reagents were shown to accelerate global membrane thinning. The anode catalyst layer and its interaction with the membrane may warrant further research to elucidate the complex, local membrane degradation phenomena.

This research was supported by Ballard Power Systems and the Natural Sciences and Engineering Research Council of Canada through an Automotive Partnership Canada (APC) grant. Special thanks and appreciations also go to Dr. Lida Ghassemzadeh, for her persistent and generous support during this project. 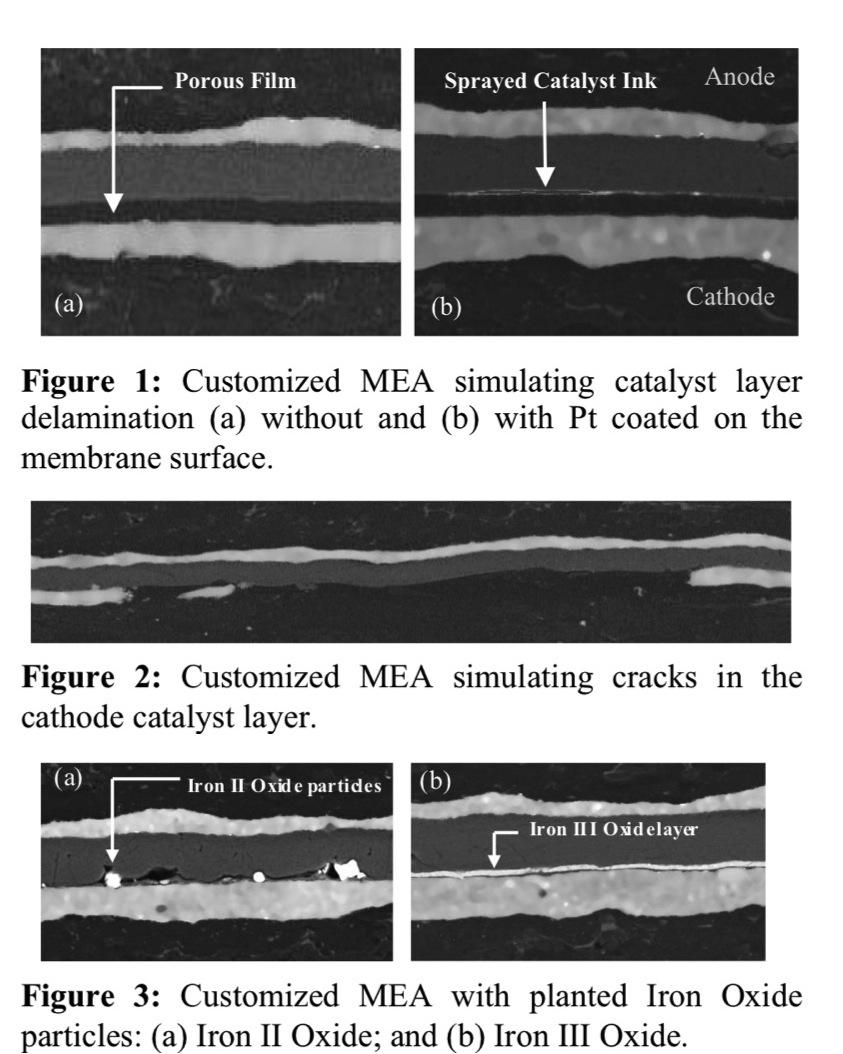