The addition of Ce3+ by ion exchange has greatly improved the durability of PEFCs3. The cerium cations decompose the free radical species at high rates, thus limiting membrane damage and carbon support oxidation. An alternative approach is the addition of cerium oxide nanoparticles as free radical scavengers. The surfaces of CeO2 nanoparticles contain appreciable concentrations of Ce3+that may act as catalytic sites for free radical decomposition. However little is known about the effects of particle size and doping on the free radical scavenging rates, and the selectivity towards peroxide decomposition versus secondary free radical generation has not been previously studied.

Ceria and doped ceria (Gd, Pr, Zr) nanoparticles of ~ 5-40 nm crystallite sizes were synthesized and evaluated for their activity and selectivity towards hydrogen peroxide decomposition, Figure 1, and were incorporated into the cathode catalyst layer to evaluate the effect of radical decomposition during fuel cell operation. Accelerated stress tests with fuel cells operating at 80°C and 30% relative humidity of the inlet gases  were used to increase degradation of the fuel cell membrane to simulate long-term operation by accelerating free radical generation. Open circuit voltage (OCV), hydrogen crossover, and the fluorine emission rate (FER) from both the anode and cathode exhaust gases were used to quantify the rate of degradation of the fuel cell membrane electrode assembly (MEA) among the different types of fuel cells: those with cerium cations, those with cerium oxide, and those without cerium or ceria stabilizers.  Scanning electron microscopy images of the tested membranes  were used to determine the extent of thinning of the anode side of the MEA relative to the cathode side of the MEA to independently verify degradation by free radical degradation. The nanoparticle additives were shown to decompose peroxide and in some cases, improve ionomer durability. The catalytic activity and reaction pathway of cerium oxide towards hydrogen peroxide decomposition were influenced by particle size, dopant and the ratio of the Ce+3/Ce+4 sites on the surface. The size and doping of ceria nanoparticles are shown to play an important role on their ability to improve membrane durability. Additionally, the dissolution of ceria nanoparticles and the migration of cerium ions within the membrane electrode assemblies (MEAs) after accelerated stress testing were studied using spatially resolved X-Ray Fluorescence. The Ce cations were very mobile within fuel cells and migration across the MEAs was observed in the test cells in very short time periods4. 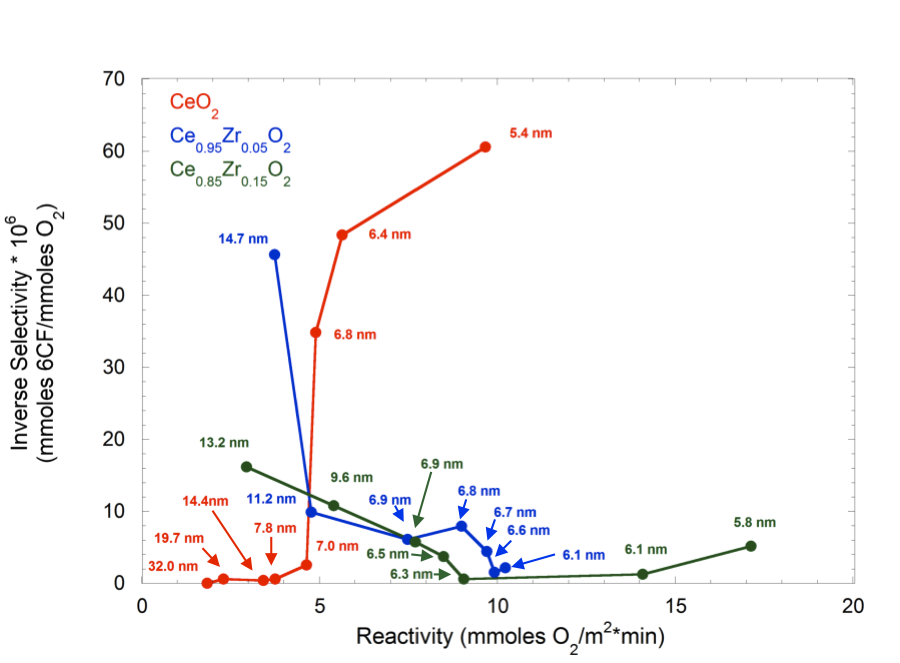