Expo Center, 1st Floor, Universal 18 (Moon Palace Resort)
H. J. Kwon, J. Jang, H. Kang (University of California), S. Kim (Kyung Hee University), V. Subramanian, and C. P. Grigoropoulos (University of California)
Two-dimensional (2D) materials have been giving a chance to advance high performance electronic technology for next generation nanoelectronics devices. Among 2D materials, molybdenum disulfide (MoS2) is drawing attention due to its relative large bandgap (1.3-1.8 eV) and the 50~200 cm2/V·S range of high carrier mobility at room temperature. In the few early report, multilayer MoS2 could have been much better than single-layer MoS2 because it has larger density of state (DOS) and helps to create multiple conducting channels by field effect, which will lead to boost the current drive of TFTs.

At realistic operating temperatures, however, the carrier transport mechanism of these 2D layered MoS2 FETs has not yet been intensively explored for use in electronics. Therefore, we investigate carrier transport and the impact of the operating ambient conditions on back-gated multilayer MoS2 field-effect transistors with a thickness of ~50 nm at their realistic working temperatures and under different ambient conditions (in air and in a vacuum of ~10-5 Torr). Moreover, we examine the quality of the device interface and an energy distribution of carrier trapping/scattering sites through the low-frequency noise (LFN) measurement.

Fig. 2(a) shows that VTH shifts toward the negative direction as the temperature increases. This behavior is observed due to an increase in thermally generated carriers, resulting in a shift in the Fermi level in the semiconductor. Additionally, VTH was higher in air than in a vacuum. One possible explanation is that the oxygen and water molecules on the surface of MoS2 semiconductors could be adsorbed from the ambient air, and they could trap the charge carriers from the conduction band. This could make depleted channels and induce a positive threshold voltage shift. Also, the chemisorption on the MoS2 flake created defects and associated increased scattering which causes a reduction in μeff, unlike in a vacuum (Fig. 2(b)). However, thick multilayer MoS2 was less affected by the ambient conditions, because the thickness of the MoS2 layers suppressed interactions with the underlying channel. This fact was also supported negligible effects of ambient conditions on interface quality as determined by sub-threshold slope values (Fig. 2(a)).

In Fig. 3 (a), obtained exponent values (γ) from low-frequency noise analysis, 1/fγ, exhibited the increase of γ­ at low gate bias range due to active slow traps. And the slow traps were filled and thus γ decreased and saturated to near 1 (0.95) as VG increased. In addition, the Hooge’s parameter, αH, was extremely large in the subthreshold region and drastically decreased as the gate bias increased until it matched Vth. This result also supports that the amount of active traps which cause the carrier number fluctuation decreases more significantly below Vth since the increased gate bias fills traps; it agrees with the change of the exponent value aforementioned.

It is also interesting fact that the Hooge’s parameter (measured in ambient conditions) during fully ON regime is on the order of 10-2. This value is comparable to that observed in single-layer MoS2 FETs measured under vacuum conditions. This result provides multilayer structures more robust than single-layer for the effect of surface adsorbates in air and is consistent with our previous statement mentioned above. 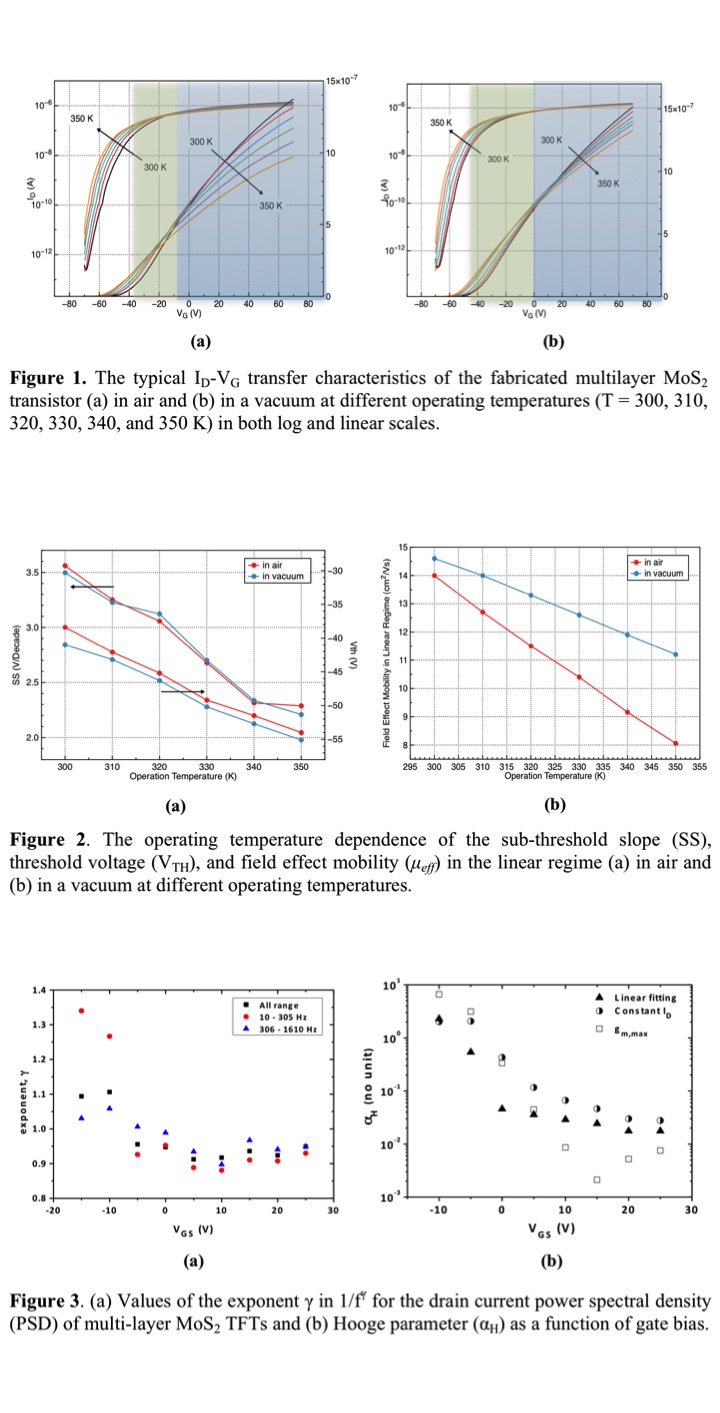