Lithium sulfide (Li2S) is one of the promising cathode active materials for high-energy rechargeable lithium batteries, because it has a high theoretical capacity (ca. 1170 mAhg-1) and has an advantage that a variety of anode materials without lithium sources are applicable in the practical battery system [1]. However, this material is both electronically and ionically resistive, which gives rise to low active material utilization in the cells [2]. Several attempts have been performed to enhance the conductivity of Li2S, such as forming composites with several metals (Li2S-Fe, Li2S-Cu) [1,2] or carbon [3-5]. Recently, we have tried to prepare the composite with FeS2 (Li2S : FeS2 = 1 : 1 molar ratio) using the spark-plasma-sintering (SPS) process and found that the cells showed the initial charge capacity of ca. 330 mAhg-1 [6]. For improving the charge capacity, preparation of the composite with Li2S-rich composition is required.

In the present work, we tried to prepare the Li2S-FeSx-C (x = 1, 2) composites with a Li2S : FeSx = 4 : 1 molar ratio using the combination processes of the SPS and the mechanical milling, and examined their electrochemical properties.

Li2S and FeS2 (or FeS) with a molar ratio of 4 : 1 were mixed thoroughly, and the mixture was then treated by the SPS process [6] at 600oC. The resulting pellet was ground and mixed with carbon (acetylene black) powder with a weight ratio of Li2S-FeSx : C = 9 : 1, and then it was mechanically milled for 8 h to yield the Li2S-FeSx-C composites. All the procedures were carried out in an argon atmosphere, because Li2S is very sensitive to atmospheric moisture.

The obtained composite samples were characterized by XRD, as well as Fe and S K-edge XAFS measurements. Electrochemical lithium insertion / extraction reactions were carried out using lithium coin-type cells with 1M LiPF6 / (EC + DMC) electrolyte at a current density of 46.7 mAg-1 (corresponding to 0.04C) initially with charging. For improving the electrochemical performances, we applied pre-cycling treatment to the present Li2S-FeSx-C composite sample cells, whereby cycle capability of some oxide cathode active materials (such as Li(NiCoMn)O2) was successfully improved [7].

The obtained Li2S-FeSx-C composite samples were black in color, and their XRD patterns showed that they consisted of Li2S (antifluorite structure) with low crystallinity. The atomic ratio, estimated by ICP and atomic absorption spectroscopy, was Li : Fe : S = 7.8 : 1.0 : 4.8 for the Li2S-FeSx-C composite sample with Li2S : FeS = 1 : 4. Since the initial composition was Li : Fe : S = 8 : 1 : 5, this result indicates that negligibly slight amounts of Li and S (ca. 3 – 4%) were lost during the SPS and the following milling processes.

This work was financially supported by R&D project for lithium batteries (RISING Project) by METI and NEDO. 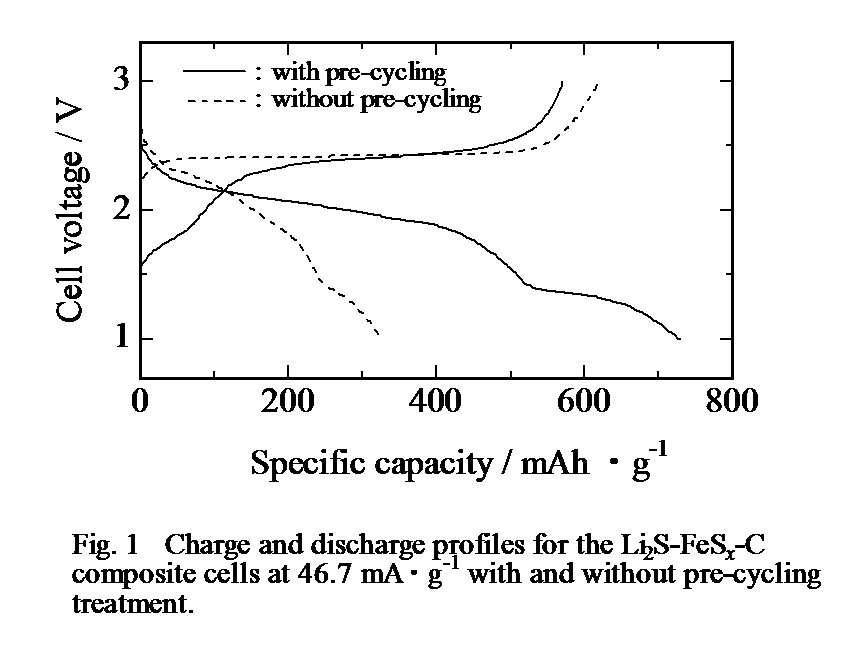