In this contribution we report use of Silicalite-1 zeolite as an additive in the cathode composite in the Li-S batteries. Silicate-1 is a microporous, silica-based molecular sieve with a MFI topology of the tetrahedral framework. Incorporation of transition metals into their framework generates different types of catalytically active sites. MnS-1 (manganese silicalite-1) nanosized crystals (arround 200 nm) have been synthesized under classical hydrothermal procedure and showed Mn3+ incorporated into the silicalite-1 framework as framework manganese. By contrast, MnS-1 synthesised under microwave hydrothermal procedure resulted in incorporation of Mn3+ into the silicalite-1 framework as extra-framework manganese in forms of manganese oxide nano-particles [5-6].

Galvanostatic cycling showed good capacity retention of the Li-S cells through the use of zeolite additives as polysulphide reservoirs. We examined the role of silica surface, pore absorption and manganese oxide adsorption. MnS-1 crystals with a small amount of nano-sized manganese oxide particles in the structure appear effective at retaining the soluble polysulphides at the cathode and are limiting the fraction that takes part in the sulphur shuttle mechanism. We assume that, most likely, additionally to the zeolites, the nano-sized manganese oxide serves as an adsorbent of the polysulphides in the cathode material. By utilizing 9 wt.% MnS-1 in cathode material we achieved a higher specific capacity and cycle efficiency in comparison with cathode material without zeolite additive and with 9 wt.% of mesoporous SBA-15 additive. The possible mechanism(s) will be discussed based on results obtained by in operando analytical techniques developed in our lab [7,8].

This research has received founding from the Slovenian Research Agency and the European Union Seventh Framework Programme under grant agreement No. 314515 (EUROLIS). 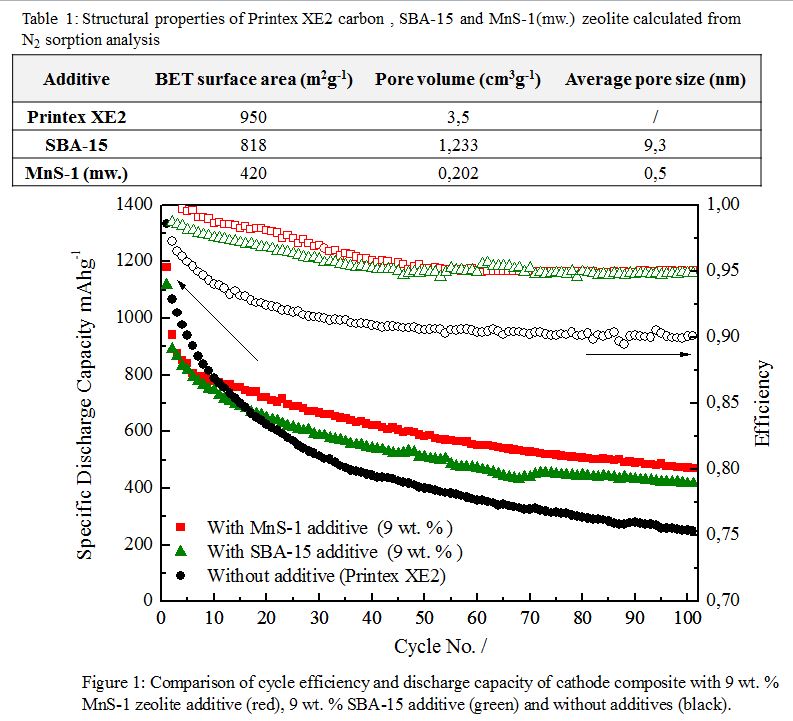