Sunrise, 2nd Floor, Galactic Ballroom 1 (Moon Palace Resort)
F. Fan, W. Woodford, M. Pan, Z. Li, K. C. Smith, W. C. Carter, and Y. M. Chiang (Massachusetts Institute of Technology)
We recently demonstrated that the high solubility of polysulfides in nonaqueous electrolytes can be exploited to make a high energy density lithium-sulfur flow battery with low storage cost1–3. Here we used a new approach, whereby percolating networks of nanoscale conductor particles (in this case carbon black) are incorporated within the electrode forming an embedded current collector which distributes electrochemical activity throughout the volume of the flow electrode, rather than being confined to the surfaces of stationary current collectors. Compared to the traditional approach, this architecture enables significantly higher capacity (~1200 mAh / g S) and reversibility by allowing cycling of polysulfide solutions (2.0-2.5V) into the precipitation regime (~2V), where discharge proceeds via precipitation of insoluble Li2S, as shown in Figure 1.

The majority of the available capacity of this battery lies in this precipitation regime. Therefore, understanding the kinetics of the precipitation process is essential to improving the reversibility and rate capability of lithium-sulfur flow batteries. Here, we will discuss the nucleation and growth kinetics of the precipitates on various conductive substrates, including various carbon surfaces and conducting oxides. Moreover, we will discuss the effects of cycling conditions and substrate on the morphology of the precipitates, examples of which are shown in Figure 2. The precipitation of lithium sulfide has long been a challenge for lithium-sulfur batteries due to its low electronic conductivity4,5, so controlling the morphology of precipitates can reduce losses due to Ohmic polarization.

This work was supported as part of the Joint Center for Energy Storage Research, an Energy Innovation Hub funded by the U.S. Department of Energy, Office of Science, Basic Energy Sciences.

Figure 2. Scanning electron microscope image of lithium sulfide precipitates on a network of multi-walled carbon nanotubes after first discharge of a stationary lithium polysulfide cell at C/4 rate. On the circled nanotube, lithium sulfide particles merge together to form a conformal coating. 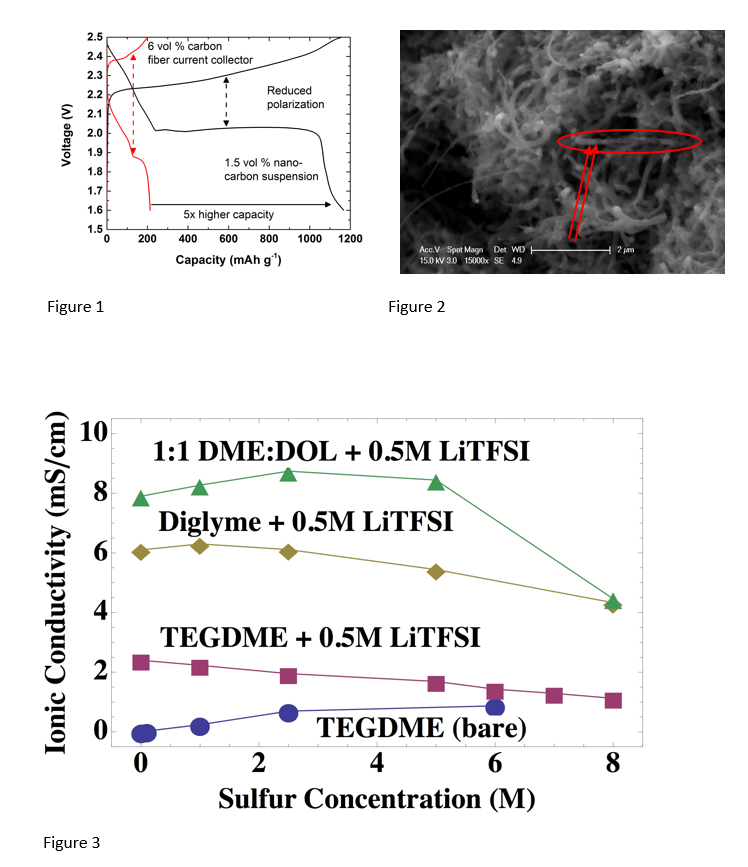