In the present study, we have successfully synthesized single-phase sample of Li2Ti3O7 with the NaLiTi3O7-type structure and determined its crystal structure by Rietveld analysis.  Furthermore, the Li-ion insertion properties of this compound have been clarified for the first time.

The precursor NaLiTi3O7 was first prepared by a conventional solid state reaction by using a method similar to that reported previously [3].  A mixture of Na2CO3 (99.9% pure), Li2CO3 (99.99% pure) and TiO2 (99.99% pure) in a molar ratio of 1.01:1.03:3 was heated at 950°C for 24 h in air.  Then, the lithiated Li2Ti3O7 samples were prepared from NaLiTi3O7 via ion exchange at a low temperature.  Sodium/lithium ion exchange experiments were performed using the molten salt of LiNO3.  Ion exchange reaction was performed at 400°C for 6h in air.  After heat treatment, the reaction mixture was washed with ethanol and then dried at 80°C for 1 day in air.  Further Li-ion exchange treatment was accomplished by heating the as prepared Li2Ti3O7 in molten LiNO3at 380°C for 6 h in air.

Electrochemical lithium insertion/extraction experiments were performed using lithium coin-type cells (CR2032-type).  The working electrode were made of 80wt% active materials, 10wt% carbon black (Super-P) as a conductive agent, and 10wt% poly(vinylidene difluoride) as a binder.  Copper foil was used as a current collector, and the area of the electrode was a diameter of 14 mm.  The counter electrode was a Li foil having a diameter of 16 mm.  The separator was a microporous polypropylene sheet.  A solution of 1 M LiPF6 in a 1:2 mixture of ethylene carbonate (EC) and dimethycarbonate (DMC) by volume (Mitsubishi Chemical Co., Ltd.) was used as the electrolyte.  Cells were constructed in a dry room, and electrochemical measurements were carried out with a current density of 10 mA g−1between 0.5 and 2.0 V at 25°C after standing 6h under an open circuit condition.

The electrochemical measurements revealed that the initial Li insertion capacities were 152 mAh g−1 and 243 mAh g−1 for NaLiTi3O7 and Li2Ti3O7, respectively, which were equivalent to 1.62 and 2.45 electron transfer per each formula unit.  In addition, reversible Li-ion insertion and extraction reactions were observed in these samples, although a capacity loss of approximately 50 mAh g−1 and 75 mAh g−1 for the first cycle was observed in NaLiTi3O7 and Li2Ti3O7, respectively.

This work was supported by the “Research and Development Initiative for Scientific Innovation of New Generation Battery (RISING project)” of the New Energy and Industrial Technology Development Organization (NEDO; Japan). 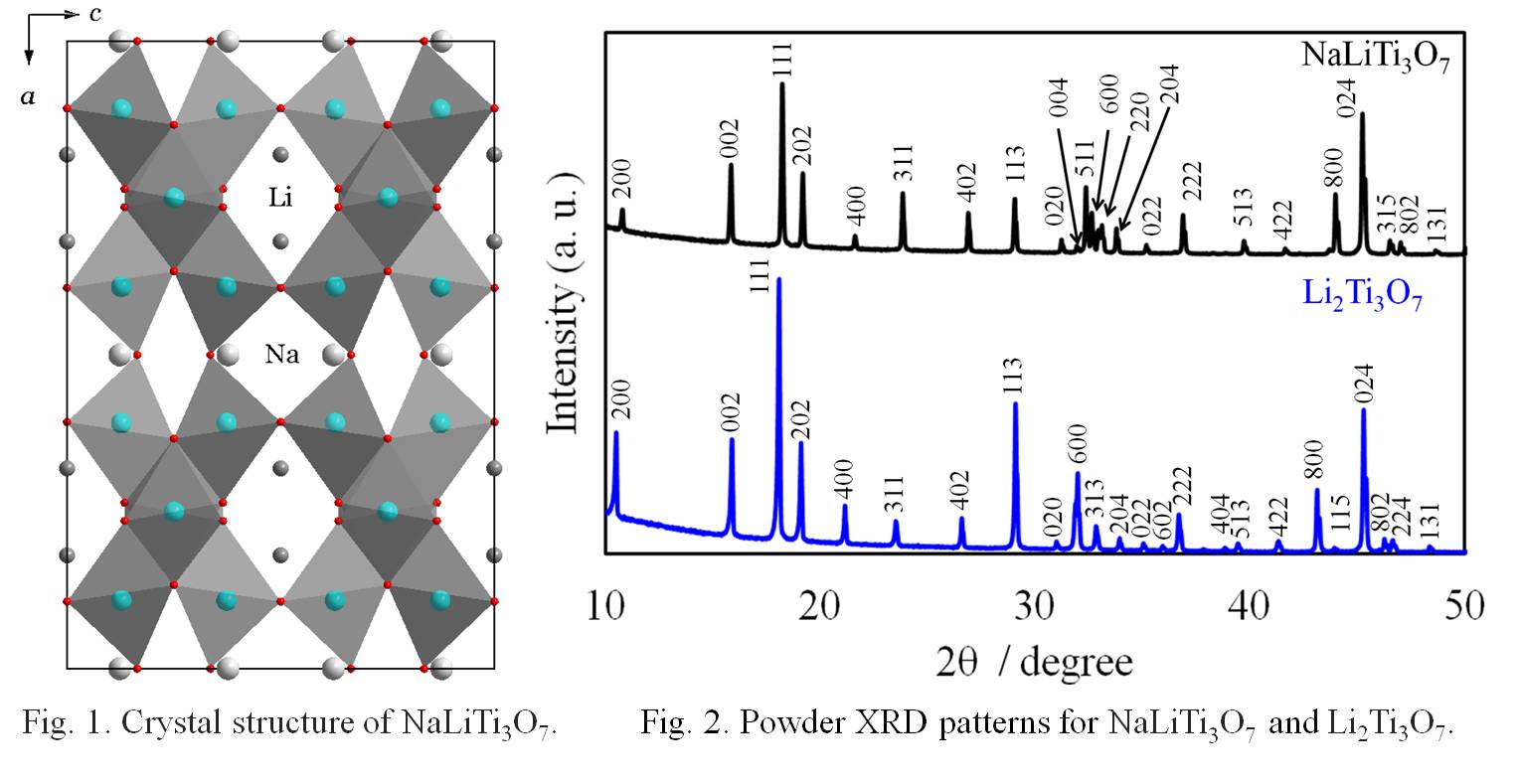