Expo Center, 1st Floor, Center and Right Foyers (Moon Palace Resort)
J. Liu, G. Li, J. Anstrom, S. Brennan (Pennsylvania State University), and H. Fathy (The Pennsylvania State University)
This paper examines the health-conscious optimal control of lithium-ion batteries. The paper focuses specifically on the optimizing battery control policies to minimize solid electrolyte interphase (SEI) layer growth. However, its approach is applicable to other degradation mechanisms. The paper exploits the fact, established by the mathematical control literature1–4, that Fick’s second law of diffusion is differential flat for both linear and nonlinear diffusion problems. Differential flatness only applies to each diffusion medium in the battery separately. In the single particle model (SPM), for instance, each electrode’s diffusion sub-model alone is differential flat. Ensuring differential flatness for the entire battery is a two-step process. First, one must truncate redundant integrators from the two electrodes’ diffusion sub-models. Second, one must then relate the truncated integral state variable to the remaining state variables through an affine transformation. The differential flatness of the resulting battery model makes it possible to solve the health-conscious battery management problem efficiently using pseudospectral methods. This exploitation of the structure (i.e., differential flatness) of lithium-ion battery dynamics for more computationally efficient trajectory optimization is novel and significant. The existing literature already examines the problem of health-conscious optimal battery charging and discharging5,6. However, the optimal control tools used in this literature are not tailored to exploit the structure (e.g., differential flatness) of lithium-ion battery models. This can lead to higher computational burdens compared to the novel and more efficient approach we present here. The approach has the added advantage that it can be used for both offline trajectory optimization and online model-predictive control.

The paper demonstrates the above ideas using the SPM. The optimization problem is formulated by equation [1-6] and the SPM with film growth model. The cost function in Equation [1] aims to track the reference state of charge (SOC)  and at the same time minimize the film growth rate, which is defined by equation [7]-[14] in Ramadass’s paper7. The weight β represents a tradeoff/balance between aggressive charging and battery degradation. Constraints [2-6] place limits on battery charge/discharge current, reflecting battery management hardware capabilities. Furthermore, these constraints limit battery SOC to prevent over-charging and over-discharging. Finally, these constraints also place bounds on battery state variables contributing to damage phenomena such as lithium plating and mechanical degradation. For instance, we bound the concentration gradients in the battery cell and the overpotentials driving the lithium plating side reaction8–10. The optimization approach presented in this paper transforms these equations and constraints from a dynamic programming problem to a nonlinear programming (NLP) problem. Solving this NLP problem using traditional optimization methods leads to a health-conscious battery management policy. The value of this paper lies not in this policy, but rather in the computational efficiency with which it is obtained. Specifically, to the best of the authors’ knowledge, this paper represents the first attempt to exploit lithium-ion battery model structure for more efficient solution of the health-conscious optimal management problem.

The research was funded by ARPA-E AMPED program grant # 0675-1565. The authors gratefully acknowledge this support. 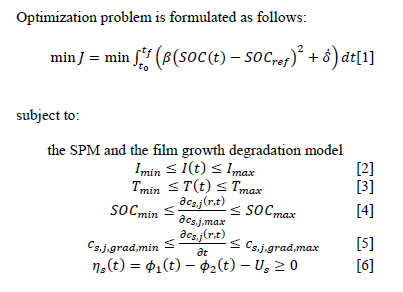