Expo Center, 1st Floor, Center and Right Foyers (Moon Palace Resort)
I. B. Polovov, M. V. Chernyshov, D. A. Shuklin, V. A. Volkovich, O. I. Rebrin, B. D. Vasin (Ural Federal University), and T. R. Griffiths (Trevor Redston Consulting Ltd)
Molten chlorides can be used for niobium electrowinning and electrorefining. Understanding niobium electrochemical properties and speciation in chloride melts is essential for designing or optimizing the industrial electrochemical process. Apart from the technological value, the information on the kinetics of the electrode reactions can also be used for verifying theoretical predictions concerning the nature of the heterophase electrochemical reactions.

The results of spectroelectrochemical experiments showed that the major product of niobium anodic dissolution in chloride melts at current densities up to 40 mA/cm2 were niobium(III) species, NbCl63-. In the potentiostatic regime of anodic dissolution of niobium metal niobium(III) complex ions were formed at potentials below -1.15 V vs.chlorine reference electrode. The polarization curves characterizing the anodic dissolution of niobium consist of three or more waves. The first wave is associated with reaching limiting current density of niobium ionization according to the three-electron scheme. Further increase of applied current leads to the oxidation of Nb(III) to Nb(IV) ions. These conclusions were confirmed by determined values of potentials of niobium or indifferent electrodes in the equilibrium with the melts containing Nb(III) and Nb(IV) ions.

When studying anodic dissolution of niobium we found that at high current densities there is sudden increase of the ohmic part of voltage drop sometime accompanied by increase of the anode potential. As a result stationary and non-stationary polarization dependencies exhibit unstable behavior. This is explained by the salt passivation, SP. The product of the SP of niobium is unstable NbCl4, which decomposes to NbCl3.13 and volatile NbCl5.

The results of electrochemical experiments (PCM, CVA, LVA, CA, CP and SWVA) showed that soluble niobium(V) species were formed during Nb(IV) electrooxidation and represented the highest oxidation state of niobium in NaCl-KCl melts. We noticed that peak potential value (both cathodic and anodic) on CV changes with scan rate, whereas the ip/ν1/2 value remains constant. The formation of Nb(V) species was confirmed by the disappearance of absorption bands in the visible part of the spectrum due to Nb(V) species formation during elecrooxidation of niobium-containing melts at potentials up to -0.5 V. The quasireversibility of Nb4+↔Nb5+reaction was explained by the instability of niobium(V) species.

Niobium(IV) ions were formed when potentiostatic electrolysis of NbCl3-NaCl-KCl melts (prepared by anodic dissolution of niobium metal) was performed at -(1.0÷0.8) V vs.chlorine reference electrode on a glassy-carbon anode, Fig. 1.

The electroreduction of niobium on a tungsten electrode in NbCl3-NaCl-KCl melts at potentials below -1.45 V led to the formation of metallic niobium (Fig. 2), no evidence of any intermediate product formation was obtained.

Linear voltammetry measurements showed that intermediate products can be formed during elecroreduction of NaCl-KCl-NbCln (n=3.8-4.1) melts. Most likely the electroreduction of Nb(IV) results in the formation of niobium(III) ions. The shape of cyclic voltammograms recorded in niobium containing melts depended on the scan rate. Similar sets of cyclic voltammograms were obtained at different temperatures and niobium concentrations. SWVA measurements performed on different electrodes also confirmed that there is more than one step of electroreduction. The obtained results were explained by overlapping of the following electrode reactions: Nb(IV) → Nb(III), Nb(IV) → Nb(0) and Nb(III) → Nb(0). 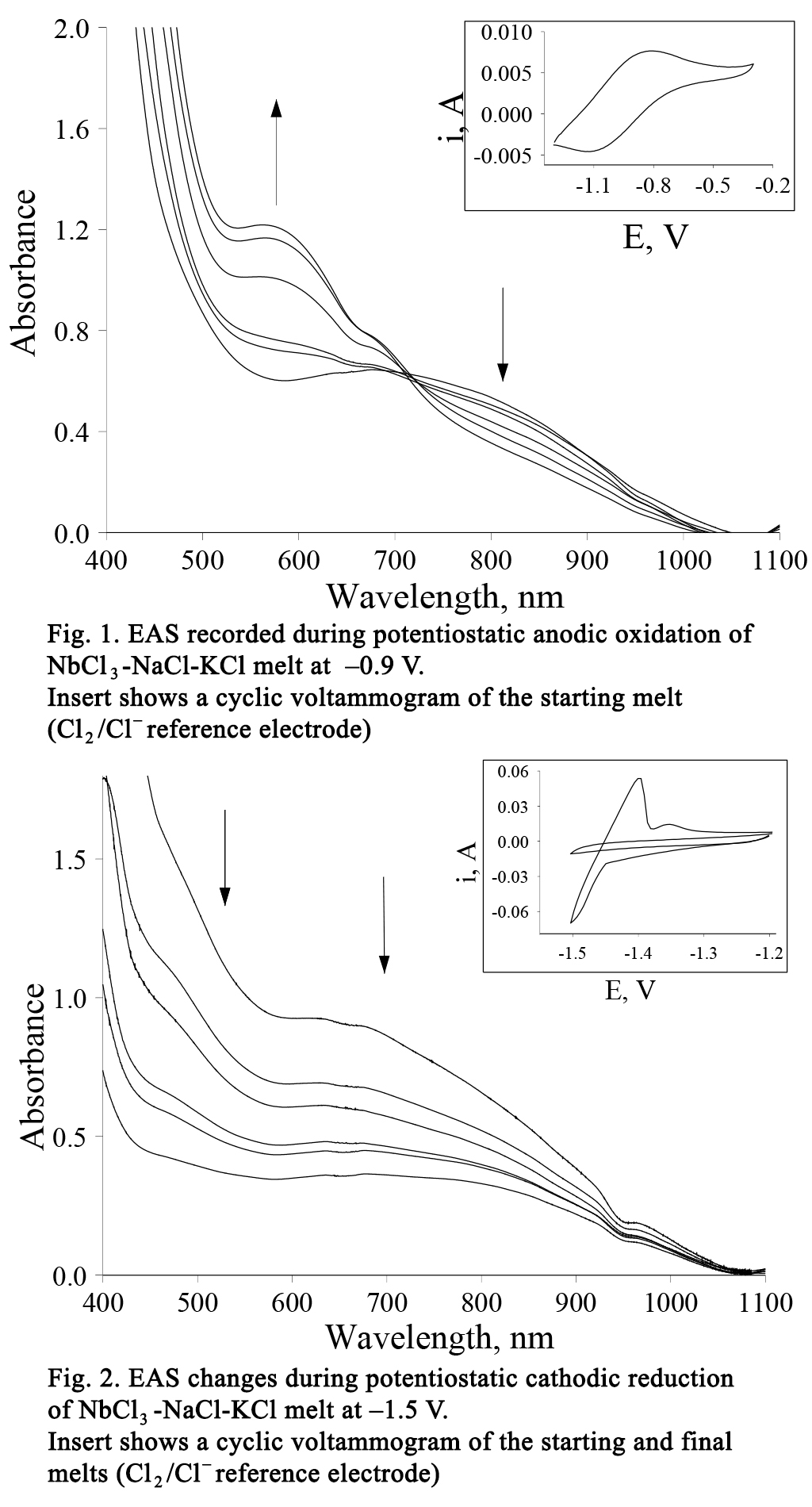