In the solid state reaction, we performed wet mixing of Bi2O3 and KHCO3 TiO2 Fe2O3 Nb2O5 Ta2O5 at specific ratios. After wet mixing, the materials were calcined and then sintered. The powder obtained by the synthesis was then molded into pellets, and the bulk ceramics were made by sintering. As for all the synthetic process, sintered processes were carried out at 1000oC in air for 4 h.

It was found by the powder XRD that the obtained all ceramics could be identified as a single phase regardless of the chemical composition. From observations of the surface morphologies of the sintered bodies by SEM, the pellets were sufficiently dense in all the prepared compounds to measure the electrochemical properties. As an example, Fig. 1 shows the applied field dependence of the remnant polarization(Pr) of BKTBF, KN2.5, KN5, KT2.5, KT5. The higher remnant Pr was obtained in KN2.5, KN5, KT2.5 than BKTBF. Figure 2 shows the applied field dependence of the coercive field
(Ec). KN2.5, KN5, KT2.5, KT5 exhibited lower Ecthan BKTBF.

As described above, it was demonstrated that the  chemical composition affected the ferroelectric and piezoelectric properties. In order to clarify the origin of these features, we carried out the Rietveld analysis using synchrotron X-ray diffraction and neutron diffractions, and investigated the structural changes. From the result, a good fitting was obtained by using a two-phase model of the tetragonal (P4mm) and rhombohedral (R3c) structures. 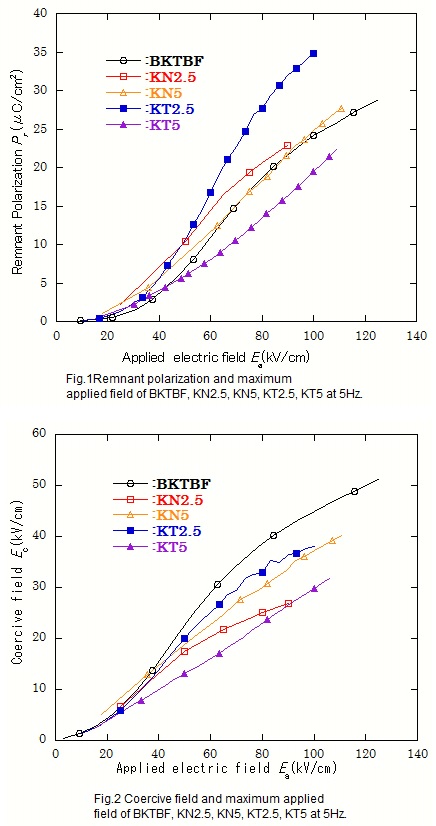