The solid solution materials of Li2MnO3-Li(Mn,Ni,Co)O2  show high electric discharge capacity. However, detachment of oxygen, hydrogen, carbon dioxide causes irreversible capacity at initial charge and discharge1). It was reported that oxygen in particular induced the irreversible behavior and extracted from the structure, which causes irreversible capacity and degradation of cycle performance2). However, the change of the crystal structure during electrochemical cycling of the sample which a quantity of oxygen decreased has been not clarified. In restraint of the oxygen detachment by the reduction heat-treatment was tried to solve this problem and examined properties of matter, a crystal, electronic structure, battery properties. In this work, it was intended to clarify the influence that reduction heat-treatment gave to a crystal and electronic structure during electrochemical cycling about 0.5Li2MnO3-0.5LiMn5/12Ni5/12Co1/6O2 (Li1.2Mn0.5667Ni0.1667Co0.0667O2).

The 0.5Li2MnO3-0.5LiMn5/12Ni5/12Co1/6O2 was prepared by the coprecipitation method. The reduced sample material was obtained by heat treatment under vacuum atmosphere (800℃, 10-4Pa, 4h). The provided samples were identified by powder X-ray diffraction and measured for the valence of the transition metals by potential difference titration and for the chemical composition by ICP-OES. The cathode used by electrochemical measurement performed blend kneading on fire in active material : AB : KS-6 : PVdF (80 : 5 : 5 : 10 wt. ratio) in NMP.  The slurry was then casted onto Al foil of current collector and dried at 100℃. The electrode was pressed with a pressure of 40MPa. The cells were assembled by using lithium foil as the counter electrode and a polypropylene film as the separator. The electrolytes were 1 M LiPF6 dissolved ethyl carbonate (EC) and dimethyl carbonate (DMC) in a volume ratio of 1/2. The electrochemical cycles were performed with the current density of 20 mA/g and the voltage range of 2.5-4.8 V vs. Li+/Li. After having dismantled it, the electrode in the cell was picked up (active material of ca. 10 mg) and was measured by synchrotron X-ray diffraction (BL02B2, BL04B2, Spring-8) and by neutron diffraction (iMATERIA, J-PARC). A provided diffraction patterns were analysed by the Rietveld method and were examined in the average structure. The XAFS analysis was also carried out to real the local structure. Based on Pair Distribution Function method (PDF), the local structures were also analyzed using powder X-ray total scattering.

From powder X-ray diffractions, it was found that a product can be attributed to a single phase of the layered structure with space group of C2/m. The ratio of peaks in the diffraction pattern changed after reduction heat-treatment. As a result of ICP-OES, composition of lithium for the transition metal decreased from 1.165(5) to 1.093(4) after reduction heat treatment. The coulombic efficiency of the initial cycle was improved 73% to 77% by reduction heat-treatment By The synchrotron X-ray diffration, the lattice constants of the reduced sample increased from untreated one. The neutron diffraction of the electrode after initial charge-discharge process was measured to clarify the structural change during the first Li extraction/insertion process. Mn-ordering increased after the reductive heat treatment while oxygen amounts and the cation-mixing decreased. In the local structural information of the EXAFS for reduced sample also showed the increase of Mn- and Ni-ordering (Fig. 1). It was suggested that the diffrence of the both samples, a local change was seen in structure after an electric discharge by Pair Distribution Function method (Fig. 2). 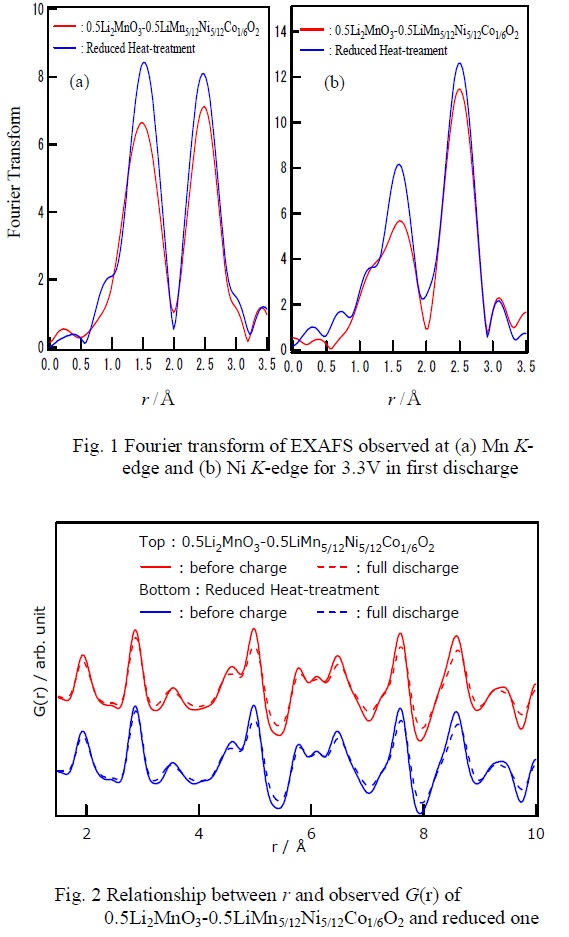