Ferroelectric and piezoelectric properties are observed in some inorganic compounds, and the materials are expected to be applied for electronic devices like a memory. Among these material, Pb(Zr,Ti)O3-based ceramics are widely used in piezoelectric devices because of their excellent properties. It has been also reported that photovoltaic effect can be observed in the materials where Pb is substituted partially by La, i.e., (Pb,La)(Zr,Ti)O3 1). In addition, we reported that ferroelectric properties and crystal structures of (Pb,La)(Zr,Ti,Nb)O3 2) and discussed the simultaneous substitutions of La and Nb. These previous works demonstrated that both the La and Nb substitutions affected considerably the ferroelectric properties and the crystal and electronic structure of  Pb(Zr,Ti)O3-based materials, but influences of the rare earth species (RE) and Zr/Ti ratio on these properties in (Pb,RE)(Zr,Ti,Nb)O3 are ambiguous at the moment. In order to clarify them, we synthesized Pb(Zr1-xTixNb0.03)(1-0.03/4)O3 (PZTN) and (Pb0.97RE0.03)(Zr1-xTixNb0.03)(1-0.03/4)O3(PREZTN) by the solid-state method in this work. By carrying out powder neutron diffraction measurement, we examined a relation between the dielectric, ferroelectric properties and replacement species, Zr/Ti ratio from the viewpoint of the crystal structure.

PZTN and PREZTN powders with PbSiO3 (PSO) addition were synthesized by a solid-state method using PSO, PbO, La2O3, Nd2O3, ZrO2, TiO2 and Nb2O5. After wet mixing, mixtures of these starting materials were heated at 1000 oC for 6 h in air. The samples were then molded into pellets at uniaxial pressure of 40 MPa, and heated at 1150 oC for 2 h in lead atmosphere.

Identification of the phases and evaluation of the lattice parameter were carried out by X-ray diffractions (XRD). Compositions of metal constituents were measured by the inductively coupled plasma (ICP) analysis. Relative densities of the ceramics were estimated by the Archimedes method. Surface and cross-section morphologies of the samples were observed by the scanning electron microscope (SEM). P-E hysteresis loop measurements were carried out at various frequencies using a TF-2000FE device (aixACCT) with the virtual ground mode. Temperature dependences of dielectric permittivities (es) and dielectric losses (tand) of the samples were measured by a LCR meter (HP-4284A). For average crystal structure analysis, we performed Rietveld analysis (RIETAN-FP) using synchrotron X-ray diffractions(BL02B2, SPring-8). Electron densities were determined by the maximum entropy method (MEM) using the Dysnomia program. For local crystal structure analysis, we performed both the Rietveld analysis (GSAS) and pair distribution function (PDF) analysis (PDFgetN, PDFFIT) using powder neutron total scattering data(HIPPO, LANSCE).

PZTN and PREZTN could be identified as a single phase (P4mm) by the powder XRD. SEM and the Archimedes method revealed that densities of PREZTN were higher slightly than that of PZTN although all the samples had sufficient densities to measure ferroelectric properties.

Figure 1 shows the P-E hysteresis loop of PZTN and PREZTN. The samples with the RE replacement showed higher remanent polarization (Pr) and lower coercive field (Ec) than PZTN.  One of the reasons may be due to the higher density. In the dielectric measurement, it was found that the Curie temperature (Tc) was reduced and a dielectric curve become broader by replacing RE for Pb.

From the result of the Rietveld analysis using synchrotron X-ray diffractions of these samples, it was indicated that (Zr, Ti, Nb)-O6 octahedral distortion were relaxed by the RE substitution. This fact suggests that the relaxation of the crystal lattice distortion affects the decrease of Tc. Figure 2 shows line profiles of electron density distributions analyzed by MEM. Considering that a change in electron density between (Zr, Ti, Nb) and O reflects a change in the bond strength, it suggests that the RE substitution has an influence on the bonding state of (Zr, Ti, Nb)-O. We also performed the local structure analysis using powder neutron total scatterings. 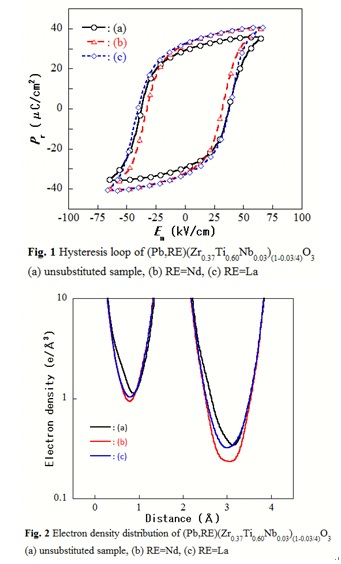