The LaNiO3 is an alternative cathode material of NiO for molten carbonate fuel cells (MCFCs) because of extremely higher stability than NiO in molten carbonates.1 In our previous study, the activity of the LaNiO3 was not less than that of NiO for the oxygen reduction reaction (ORR) on a meniscus electrode.2However, the activity should separate charge transfer and mass transfer enough.

In this study, the charge and mass transfer of the ORR on LaNiO3 and NiO have been evaluated by the potential step method (PSM) and the steady method (SM) on a meniscus electrode to discuss the ORR activity and mechanism of the LaNiO3for MCFC application.

The apparent exchange current density: i0, and the cathodic symmetry factor: ac were determined by mass transfer free polarization curves with the Allen-Hickling plot of following the Butler-Volmer equation. The dependence of i0on gas composition is as follows

where i00, a, and b were the standard exchange current density and the apparent reaction orders for O2 and CO2, respectively.

The limiting current density: ilc, was determined with the polarization curves with mass transfer resistance and the i0from the Butler-Volmer equation as follows.

where Rf and i were roughness factor and current density per geometric area. The dependence of ilcon gas composition is as follows

Li/Na (=52/48 mol%) or Li/K (=62/38 mol%) molten carbonate saturated La2O3 (1.5mol%) were used as an electrolyte. The working electrode was the LaNiO3or NiO coated Au ring whose height was controlled by a micrometer.  Reference electrode was a reversible oxygen electrode (ROE), and counter electrode was a gold coil electrode.

The LaNiO3 powder was prepared by the thermal decomposition of the mixture of lanthanum nitrate hexahydrate and nickel acetate tetrahydrate at 1073 K for 12 h in air.3 The LaNiO3 powder was sintered on a gold ring at 1273 K for 48 h while NiO (wako, 99.9%) was sintered at 1073 K for 12h.  Specific surface area of the electrode was evaluated with the BET specific surface area of the LaNiO3or NiO powder after sintering at each condition.

The ORR was determined in ambient pressure with oxygen partial pressure (pO2) range from 0.02 to 0.9 atm, and carbon dioxide pressure (pCO2) range from 0.001 to 0.9 atm in an argon-balance.  The temperature was at 923 K. The chronoamperometry (CA) from 10 to -10 mV vs. ROE was performed for 600s. The meniscus height was h=2mm of the PSM for mass transfer free polarization. The initial current density was evaluated by extrapolation to t=0 with the linear relation between current and the square root of time. The meniscus height was h=4mm of the SM with mass transfer resistance. The current density was evaluated by the average value for 500~600 s of CA.

The i0 and as a function of the pO2 or pCO2 on LaNiO3 or NiO electrode in Li/Na or Li/K molten carbonate were shown in Fig. 1.  The i0 on LaNiO3 electrode was not less than that on NiO electrode in both electrolytes. The a, and b were 0.39 ± 0.08 and -0.18 ± 0.04 for both the electrolytes and the electrodes, respectively. Since the percabonate path mechanism (PCP) whose a and b, were 0.5 and 0 while those of the peroxide path mechanism (POP) were 0.5 and -1.0, the reaction on LaNiO3for the ORR might be mixed mechanism of POP and PCP. 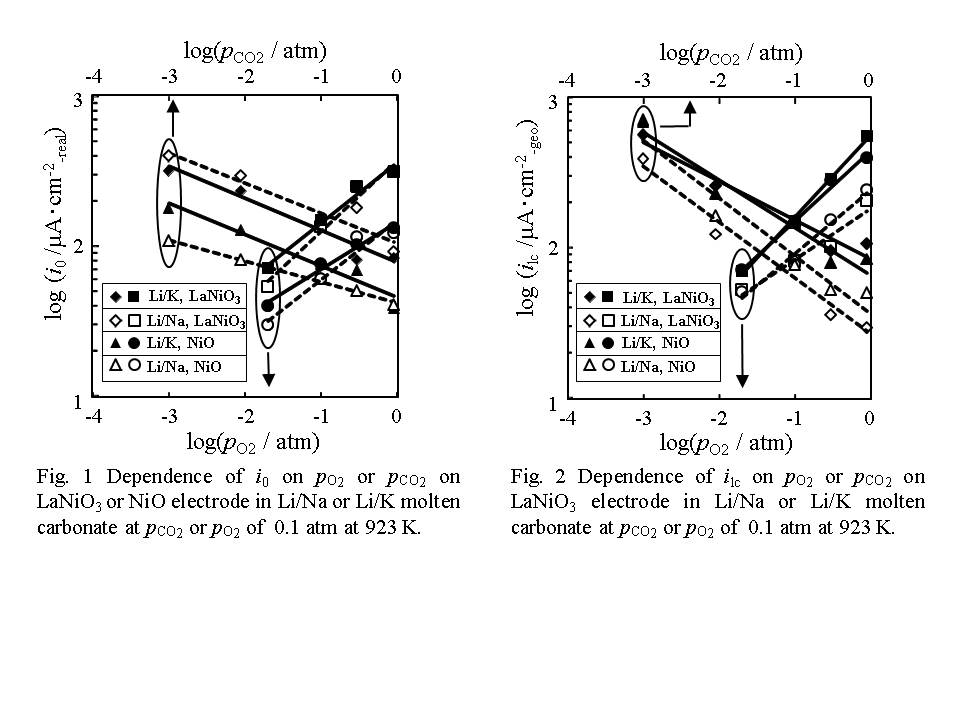