Magnesium (Mg) is getting a lot more attention as a negative electrode material for a next generation secondary battery because of its high energy density (3839 mAh cm–3), negative electrode potential (–2.356 V vs. SHE) and natural abundance. Although some groups have reported the Mg deposition/dissolution process in ethereal solutions, these electrolytes (e.g. Grignard reagent) are too dangerous to put into practical use due to their high volatility and flammability [1]. In 2013, Abe et al. showed the reversibility of Mg deposition/dissolution in glymes dissolving MgCl2 and AlCl3­ [2]. Since glymes have high boiling points and burning points over 100 ˚C, this report promises the practical realization of Mg-secondary battery.

Previously reported electrolytes, including Abe’s, for Mg batteries mainly consist of halide compounds where Mg-halogen-ether complexes are electrochemically active. However, halide anions can be anodized to generate halogen gas which have high environmental burden. Recently, we have reported the electrodeposition of Mg from the safe electrolyte for practical use without halide anion at room temperature [3]. This electrolyte contains diglyme (G2) and ionic liquid (IL) n-methyl-n-proplylpiperidinium bis[(trifluoromethyl)sulfonyl]amide (PP13-Tf2N) as solvents, and a simple amide salt Mg(Tf2N)2 as a solute. In previous report, we prepared PP13-Tf2N and G2 mixture 1:4 by volume dissolving 0.1 M Mg(Tf2N)2 (Mg2+ : PP13-Tf2N : G2 = 1:7:56 by mol). However, this mixture mainly consists of glymes (80 volume%); in this report, we investigated electrochemical properties of electrolytes where the fractions of glymes were reduced.

Figure 1 shows the cyclic voltammograms (CVs) measured in these electrolytes. For comparison, Fig. 1a is the previously reported CV for Cu electrode in the G2 mixture at a ratio of Mg2+ : PP13-Tf2N : G2 = 1:7:56 by mol [3]. G2 (Fig. 1b) and G4 (Fig. 1c) mixtures demonstrate the reversible deposition/dissolution process of Mg with large current density and, in 1:7:8 G2 mixture, got larger current density than that Fig. 1a. Although kinematic viscosities of all 1:7:8 mixtures were an order of magnitude higher (25.2—26.0 mm2 s–1) than the case for Fig.1a (1.31 mm2 s–1), the conductivities were comparable (2.59—3.82 mS cm–1) [3]. Therefore, the increase in balk concentration of Mg2+ with remaining high ion conductivities helps to get large current densities.  While cathodic overvoltage of Mg deposition was not observed in the 1:7:56 G2 mixture, those in the 1:7:8 mixtures were about 0.2 V, probably due to the change of WE from Cu to Pt. All CVs show the large overvoltages of anodic dissolution, probably because of the formation of surface passivation films. Enhancement of the anodic dissolution process is the challenge for the future.

Figure 2 is the photograph and SEM images of Pt electrode after galvanostatic electrolysis in the G4 mixture at 1.5 mA cm–2 for 5685 sec up to 15 C. We obtained flat deposits with metallic luster and it turned out to be elemental Mg by X-ray diffraction. The deposits were not round [3] but angular with a smaller diameter of few micrometers; the SEM images also confirmed that the deposits were not dendritic. 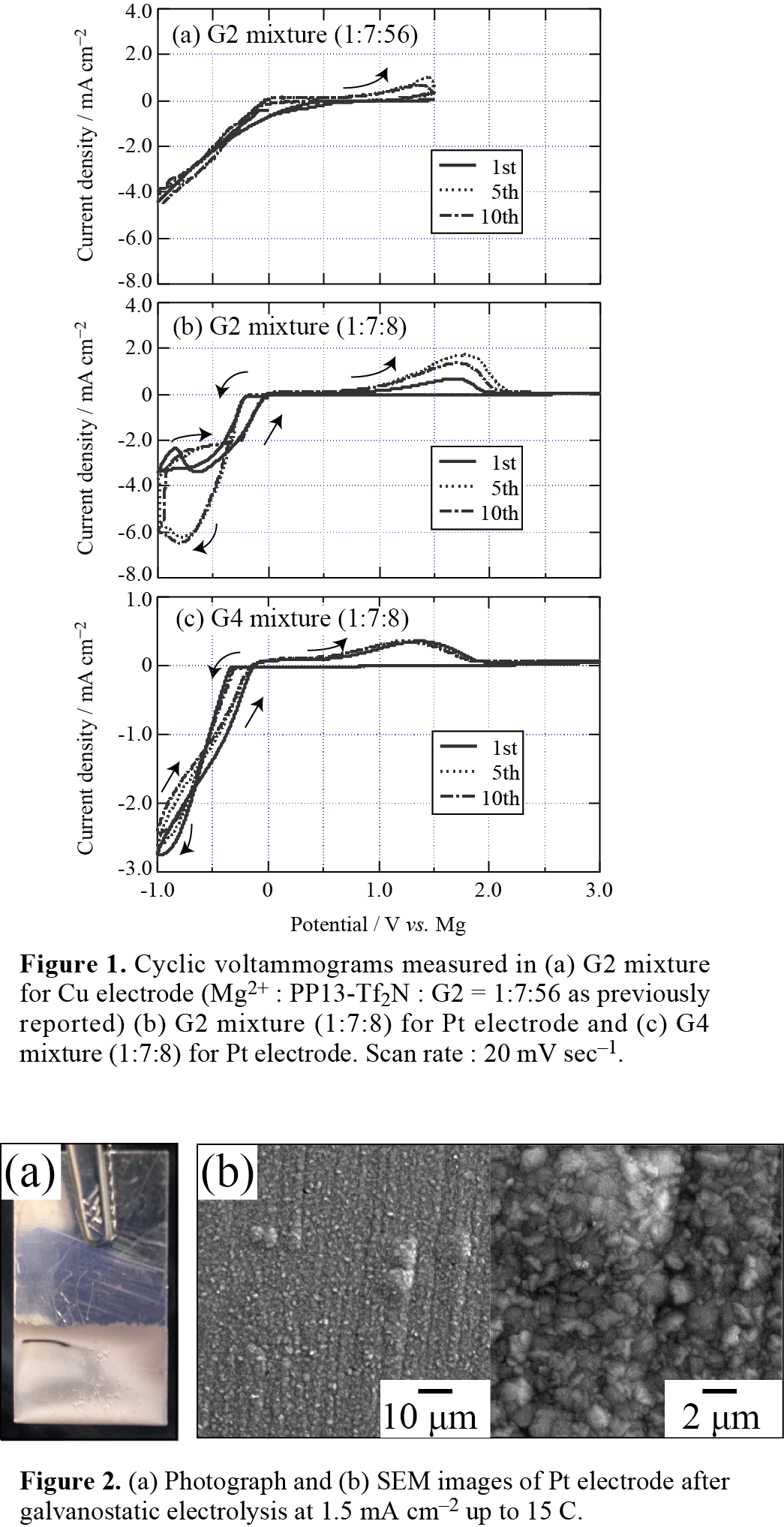