Sunrise, 2nd Floor, Galactic Ballroom 1 (Moon Palace Resort)
J. T. Herb, C. Nist-Lund, and C. B. Arnold (Princeton University)
Battery chemistries based on multivalent ions are beginning to receive considerable attention from both researchers and industry because it is possible to transfer more than one electron per metal atom. Magnesium-ion systems in particular have been the subject of a great deal of research because of the ability to use metallic magnesium anodes for high energy density, and as such the capacity of the cell is limited only by the cathode material. One of the biggest hurdles that is limiting progress in this area is the development of electrolytes that facilitate the reversible deposition of magnesium metal. The current state of the art electrolytes are based on of Grignard-derived Lewis bases paired with Lewis acids such as aluminum chloride.[1] The presence of chloride ions in these solutions has proven to be problematic because they cause pitting and corrode parts commonly used in coin cells, namely stainless steel.[2] In recent years, other researchers have explored various alkoxide-based electrolytes, but these solutions also employ Grignard reagents.[3–5] As such, it is imperative that researchers identify pathways that can result in halide-free electrolyte solutions.

We have identified a synthesis pathway to produce viable Mg electrolytes that does not require Grignard reagents. The Mg source is derived from various alcohols in a simple one-step reaction. The electrolyte is composed of the alcohol-based magnesium compound and a Lewis acid (AlCl3) in an ethereal solvent. Figure 1a shows the cyclic voltammetric behavior of the electrolyte solution as a function of the amount of AlCl3 in the system, and that the optimal molar ratio of the two components is in the range of a 1:1 or 1:2 mixture. The oxidation limit of the 1:1 mixture is as high as 2.9 V vs. Mg, which is comparable to other alcohol-based electrolytes in the literature. Additionally, Figure 1b and 1c show EDX and SEM data indicating that the resulting magnesium deposits are of good purity. We will discuss the effects of different Lewis acids on these magnesium sources, using NMR and Raman spectroscopies to determine speciation in a range ethereal solvents. Deposition behavior and conductivity as a function of solution composition will be discussed. 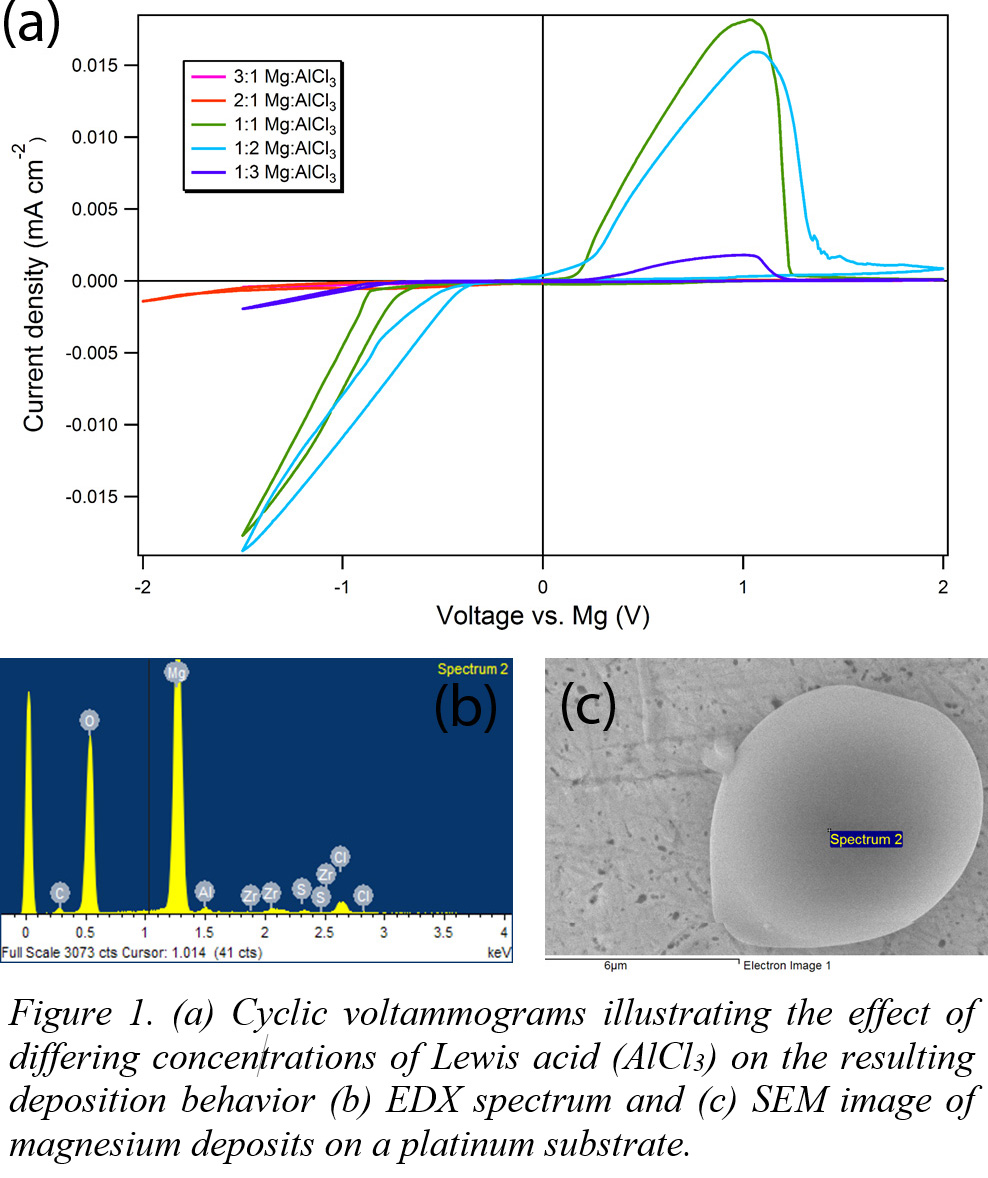