Development of non-platinum electrocatalysts for oxygen reduction reaction (ORR) is required for real commercialization of polymer electrolyte fuel cells. We focused on high stability of group 4 and 5 metal oxide-based compounds in acidic media. Recently, we found that group 4 and 5 metal oxide-based compounds prepared by oxidation of oxy-metal phthalocyanines under low oxygen pressure with multi wall carbon nanotube (MWCNT) as support had high ORR activity1,2). MWCNT and deposited carbon which was formed with thermal decomposition of the oxy-metal phthalocyanine works as electron conduction pass, but they are oxidized at high potential. Therefore, we need to prepare carbon free (all oxide-based) electrocatalysts to demonstrate that the oxide-based cathodes have high durability.

In this study, we prepared all oxide-based cathodes which were composed of titanium magneli phase (Ti4O7) as electric conductive3)and complex oxide with oxygen vacancies as active sites.

TiO2 nano-powder was mixed with transition metal oxides such as Nb2O5, Ta2O5, or ZrO2 with the weight ratio of 8:2, respectively. The mixtures were ball-milled at 600 rpm in 180 min to form complex oxides. They were reduced at 1050oC in 4%H2/N2 for several ten hours to form Ti4O7 and complex oxide with oxygen vacancies (Ti4O7+TixM(Nb,Ta,Zr)yOx).

All electrochemical measurements were performed in 0.1 mol dm-3 H2SO4 at 30oC with a 3-electrode cell. Working electrode was glassy carbon rod with Ti4O7 + M(Nb,Ta,Zr)Ox of 0.25 mg. A reversible hydrogen electrode (RHE) and a glassy carbon plate were used as a reference and a counter electrode, respectively. Slow scan voltammetry (SSV) was performed with a scan rate of 5 mV s-1 from 0.2 to 1.2 V vs. RHE under O2 and N2 atmosphere to obtain ORR current. ORR current density (iORR) was based on the mass of the catalyst powder. Triangular potential cycling between 1.0 and 1.5 V vs. RHE with a scan rate of 0.5 V s-1 was used as degradation test. During degradation test, the SSV was performed, and the durability was evaluated by ratio of iORR at 0.7 V before and during degradation test, N-iORR@0.7 V.

Figure 2 shows the degradation of |iORR at 0.7 V| during triangular potential cycling between 1.0 and 1.5 V vs. RHE of Ti4O7+TixNbyOz. The degradation behavior of zirconium oxide-based compounds prepared by heat treatment of oxy-metal phthalocyanines under low oxygen pressure with MWCNT as support, Zr-CNO/MWCNT1,2) was also plotted for comparison. The durability of Ti4O7+TixNbyOzwas much higher than the durability of Zr-CNO/MWCNT in high potential region. Therefore, we successfully demonstrated that the carbon free (all oxide-based) electrocatalyst had high durability in high potential region. 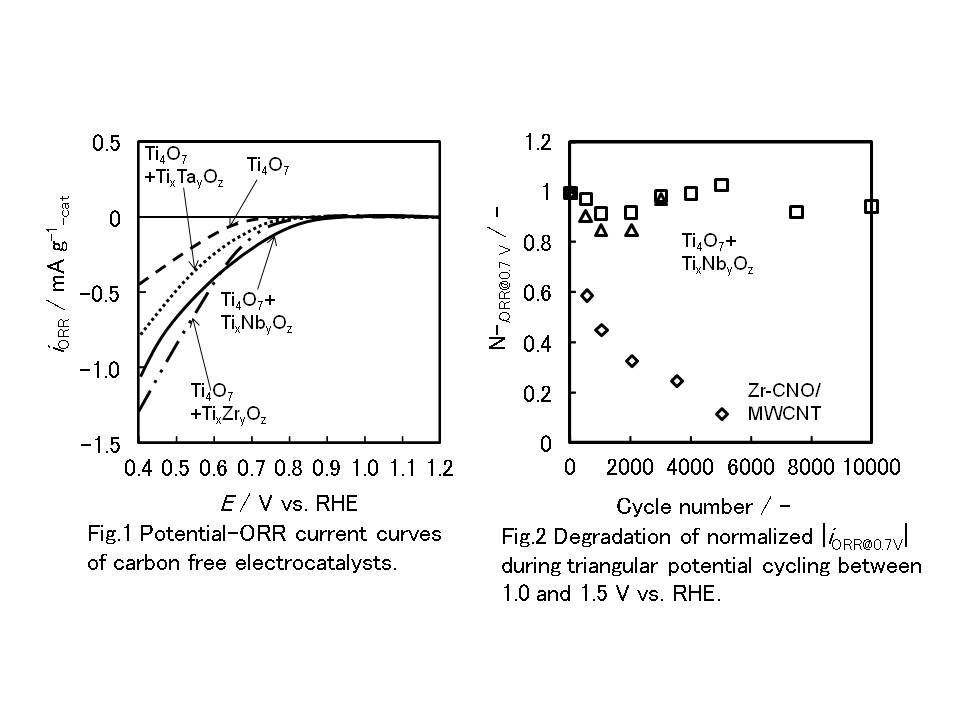