Expo Center, 1st Floor, Universal 14 (Moon Palace Resort)
P. Malacrida, M. Escudero-Escribano, A. Verdaguer-Casdevall (Technical University of Denmark), U. G. Vej-Hansen, J. Rossmeisl (Technical University of Denmark (DTU)), I. E. L. Stephens, and I. Chorkendorff (Technical University of Denmark)
The development of economically viable and efficient low temperature fuel cells requires a substantial improvement of the oxygen reduction reaction (ORR) catalysts at the cathode. Alloys of Pt and late transition metals have exhibited high activities, but typically suffer from a fast degradation due to dealloying [1-2]. Not only do polycrystalline alloys of Pt and a lanthanide metal (La, Ce, Gd) exhibit very high catalytic activity, but they should also be inherently more stable than alloys of Pt and late transition metals, due to their very negative heat of alloy formation [3-5]. In this work, sputter-cleaned Pt5La and Pt5Ce present more than a 3-fold activity enhancement compared to polycrystalline Pt with only minor losses after accelerated stability tests (Fig. A). The extensive combination of electrochemical and physical techniques, including Angle Resolved X-Ray Photoelectron Spectroscopy (AR-XPS) and Low Energy Electron Spectroscopy (LEIS) makes these polycrystalline samples excellent model systems towards the design of cathode catalysts. The active chemical phases, which are still largely debated, have been elucidated by AR-XPS (Fig. B). La and Ce oxides are formed on the surface of the alloy under air-exposure but they are readily removed by acid leaching during ORR activity testing. A ~3 monolayer thick Pt overlayer is formed and provides kinetic stability against further dealloying during cycling (Fig. C). Investigating the nanoscale properties of these overlayers is a fundamental step towards understanding their catalytic performance. The level of strain relative to pure Pt is responsible for the enhanced activity. It turns out that the thickness of the overlayer defines the level of strain relaxation and provides details about the dealloying mechanism.

Fig. (A) Kinetic current density measured at 0.9 V of Pt5Ce, Pt5La and Pt before and after a stability test consisting of 10 000 cycles between 0.6 and 1.0 V vs. RHE at 100 mV s−1. (B) Ce 3d XPS spectra of Pt5Ce after electrochemical measurements showing only metallic components. (C) AR-XPS depth profile of Pt5Ce after ORR testing (solid line) and after stability test (dashed line). In the inset, illustrative structure of acid leached Pt5Ce. 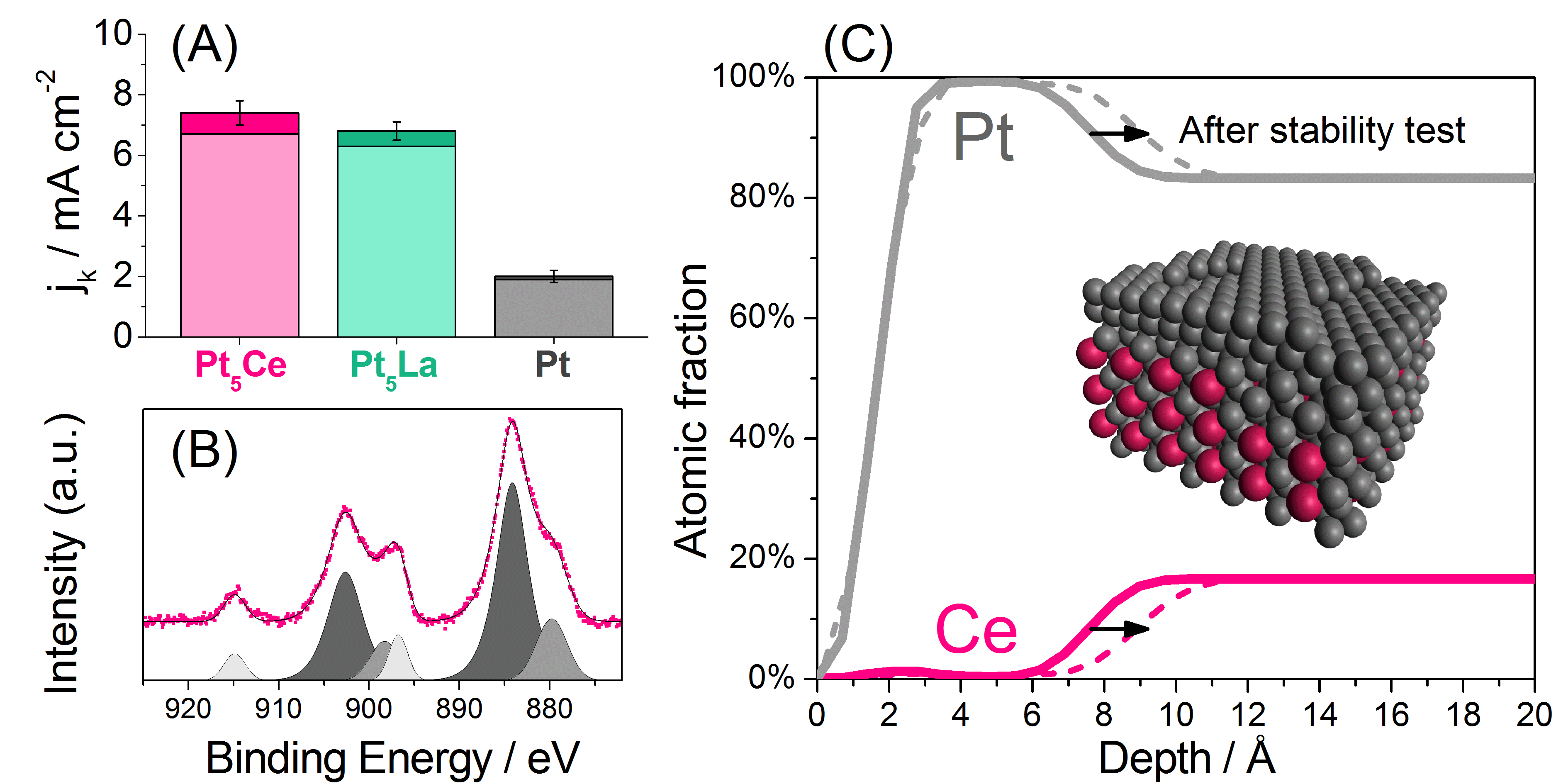