Room temperature ionic liquids (RTILs) are under consideration for the replacement of organic electrolytes since they have a fair ionic conductivity (~1-10 mS.cm-1) and a broad temperature operating range, but their main advantage is related to their safety compared to standard organic solvents. Indeed, RTIL show negligible volatility and no flammability when chosen adequately. RTILs are only composed of anions and cations (without any solvent) and are liquid around room temperature. The use of RTIL in different designs can further improve their properties. One of the most interesting examples is their confinement in a host matrix, which prevents from any possible leakage, and in which their liquid state properties are maintained. Such an electrolyte, named ionogel, could permit to increase considerably the safety of energy storage devices such as EDLCs, based on both RTIL properties as well as on their solid-like shaping.

Typical activated carbon electrodes (Norit S50 as activated carbon / Super P as conductive carbon / PVDF-HFP as binder with respective proportions 80 / 10 / 10 wt%, overall ~1mg.cm-2) were deposited onto aluminium current collectors for prototyping. The ionogel was synthesized via sol-gel route with alkoxysilane as silica precursor, RTIL as solvent and formic acid as sol-gel catalyst: the resulting monolithic mesoporous silica hosts the RTIL. The reactants were mixed and casted onto carbon electrodes during a single step process. At the same time, a thick, self-standing, ionogel (Fig. C) was made for ionic conductivity measurements. After 5 days of aging, the ionogel was dried in a Buchi (60°C, 0.5 mbar) overnight to remove the residual water. The ionic conductivity of the ionogel, measured in a Swagelok cell under argon, was 1.5 mS.cm-1at 20 °C.

A symmetric all solid state EDLC was assembled using two carbon electrodes with ionogel deposit. After drying following previous process, the device was compared with an EDLC using glass microfiber separator impregnated with the same pristine RTIL. All electrochemical measurements were performed under argon. Cyclic voltammetry experiments (Fig. A) demonstrated no capacitance loss when the ionogel was used instead of the pristine RTIL, and the electrochemical stability was maintained up to 2.5 V. An acceptable value at 80 F.g-1 for the gravimetric capacitance was reached; this showed a good impregnation of the activated carbon by either the pristine RTIL or by the ionogel sol precursors. Galvanostatic cycling was performed between 0 V and 2.5 V at 1 mA.g-1 for 10,000 cycles (Fig. B) with efficiency above 98 % and no significant capacitance loss. 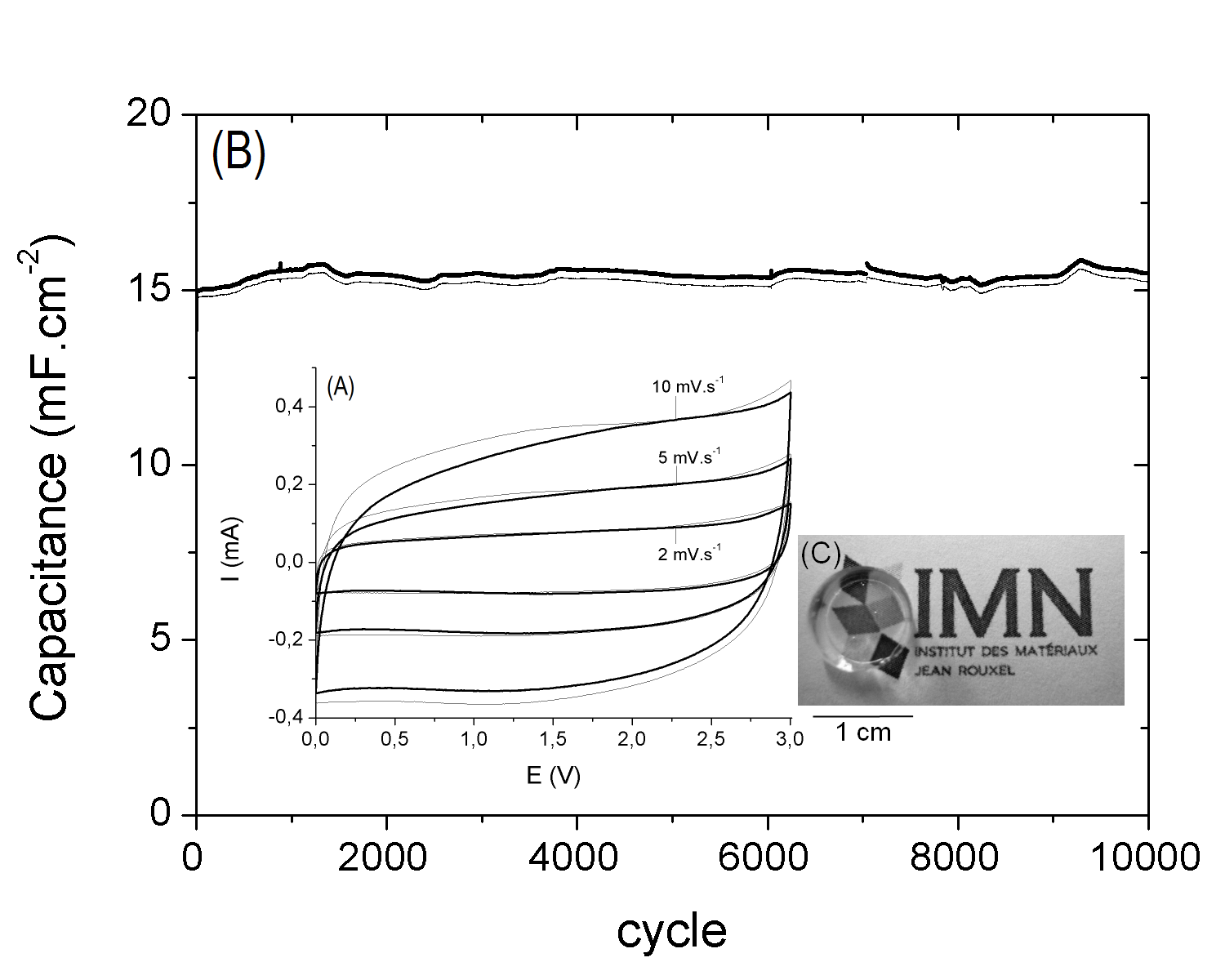